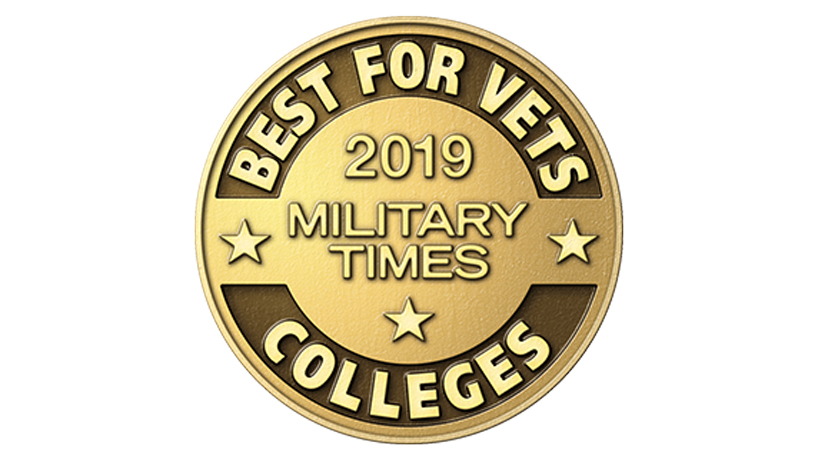 Military Times named UMSL to its “Best for Vets Colleges” list for the fifth consecutive year.

The University of Missouri–St. Louis continues to be recognized as a place that welcomes student veterans and gives them support and the opportunity to thrive.

For the fifth straight year, Military Times named the university to its “Best for Vets: Colleges” list, unveiled on Monday. UMSL was the highest-ranked institution in the St. Louis region, landing 46th on a list of 137 four-year universities. There were a total of 208 institutions listed in the rankings, divided into categories for four-year, two-year, online and nontraditional schools, and career and technical colleges.

“This university has committed itself to veterans and veterans programs for six years now, so I’m unsurprised that it continues to get recognized,” said Jim Craig, chair of the Department of Military and Veterans Studies. “Regionally, we’re the most capable and the most supportive of veteran programs, and we should be. We’re the state metropolitan, land-grant, public institution.”

Military Times prides itself in providing editorially independent, objective and rigorous rankings. It evaluates many factors that help make colleges and universities good fits for service members, military veterans and their families. About 500 colleges took part in this year’s survey.

“Military Times’ Best for Vets designation is trusted throughout the veteran community as the mark of excellence for schools and other organizations that work with veterans, service members and military families,” said George Altman, the Military Times editor in charge of the rankings. “It can’t be bought with advertising dollars – unlike some other supposedly veteran-friendly rankings – only earned through a record of steadfast service and dedication to those who have served.

“Fewer than half of the roughly 500 colleges and universities that competed for the recognition earned the right to call themselves Best for Vets in 2019. Their efforts should be commended.”

Craig pointed to the Veterans Center, led by Josh Perschbacher, as the biggest support for military-connected UMSL students, who this semester number 429 across campus.

“There are veterans helping veterans to figure out how to do college in the center,” Craig said. “The second thing that I think veterans are surprised to find is that the faculty and staff are very supportive of them and of their academic endeavors. As an example, just this last year, without our prompting, the Faculty Senate approved a measure so that any veteran on GI Bill benefits gets to register on Day 1. They did that because they recognized that the benefits are limited, and if they end up wait-listed or they miss classes, then they may run out of benefits. We didn’t ask for that. The faculty and staff came to us and asked if this was something that was valuable.”

UMSL has had more than 400 military-connected students on campus each of the past three years, and Craig is even more proud that 100 or more veterans have graduated each year during that span.

“They’re getting through,” he said. “They’re feeling success, they’re connecting to the campus, and then they’re moving out into the business world or wherever their jobs take them.

“We need to keep pushing. We need to find more ways to support, and we need to make sure that we’re graduating student veterans and making sure that they’re getting good jobs in the St. Louis area and that they become productive members of our St. Louis society.”