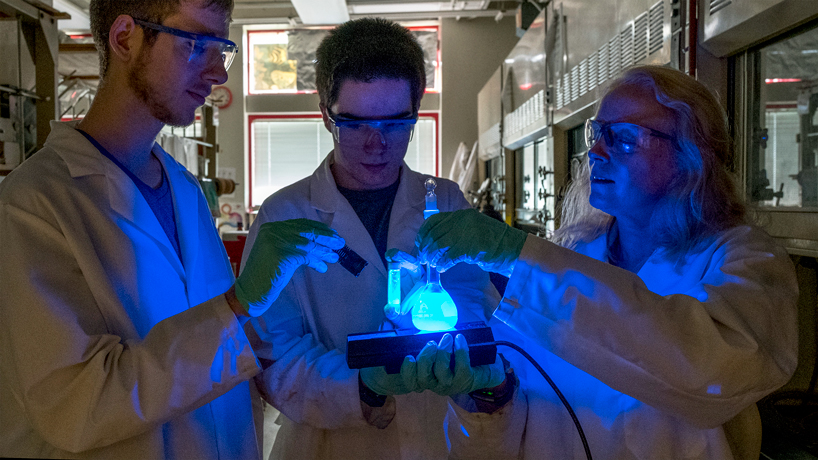 The $9,831,786 in grants awarded to the University of Missouri–St. Louis in the first quarter of the new fiscal year means amplified support for faculty research that stretches across colleges, centers and departments.

Research and development spending totaled more than $24 million in FY18, an increase of nearly $4 million over the previous fiscal year. According to the UM System dashboard, UMSL researchers already have earned close to $5 million in new grants in the first quarter of FY19.

“While the landscape for university research has become more challenging, UMSL’s research growth is on an upward trajectory,” said Christopher Spilling, vice provost for research and a National Science Foundation grant recipient. “We are very pleased to see the steady increase in funding.”

A particular point of pride for the College of Arts and Sciences is an increase in the number of prestigious NSF awards. The college was awarded grants totaling $3,438,838 with Department of Chemistry and Biochemistry researchers bringing in $1,532,266 collectively. Chemistry and biochemistry investigators Alexei Demchenko, Keith Stine, Stephen Holmes, and Benjamin Bythell are all recipients of NSF awards as well as biology investigators Teresa Thiel and Nathan Muchhala.

The College of Education continues to bring in large foundation funding awards. The John Templeton Foundation awarded Mindy C. Bier, associate director for the Center for Character and Citizenship, $2.4 million over three years for her proposal “Can Leadership Values be Taught?” which initiates and tests a new professional development program for school leadership.

The Missouri Institute of Mental Health continues to lead the campus in the number and volume of awards and landed a collective $4,801,593 in grants. The U.S. Department of Veteran’s Affairs granted Assistant Research Professor Kimberly Werner $1,003,556 to study post-traumatic stress disorder and traumatic brain injuries in women survivors. Assistant Research Professor Rachel Winograd is leveraging more than $50 million in Substance Abuse and Mental Health Services Administration funding to fight the opioid epidemic in Missouri.

“Through research, knowledge generated here at UMSL ripples out into the larger world,” Spilling said. “Our goal is to continually add to that base.”