Since 2014, Bitran, who is Chilean-American, has been reinterpreting “Titanic” with an intentionally experimental shot-for-shot recreation. Her dynamic, long-term project has involved more than 500 participants from 15 cities across Chile and the U.S.

Students in U-M Stamps Professor Rebekah Modrak’s “Dressing Up & Down” course have created elaborate costumes and wearable props re-imagined from the scene in which passengers are thrown into the frigid waters around the sinking ship.

“My role as a faculty member co-leading the project with visiting artist Claudia Bitran has been to challenge and help students in the class synthesize multiple sources into each costume,” Modrak said. “Costumes will incorporate 1912 fashions of first- and third-class passengers, miniature icebergs in frozen waters of the North Atlantic Ocean, elements of life jackets, and the insignia of the Marines directing the ship.”

On Wednesday, Oct. 24, Stamps students and members of the U-M Synchronized Swimming Club will wear the costumes and re-create the scene from the film. The swimmers will perform a mash-up of choreography from their own routines and the original film. Bitran will direct and film the performance, and will incorporate this scene into her going “Titanic” film project.

Stamps students are making costumes for the swimmers and themselves to wear during the performance. Each will take on a different role, such as an elegant passenger floating by or even a chimney crashing from the ship into the water.

This is the first time the U-M Synchronized Swim Club has ever collaborated with an arts group on campus, Modrak said.

“These students exist between the world of art and athletics, skilled at performance and choreography,” she said. “With this collaboration, members are exposed to the possibilities of their practice within the field of art.”

In her remake of the film, Bitran is the only person who plays Rose, whereas, 36 different actors have played Jack, including a diverse group of men and women ranging in age from 7 to 60. 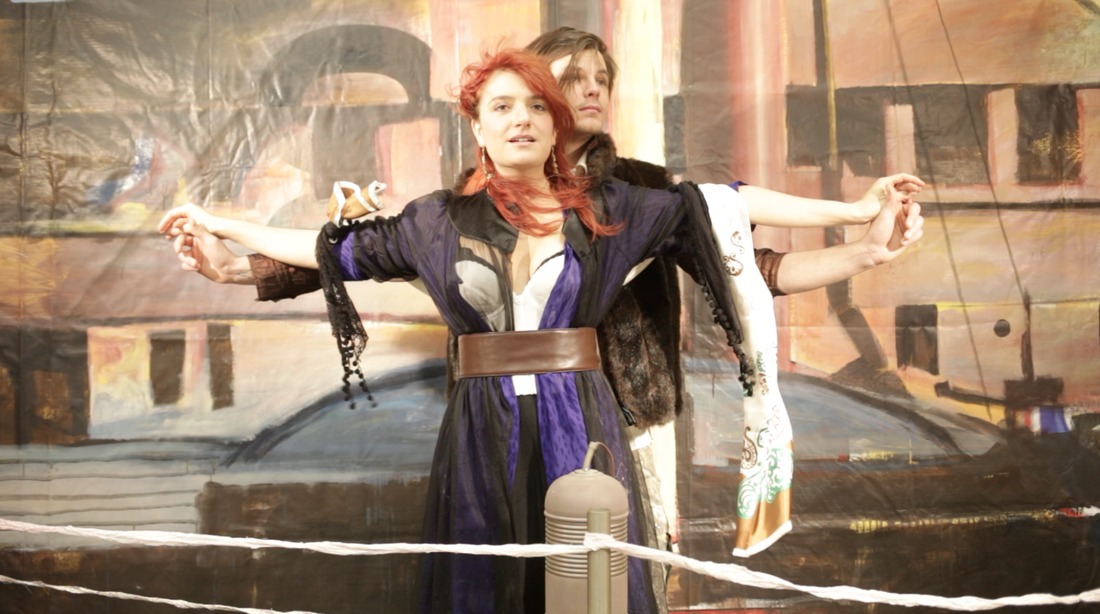 According to Modrak, the film upsets conventions of storytelling by constantly shifting not only the portrayal of characters but location and aesthetics.

“Bitran’s version of the film shifts the story from a traditionally male perspective to a female perspective,” she said. “In addition, this project challenges ideas that bigger budgets are better and calls for an appreciation of using humble, ordinary materials with humor and creativity.

“The project exposes artists and athletes from the U-M community to new perspectives of engagement and challenges their present notions of creating, performing and collaborating.”

The public is invited to attend the final performance and filming 9-11 p.m. Oct. 24 at U-M’s Canham Natatorium (500 E. Hoover Ave., Ann Arbor). The audience will be able to experience what it’s like to film on a live set and will be encouraged to participate.

Bitran is a multidisciplinary artist who works mostly in video and painting. She has a BFA from the Universidad Catolica de Chile (2009) and an MFA in Painting from the Rhode Island School of Design (2013). She was a resident at Skowhegan School of Painting Sculpture, Bemis Center for Contemporary Arts, Roswell Artist-in-Residence Program in New Mexico and Smack Mellon Studio Program in New York, and is currently a resident at Outpost Projects in Brooklyn.

Bitran is on campus this week as a Roman J. Witt Visiting Artist at the Stamps School of Art & Design. The project received funding from Arts at Michigan and U-M Athletics.