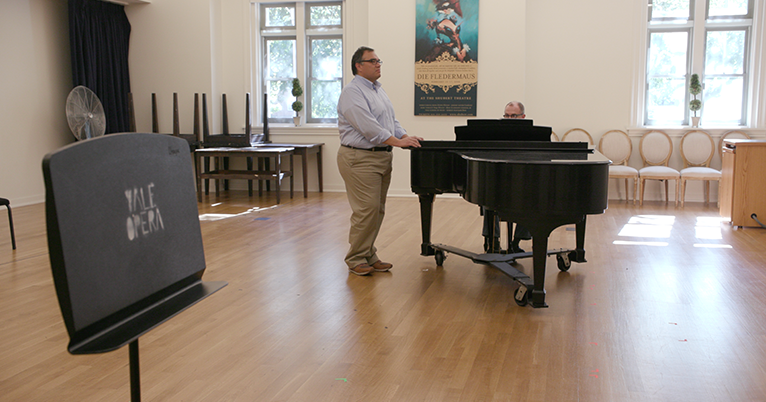 At a certain time in his life, Yale School of Music graduate Daniel Juarez M.M. ’02 aspired to a successful career as an opera star. These days, however, he measures success a bit differently.

Today, he says, he has the “best of both worlds”: a job at Yale and a relatively busy local career as an opera singer, often in the lead role.

“I’m not the textbook poster child for success for a Yale Opera singer,” acknowledges Juarez, a program coordinator for the Council of Latin American & Iberian Studies (CLAIS) at the Yale MacMillan Center. “I’m not performing at the Met or enjoying an international career. On the other hand, I’m still singing, and I get to wake up in my own home everyday and see my family.”

In Connecticut, Juarez is a familiar face on opera stages, most recently performing in the role of Cavaradossi in Puccini’s “Tosca,” produced by the Opera Theater of Connecticut. A critic for The Day newspaper of New London wrote that the Yale alumnus “turned in some bravura singing,” adding, “Juarez has a supple voice with a fullness not always heard among tenors on the opera stage.” Reviews of other operas in which he has performed have hailed him as “the evening’s emotional epicenter” (for his 2016 performance as Don José in the Connecticut Lyric Opera’s “Carmen”) and noted that he “almost stole the show” during that company’s 2013 performance of Erik in Wagner’s “The Flying Dutchman.”

His status as a local opera celebrity came after a hiatus following his graduation from the Yale School of Music. For a time, aside from occasionally singing at his church, he stopped performing entirely.

“During my time at the School of Music I had wonderful coaching and I learned a lot, but I think I wasn’t technically ready to take full advantage of the opportunity,” Juarez says. “The more I sang as a student, the more my deficiencies became apparent, and I wasn’t overcoming them. When I left Yale, I wasn’t ready for a singing career, so I stopped singing for awhile.”

The summer after graduation, Juarez took a temporary administrative job with the Yale World Fellows Program, which eventually became a permanent position for him. While his singing aspirations were on hold, he found his work at Yale highly fulfilling.

I met fantastic people and fell in love with my job … Fourteen-plus years later, I’m still here, and still enjoying my work at Yale.

“It was exciting to be part of a program with an amazing mission as the university focused on the goal of internationalization,” the staff member says. “I met fantastic people and fell in love with my job, so when I was offered a full-time job in the spring semester of 2003, I thought, ‘I really want to get back to singing, but it will be fun to do this [job] in the meantime.’ Fourteen-plus years later, I’m still here, and still enjoying my work at Yale.”

The CLAIS team “is small but mighty — and my colleagues make coming to work a lot of fun,” Juarez adds. “Council Chair Claudia Valeggia, Program Director Asia Neupane, our student workers, and I work hard on our mission to enhance the understanding of Latin America and Portugal at Yale.” Among many other projects, Juarez is working with Professors Albert Laguna and Reinaldo Funes on various activities related to CLAIS’s Cuba Initiative, which will include a series of talks on topics relating to Cuba, a conference in April that will bring a number of Cuban studies scholars from around the region to Yale, and a class trip that will take 18 undergraduate students to Cuba during spring break.

“I’m particularly excited for the class trip, which I will be helping to lead for the third time this year,” says Juarez.

Juarez grew up in Minneapolis, Minnesota, in a musical family. His mother played piano and sang in church, and he had an uncle with “a beautiful, untrained tenor voice,” Juarez recalls.

“We’d sit around the piano singing songs while I was growing up,” he says. “Out in the world, if I ever said, ‘Let’s sing’ and someone responded by saying ‘I don’t sing,’ I’d be surprised. I thought everybody sang! There is still a real choral tradition in the Midwest.”

As a child, Juarez was a member of the Metropolitan Boys Choir of Minnesota, which gave him the opportunity to travel the country and abroad for performances in England in Wales.

Later, while studying at Bethel University in St. Paul, Minnesota, he joined the school’s choir, conducted first by Robert Berglund and later by Dennis Port. Both conductors encouraged Juarez in his singing, and Jan Hendrickson, a voice teacher there, suggested he audition for the Minnesota Opera Chorus. (His only previous opera experience was to sing with the Metropolitan Boys Choir for a Minnesota Orchestra’s performance of Verdi’s “Othello” and later, as a boy alto, to perform as one of the spirits in a school production of “The Magic Flute.”)

Juarez auditioned, and several weeks later was invited to sing for the Minnesota Opera Chorus’ production of Puccini’s “Turandot.”

“It was a fun way for me to get a start in opera,” says Juarez, who spent his remaining years in college and another two years after that performing in eight operas with the Minnesota Opera Chorus.

In college, Juarez majored in Spanish, but after graduating he continued to take private voice lessons and to sing as a soloist in the choir of a large Lutheran church in Minneapolis that was conducted by his college choir conductor Dennis Port. Another soloist at the church, soprano and former Miss America Dorothy Benham, with whom Juarez often sang, suggested that he contact her former teacher, Yale Opera program director Doris Yarick-Cross.

Singing on while pursuing a different career

When Juarez reached out to Yarick-Cross, he envisioned just having a conversation, but she simply told him to send along an audition tape. He did, and the day after he sent it by overnight mail, he heard back from her.

“She asked if I had applied to Yale and when I told her I hadn’t yet, she said I should apply ASAP,” recalls Juarez. “So I did.”

Despite that encouragement, Juarez says that it was a bit of challenge to be at the School of Music for a master’s degree program given that he had not majored in music. Nevertheless, he enjoyed his time at Yale learning such opera parts as Rodolfo in “La Bohème” (it’s still the opera he “learned best,” says Juarez), Don Jose in “La Tragédie de Carmen,” and many scenes from world-famous operas. He remembers with particular fondness the many exceptional young singers with whom he got to sing in rehearsal and on stage at Yale Opera. They were “talented singers and wonderful colleagues,” he says.

After graduation, life began taking a different turn. Juarez had been taking singing lessons from a NewYork-based voice teacher with whom he says he “built a reliable vocal technique,” but he had to give up these lessons when his first son, Danny, was born in 2007. His second son, Ricky, was born in 2010.

One of the most wonderful things is that a lot of the singers that I work with… are current students or alumni of the Yale School of Music.

After spending several years without singing, Juarez began performing in occasional concerts and began auditioning for opera roles in 2011. He took on his first role — as Monostatos — in the Connecticut Lyric Opera’s production of “The Magic Flute.” The opera company was co-founded in 2003 by Yale School of Music alumni Adrian Sylveen M.M. ’96, its conductor, and his wife, mezzo-soprano Monika Krajewska M.M. ’00.

“It was fun to be on stage again with singers,” says Juarez of the experience. “The beauty of this company is that it really does find amazing singers, and the orchestra is fantastic. It is an absolute gem.”

Beginning in 2016, he began performing in Opera Theater of Connecticut productions (conducted by Yale School of Music faculty member Kyle Swann) in principal roles. He also began to be featured as the tenor soloist in oratorio and concert performances, including Handel’s ‘Messiah,” J.S. Bach’s “Magnificat,” and Mozart’s “Requiem,” among others.

“One of the most wonderful things is that a lot of the singers that I work with on these productions are current students or alumni of the Yale School of Music,” says Juarez.

Although he no longer takes voice lessons, Juarez has been relying on his past training and his own “intuition” when preparing for the opera roles he sings today. “I feel my voice now responds when I need it to,” he says.

Keeping to a routine

Juarez serves as the music director of the Be Free Church in Branford, where he sings every Sunday, conducts the church choir, and where his wife, Cybil, is the pianist. She is also a voice and piano teacher at Neighborhood Music School.

He says he is grateful that most of his rehearsals for opera productions take place in the evenings, allowing him to focus daily on his Yale job.

“The thing that has been most instrumental in allowing me to pursue my singing career locally is that I have a supportive spouse, who covers for me as far as parenting goes. I couldn’t do it without that,” Juarez says. “And I try to not accept anything that takes me away from home or work.”

Most recently, Juarez has also encouraged his family members to take part in his musical productions by taking on small parts. His son Danny, now 11, sang as a shepherd boy in “Tosca” and also had minor roles in “Rigoletto” and “La Bohème.” Cybil served as the children’s chorus director for “Tosca,” and both Danny and Ricky were in the chorus for that production.

I probably wouldn’t accept the engagements I do if it weren’t for the caliber of the people I sing with.

Juarez is especially fond of opera singers from the past, among them the Meriden, Connecticut native Rosa Ponselle. His favorite opera is whatever he happens to be performing at the time, he says. He believes that many of his fellow singers in the local productions are talented enough to be heard in the most famous opera houses of the world, but instead are “singing in small theaters with me.”

“I probably wouldn’t accept the engagements I do if it weren’t for the caliber of the people I sing with,” Juarez adds. “That I get to the share the stage with some of them is awe-inspiring.”

The Yale staff member doesn’t foresee a time in his future where he might make a living in opera, but says he has “no regrets.”

“I feel blessed,” he says. “I have a day job that’s interesting and engaging and then I have this other music world. That I enjoy the admiration of my colleagues is a real joy.”

His next opera performance will take place in the spring, when he will have the principal tenor role playing Calaf in “Turandot” for the Connecticut Lyric Opera.

“Calaf sings ‘Nessun dorma,’ a big, iconic aria in the opera,” he says. “If you mess that up, you’ve messed up the whole opera. It’s a huge, challenging role, so that’s really exciting for me.”