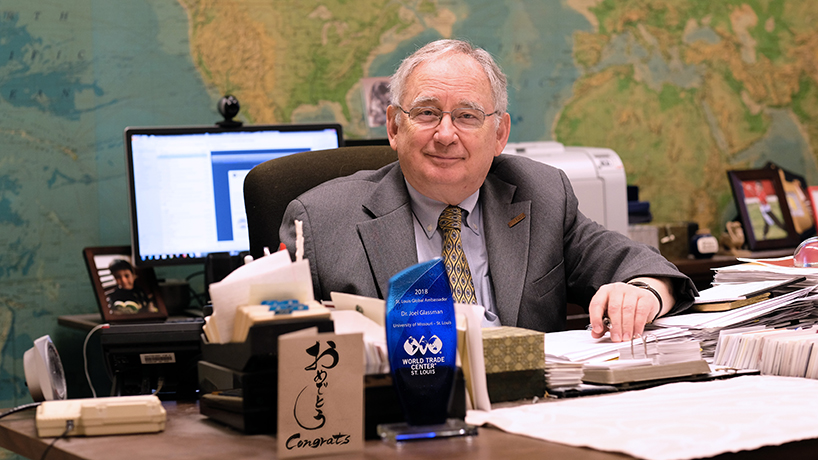 Joel Glassman will be retiring from his post at International Studies and Programs on Nov. 1. (Photo by August Jennewein)

On the eve of his retirement after 45 years at the University of Missouri–St. Louis, Joel Glassman received a curious phone call.

On the other end of the line was Tim Nowak, executive director of World Trade Center St. Louis, who, apropos of nothing, asked for Glassman’s biography.

“I said, ‘Sure, anytime, what do you need it for?’ So, that’s how I found out,” Glassman recalled.

The award acknowledges “a person or organization that has enhanced the image of St. Louis as a global center and whose efforts have resulted in the positive exposure of St. Louis to the international community” and was given out at the WTC’s annual Growing Global luncheon on Sept. 21. 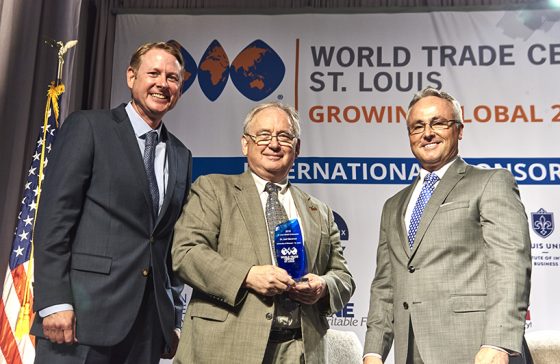 Internationalization has been Glassman’s raison d’être at UMSL and in St. Louis. He, however, will be the first to say that becoming an international studies director was not a long-held career ambition. It unfolded gradually as his logical path.

Glassman grew up in Woodside, New York, which is a neighborhood in Queens. He attended the City College of New York then earned a PhD in political science at the University of Michigan before coming to UMSL, straight out of graduate school, in 1973.

He spent his initial years teaching East Asian politics, primarily those of China and Japan, and in 1988 started helping out with the administration of international studies on behalf of its founder, Ed Fedder. When Fedder retired early due to illness, Glassman acted as director, then interim director, until then-Chancellor Blanche Touhill announced a search for a new director.

“By the time they decided to do the search, I was invested in doing it, and we also had a relatively new chancellor,” he said. “She had a very strong commitment to internationalization, which before that had been, I’m going to say, a relatively lower priority for UMSL. It was exciting to work for someone who was so eager to build the international profile of the campus, and I felt that I worked pretty well with her, so we accomplished a lot.” 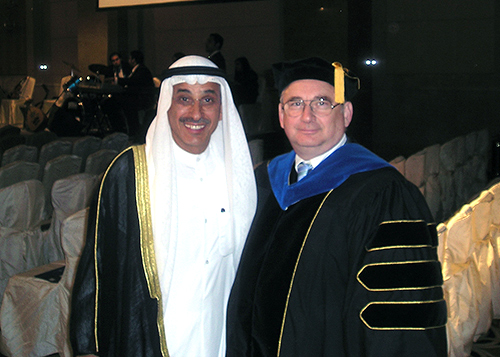 In 2007, Glassman was a graduation speaker at Gulf University for Science and Technology in Kuwait. He is pictured with Abdulrahman Al-Muhailan, then-president of GUST. (Photo courtesy of Joel Glassman)

At that time, international studies’ primary purpose was funding faculty research. That continued under Glassman’s tenure, and he allocated between $45,000 and $60,000 annually. In addition, he raised money for six endowed professorships with joint appointments in international studies.

He also developed linkages and partnerships with universities around the world and promoted study abroad to UMSL students. In recognition of many students’ needs, Glassman raised money and then established study abroad scholarship funds. He also began initiatives to grow the international student presence on campus.

“One of the changes that we implemented was to proactively go out and recruit international students so that by now, at any point in time, I would say there are 500 international students from about 70 to 80 different countries,” Glassman said. “That has had a big impact on changing the way the campus looks. We set our minds to saying UMSL students needed to learn and study in an environment that was much more diverse, that looked like the rest of the world.”

As UMSL has become increasingly global, Glassman’s mission grew to encompass the St. Louis community as well, and his work with the WTC blossomed from that mindset. In addition to community initiatives like the St. Louis Mosaic Project, an economic growth effort that aims to make St. Louis a national leader in attracting immigrants, Glassman helped develop the jointly sponsored Chancellor’s Certificate in International Trade.

“This certificate program provides practical training for company employees so that they can be more effective agents in the international trade arena, and we’ve been doing this for quite a few years now,” he said. “I’m pretty proud of what we’ve accomplished collaboratively. 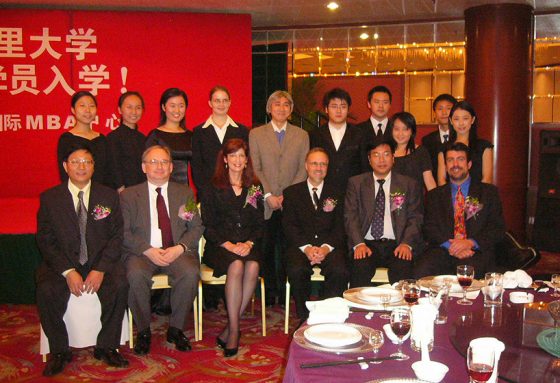 At Nanjing University in 2005, Chancellor Tom George,  Professor Barbara Harbach, and Glassman attended a banquet in celebration of the growing partnership between universities. (Photo courtesy of Joel Glassman)

The St. Louis Sister Cities Program, which supports and coordinates 16 relationships with countries ranging from Argentina to Russia, is planning a milestone celebration of the first U.S. and China sister-city pair.

“I’m still on the board, and we’re doing many projects in anticipation of the 40th anniversary, which will be in 2019,” Glassman said. “This 40th anniversary, in my mind, is a big deal for St. Louis, and actually one of the things I’m going to do as a retired person is invest more of my time in that relationship because I will have more time.”

In addition to his work with the Nanjing – St. Louis committee, Glassman hopes to continue working toward building St. Louis’ global importance by focusing on the many community organizations for which he volunteers. He also plans to spend more time with his grandchildren and to regularly stroll over from his Bel-Nor neighborhood to attend lectures at UMSL.

“I thought I would make a plan before I started to retire, but I found myself so engaged with doing the job that I didn’t have time to think about not doing the job,” Glassman said. “I’ve enjoyed being at UMSL because it was an opportunity to carry out change, and I hope that entrepreneurial spirit continues. Long before I had an administrative role, UMSL was still in a phase of becoming, and to me that’s more interesting than being in a role of trying to preserve something very good. I’d rather play a role in building something very good.”