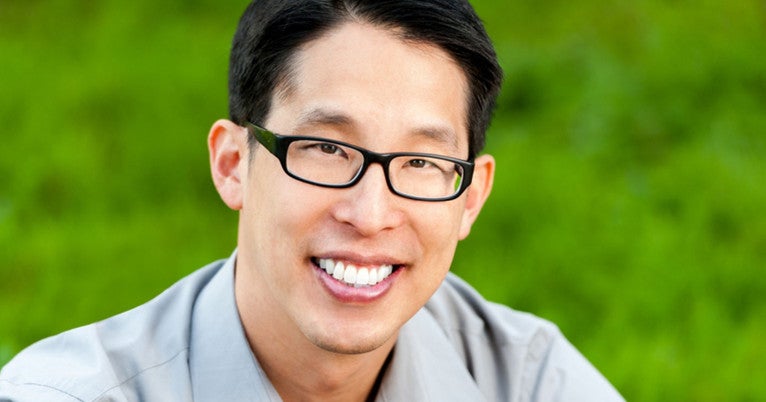 Award-winning graphic novelist, cartoonist, and educator Gene Luen Yang will visit the campus on Wednesday, Nov. 7 under the auspices of the Chubb Fellowship at Timothy Dwight College.

Yang will deliver the Chubb Fellowship Lecture titled “Power of Comics for Inclusivity and Equality” at 4:30 p.m. in the Robert L. McNeil Jr. Lecture Hall in the Yale University Art Gallery, 1111 Chapel St. The talk is free and open to the public. Doors will open at 3:30 p.m. The talk will also be livestreamed on Yale’s YouTube channel.

His next major solo work, “Boxers and Saints,” published in 2011, chronicles the story of the 1900 Boxer Rebellion in China from two different protagonists and perspectives — a Chinese boy who joins the rebellion and a Chinese girl raised by Christian missionaries. “Boxers and Saints” won the Los Angeles Times Book Prize in young adult literature, and was a finalist for the 2013 National Book Award.

In 2016, Yang won the prestigious MacArthur Fellows Award for “bringing diverse people and cultures to children’s and young adult literature and confirming comics’ place as an important creative and imaginative force within literature, art, and education.” Yang was appointed by the Library of Congress to serve as the fifth National Ambassador for Young People’s Literature from 2016 to 2017. During his term, Yang promoted the platform of “reading without walls” to break down barriers and work towards greater social inclusivity and diversity in children’s literature.

Yang has experimented with the superhero comic book genre to explore themes of race, inclusion, and social inequality. He published “The Shadow Hero” to great acclaim and wrote for the New Super-Man series by DC Comics and “Avatar: The Last Airbender” for Dark Horse Comics.

Yang has also published a series of graphic novels for young readers titled “Secret Coders” that combines computer coding and logic puzzles with a mystery. He is currently at work on his non-fiction graphic novel, “Dragon Hoops,” that chronicles the story of the highly diverse six-person squad of the boys’ basketball team at Bishop O’Dowd High School, where Yang had previously taught, and their 2015 run for the California state championship. Since 2012, Yang has taught in Hamline University’s M.F.A. program in Writing for Children and Young Adults.

The Chubb Fellowship was founded with a gift from Yale alumnus Hendon Chubb, and since 1949 has been one of Yale’s most prestigious honors conferred on visiting speakers. The Timothy Dwight College Head of College, currently Mary Lui, administers the fellowship, which is devoted to encouraging interest in public service. Chubb Fellows spend their time at Yale in close, informal contact with students and make an appearance open to the public. Former Chubb Fellows include Presidents George H.W. Bush, Ronald Reagan, Jimmy Carter, and Harry Truman; authors Wendell Berry and Toni Morrison; actor Shah Rukh Khan; world leader Ellen Johnson Sirleaf; journalist Nicholas Kristoff; and many other nationally and internationally prominent citizens and leaders.