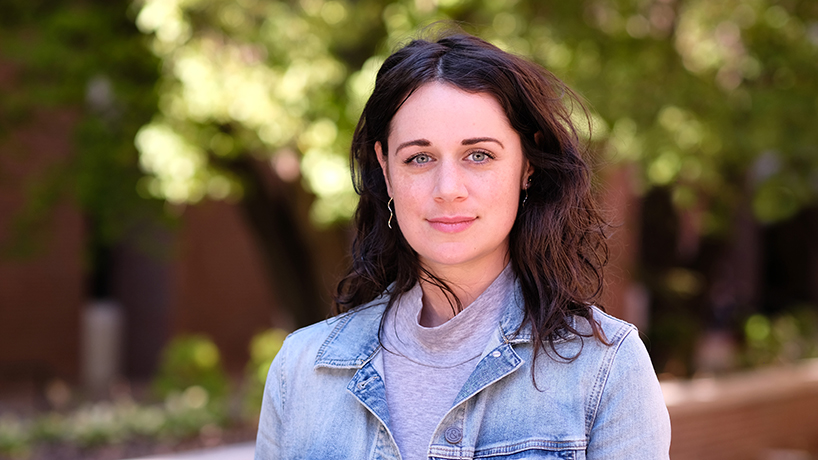 UMSL student Liz Deichmann plans to use her MPPA research skills to answer her own questions about the St. Louis arts nonprofit scene. (Photo by August Jennewein)

Naming just a few St. Louis arts organizations that enrich her life is next to impossible for Liz Deichmann.

She included the Luminary, where the University of Missouri–St. Louis MPPA student was concert manager; Flood Plain gallery; YourWords STL; UrbArts; Yeyo Arts Collective; FoodSpark; the Pulitzer Arts Foundation and Intersect Arts Center. Deichmann explained that all are small to midsize arts nonprofits with innovative services or resources that she views as beneficial to the St. Louis community, and then she paused midsentence.

“There’s one more that I have to say that’s great – Farfetched,” she said. “It’s hard not to keep naming places. There really just are some amazing things. I’m going to stop myself.”

This array of favorites displays the depth and history of Deichmann’s involvement in the local music and arts scenes. In 2012, Deichmann cofounded a nonprofit called Midwest Artist Project Services, which has a mission to “serve and empower individual artists, collectives and emerging arts organizations in the Midwest region” through fiscal sponsorship, education for arts administrators and others and consultations. This, in turn, sparked her interest in UMSL’s MPPA program.

“It really set me up to come back to school, and I became very interested in cultural policy,” Deichmann said. “I knew I wanted to stay in St. Louis because I feel strongly about effecting change in the city and region I’m in, and I’m from here. The region has some notable cultural policies in place, but there’s still so much room to grow. I think my practical experience through MAPS really inspired me to think about these growth opportunities.”

Her time in the MPPA program has led her to think not just about her nonprofit but more broadly about arts and cultural policy, and it has caused her to explore how funding gets distributed and the way policy gets made in this region.

Deichmann came to the arts through the music industry. A St. Louis native, she earned a BA in art history at Saint Louis University, where she booked shows for the now-defunct Billiken Club. That led to moving to Brooklyn post-graduation to pursue a music promotion career during one of the worst moments for the music industry in recent history: the 2008 Great Recession.

She stuck it out for a while but eventually found her way back to St. Louis where, while working in film production, she helped start the St. Louis Secret Sound Society, a collective that organized concerts by announcing the venue and price but not the musicians. That undertaking led to the St. Louis Arts Project, a multi-genre and multi-discipline collaborative that organized independent arts and music conferences at the Contemporary Art Museum and the Regional Arts Commission.

“That was definitely my segue into the arts nonprofit field,” Deichmann said, explaining how the experience exposed her to the resources, such as grant funding, that are available to other creative disciplines like visual and performing art.

Shortly afterward, Deichmann went through the Community Arts Training Institute, a RAC-funded program that teaches the skills of social change through arts. She was baffled to learn that, in St. Louis, there were very few funding opportunities available for individual artists and no local fiscal sponsors.

Fiscal sponsorship is the practice of a nonprofit extending its tax-exempt status to an external project, which allows it to obtain resources only available to nonprofits, such as grant funding or tax-deductible donations, and gets projects up and running with a simple memorandum of understanding.

“I have always been the operational person and the project manager, and a lot of my roles in those organizations was putting on the events and figuring out how we were going to pay for things,” Deichmann said. “I was becoming really interested in the sheer questions of how do you operate, how do you do things if you’re not a nonprofit, or even if you are, what resources are available to you.”

When she started to ask questions, her CAT teacher Roseann Weiss, former director of the Community & Public Arts Department at RAC, challenged Deichmann to do something about it. MAPS was Deichmann’s response. That was seven years ago, and today her nonprofit sponsors four projects located in the greater St. Louis region.

After taking statistics and economics classes at UMSL, Deichmann realized her true interests were in research and analysis. Anne Winkler, chair of the Department of Economics and professor of economics and public policy administration, encouraged her to pursue those when she might otherwise have been hesitant.

“Over the years, I have encountered quite a few MPPA students, especially women, who never considered doing anything quantitative,” Winkler said. “However, once exposed to how economics and statistics can be applied to answer policy questions of interest, they discover that they have a real aptitude and passion for this type of study. This perfectly describes Liz.”

While in Assistant Professor Adriano Udani’s class “Multi-Methods in Equity in Social Science Research,” Deichmann applied her quantitative analysis skills to examining the proportion of resources that goes toward each arts nonprofit in the St. Louis city and county area. Though a small number of national studies have been published, none existed examining St. Louis’ funding equity.

“I wanted to see, based on different characters, the proportion of funding that went to different groups,” Deichmann said. “I found that something like 95 percent of all funds go to the largest one third of all nonprofits in St. Louis, and discipline is significant. Cultural, folk and community-based arts nonprofits tend to receive way less money.”

In June, Deichmann presented her findings at The Arts in Society conference in Vancouver, Canada, and was granted one of 10 emerging scholars awards to attend. But that was not the only thing she did last summer. In addition, Deichmann interned with Americans for the Arts in Washington.

“I’m a real big nerd for arts research and cultural policy, and they’re one of the national leaders,” she said. “I was very excited because it really aligned with my own research interests. They’re essentially the advocacy group for the arts nationally, and I knew that I really wanted to get that experience.”

As a research intern, Deichmann was paired with another intern from Animating Democracy, an initiative under the Americans for the Arts’ umbrella. The two worked together to create candidate memos and economic impact reports for the midterm elections.

“They essentially combined a lot of the existing research to look at the economic impact of the arts nonprofit sector and the creative industries, which is a little more broad and includes things like filmmaking,” Deichmann said. “They included also public opinion poll data and any global data.”

She also assisted with grant program evaluation by setting up interviews, researching and doing analysis and report writing. Now, she is taking these experiences back to RAC, where she has been interning since August, to help perform an internal evaluation of the General Operating Support grant program.

On track to graduate in December, Deichmann hopes to continue her studies with a political science PhD. She would also like to build on her own research into the arts and culture sector and eventually do policy research as a consultant or professor.

“The more I learn about research traditions and methodology, the more that I realize that the arts and culture sector doesn’t really have a strong research tradition or quantitative methods,” Deichmann said. “I see a whole lot of opportunity to be able to do research with what I’m learning here. It gives me the tools to not only ask the questions, but now I have the power to hopefully be able to answer them.”