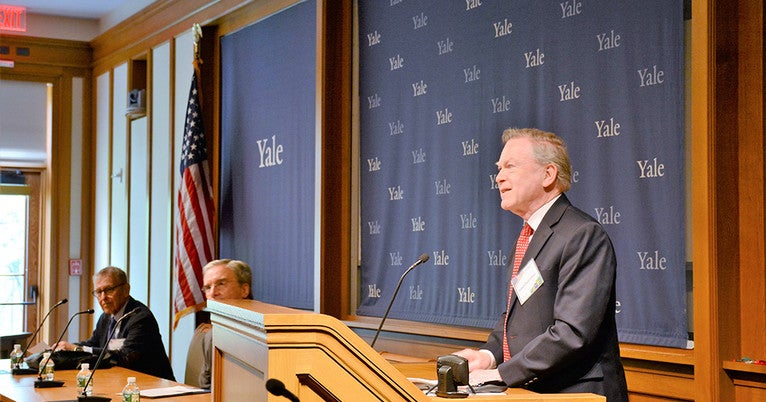 The Council on Latin American & Iberian Studies (CLAIS) at the Whitney and Betty MacMillan Center for International and Area Studies at Yale will join with the Brazilian Ministry of Education to co-host an interdisciplinary conference on the present status and future of Brazilian studies at U.S. universities.

The two-day event, “Brazilian Studies in the United States: The Road Ahead,” takes place on Nov. 30 and Dec. 1 at Henry R. Luce Hall, 34 Hillhouse Ave. Academic scholars, prominent administrators, and key representatives from the Brazilian Ministry of Education will be in attendance.

In addition to focusing on the potential for Brazilian studies, participants will discuss the United Nations 2030 Agenda, particularly the Sustainable Development Goal related to education: “Ensure inclusive and equitable quality education and promote lifelong learning opportunities for all.” The power and promotion of interchanges and network formation among students, faculty, and researchers will also be addressed.

The work of the selected presenters promises to provide models and incentives for future scholars interested in Brazil, thereby helping to revitalize Brazilian studies for the 21st century. For instance, art historian Edward Sullivan of New York University, organizer of the 2001 Guggenheim Museum show on Brazil, will discuss his work crafting the new exhibition on landscape architect Roberto Burle-Marx for the Bronx Botanical Gardens in New York.

“This is a very encouraging event on Brazilian studies to be hosted here at Yale. I am grateful to CLAIS and the MacMillan Center for managing and co-sponsoring this historic and groundbreaking event on academic relations between our two countries,” said David Jackson, director of undergraduate studies for Portuguese at Yale and one of the key organizers of the conference.

To prepare “The Road Ahead,” Jackson participated in two planning sessions earlier this year. The first took place in Brasília at the Ministry of Education in February, and the second took place in Rio de Janeiro in July. Among other things, the Ministry aims to strengthen international education at Brazilian institutions, a goal reflected in the agenda of Yale’s conference.

Yale professor and CLAIS director Claudia Valeggia, noted, “This event represents Part II of the inaugural conference Yale hosted on May 7 of this year. It allows us to further solidify ties with scholars and students who focus on Brazil, which is one of the programmatic goals of CLAIS for the next few years.”

Established in 1962, CLAIS serves as the central hub for intellectual exchange and collaborations in Latin America, Spain, and Portugal. The council works to strengthen exchange and innovation through a broad array of courses, cultural events, scholarly lectures, international conferences, and academic research. In addition to facilitating the CLAIS graduate and professional school affiliates network, CLAIS also off­ers an undergraduate major in Latin American studies and a Graduate Certificate of Concentration in Latin American and Iberian studies for graduate and professional students at Yale.

CLAIS is working with the Beinecke Rare Book and Manuscript Library to display key Brazilian collections prior to the conference.

More information on the conference, including the latest program and speakers, can be found at the MacMillan Center website.