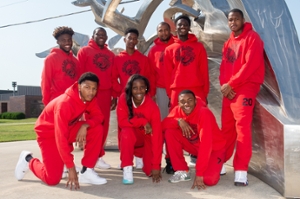 It is important to have a student-athlete approach, according to Roundtree, who formed the CHS track team in 2015. “Athletics adds discipline and responsibility to students’ education,” said the track coach. “Track was the easiest sport to start at the Charter High School, because it did not require us to add any facilities.” CHS is located at the East St. Louis Higher Education Campus, which currently does not have a gymnasium or track.

“We practice behind the Charter High School and at the track at Lincoln Middle School in East St. Louis,” explained Roundtree.

“The Charter High School track team is in its third year, and we now have both a boys and a girls track team,” said Roundtree. Six CHS female students make up the girls team, and approximately 20 males are on the boys team.

Paraham said his years working with Roundtree and the CHS track team have made him a better student and person.

“By being on the track team, I’ve learned you have to focus,” he said. “Track has also helped me build character. I used to be a loner. I have learned how to communicate better with people.”