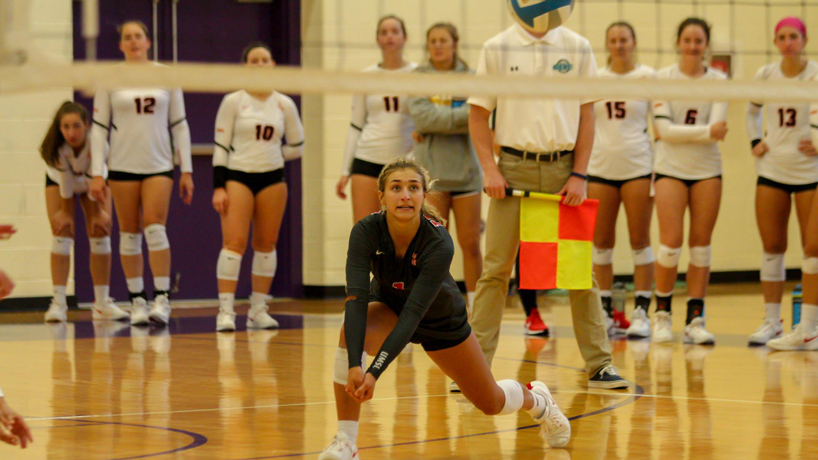 Freshman libero Megan Woll averaged 6.62 digs per set over three matches as the UMSL volleyball team recorded wins over Indianapolis and No. 23 Rockhurst last week before falling to William Jewell.

Volleyball
UMSL went 2-1 last week, extending its win streak to six matches with a 3-1 road win at Indianapolis on Tuesday and a 3-1 home win over No. 23 Rockhurst on Friday. The Tritons then lost 3-2 to William Jewell on Saturday. Junior Selena Nolte averaged 3.77 kills per set and became the eighth player in program history to record her 1,000th career kill. Freshman Megan Woll averaged 6.62 digs per set over the three matches. UMSL (13-14, 6-10 Great Lakes Valley Conference) concludes the season with two matches this week. The Tritons host Illinois Springfield on Tuesday and travel across town to Maryville on Saturday.

Men’s Soccer
The Tritons wrapped up the 2018 season Wednesday with a 1-0 loss at McKendree. UMSL finished with a 6-10 record, including a 5-8 mark in the GLVC.

Men’s and Women’s Swimming
The Tritons debuted their new scoreboard Friday, hosting Maryville and Lindenwood-Belleville in a triangular. Both the men’s and women’s teams won their respective team titles, while each team won eight events. On the women’s side, junior Aga Blocka earned three victories, including individual ones in the 100- and 200-yard freestyle. On the men’s side, junior Gabo Jimenez also claimed three victories, helping the 200-yard medley and freestyle relays to wins and taking the 100-yard freestyle. UMSL returns to the pool November 16-17 at the Lindenwood Invite.