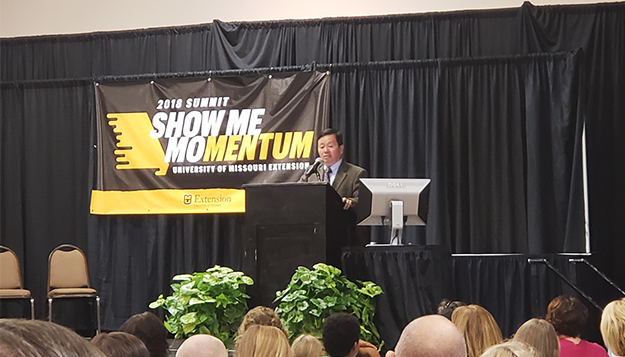 In his remarks at the 2018 Extension summit, President Mun Choi emphasized the importance of continuing the collaborative partnership between the UM System and Extension to benefit Missouri.

From Oct. 23-25, the University of Missouri Extension held their annual summit as an opportunity for employees from across the state to catch up, network, receive training and hear Extension’s vision for the next year. Last year’s summit focused on making plans to increase meaningful engagement across Missouri. This year, the theme “Show-Me MO-Mentum!” was about moving from the planning stage to action. One major part of this action has been to extend Extension’s reach from MU to the other UM System universities. In recognition of this effort, President Mun Choi thanked MU Vice Chancellor for Extension and Engagement and UM System Chief Engagement Officer Marshall Stewart for “leading the efforts to integrate the work of our universities and bring the benefits to Missourians.”
In his welcome address, Stewart stated that Extension is committed to the ideas of excellence, partnership and collaboration. Extension has set goals to significantly grow Missouri’s economy and to double their economic impact in the next decade. Stewart emphasized the need to embrace the University of Missouri as the defining aspect of Extension’s identity. “We are looking forward to being one aligned university,” he noted.
Stewart also spoke about meaningfully engaging the community across the state, stressing that “Engagement doesn’t happen by accident.” These sentiments echoed President Choi’s State of the University address this September, where he announced a $10 million investment towards the Missouri Compact for Engagement and Outreach. Both Stewart and Choi reaffirmed the importance of a collaborative partnership between the UM System and Extension in the future.
Summit participants also attended the inaugural address of the Novak Leadership Institute Speaker Series, given by David Novak, a Mizzou alumnus and the retired CEO and co-founder of Yum! Brands. Novak’s address on the importance of recognition in successful leadership was delivered in Jesse Hall and the event was open to the greater campus community. After the address, Extension employees toured the Mizzou campus, including the Engineering Lab, the Bond Life Sciences Center, MizzouRec, the MU Observatory, the School of Social Work, the MU Research Reactor and other campus locations. These visits, along with Stewart’s clear emphasis on more fully aligning Extension and the University of Missouri, signal that the partnership between these institutions will be much closer in the years ahead.