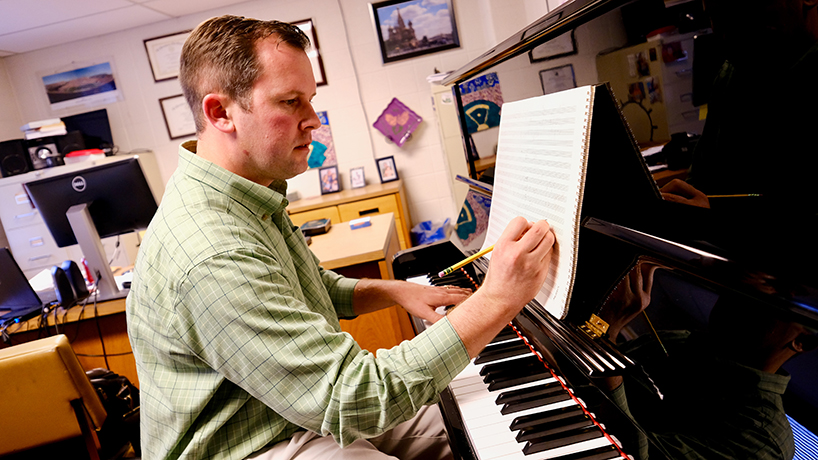 “She said, ‘We’d really like to have somebody from St. Louis write a piece for us as part of this sister-city connection,’” Cairns said. “I thought it sounded like a really special opportunity, so I said that I’d love to do it.”

“I guess I was the hamburger,” Cairns joked. “I think it was really well accepted. I don’t think my piece is terribly dissonant or unconventional, but it has different harmonies than just major and minor chords, so it’s not the same kind of music you would expect if you were going to hear a piece by Beethoven or Mozart.”

At the festival, he spoke at a forum about the relationship between classical music and popular music and culture, playing some of 2018 Pulitzer Prize winner Kendrick Lamar’s music for the primarily German-speaking audience. Cairns also attended rehearsal and gave pre-debut opening remarks using his “high-school German.”

“Blumenlieder” came together over three months this past summer and includes parts for cello, flute, violin and voice. To strengthen the St. Louis and Stuttgart connection, Cairns decided to use a Missouri poet for his vocals and searched for work from before 1923 to avoid copyright issues. St. Louis-born lyric poet Sara Teasdale’s dark themes appealed to Cairns, and he worked with three of her poems, “Let it be Forgotten,” “Blue Squills” and “Tonight,” which are unified through plant and flower imagery. 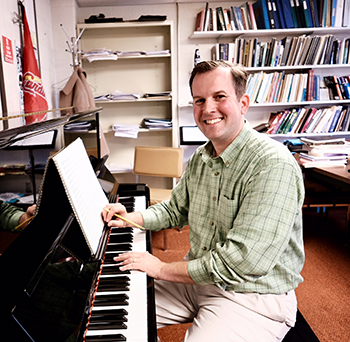 He called his work “Flower Songs” and then translated that into German to suit the setting. Cairns worked collaboratively with the performers, and Kerrigan sent Cairns CDs of her singing so that he could develop a sense of her vocal style.

“Some singers have a very light kind of voice, and others have a really heavy operatic voice,” Cairns said. “Aylish is somewhere kind of in the middle, and I had to make sure it would fit with her. I like to send sketches and drafts and get the players’ feedback because, ultimately, they are going to be the ones to present the piece to the audience, so I want to make sure they feel comfortable with it. As comfortable with it as I do.”

“I try to look for ways I can reflect that musically, whether it’s having a single chord that’s associated with a word or an idea,” Cairns said. “Sometimes a phrase or different sentences suggest a rhythm to them or a certain combination of notes. It’s hard for me to generalize. I think, for me, it’s a little different for every piece.”

That difference is partially dictated by the confines of Cairns’ schedule. During the summer, he has wide stretches of readily available time. During the school year, he is left squeezing in 20 minutes here and there. Plus, at UMSL, Cairns teaches music theory rather than composition and views his research on 1950s and 1960s modernist music in the former Soviet Union as his primary purpose.

Composing, however, has become an increasingly large portion of Cairns’ life. The UMSL Wind Ensemble debuted his “Refracted Moonlight” in 2016, and in 2017 his choral work “The Land of Nod” won the Missouri Composers Project competition and debuted at the MOCOP’s concert. With “Blumenlieder,” Cairns seems to have taken the next step in his composing career.

“My compositional work is something I that enjoy very much and find very fulfilling,” Cairns said. “Any opportunity that I have to work with new musicians and to explore new combinations of instruments and voices, I view as a really good opportunity for artistic growth. It does take a good proportion of my creative energy. I’m really fortunate that the music department and the College of Arts and Sciences is supportive of me doing these kinds of things. It really is a great situation to be able to do that.”