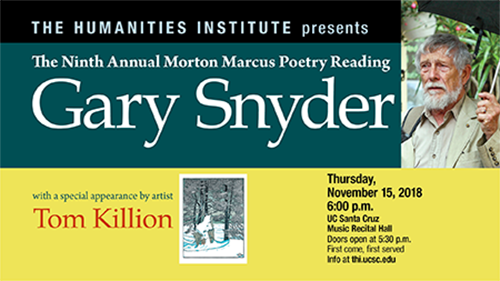 Snyder began his career in the 1950s as a notable member of the Beat Generation, but then moved on to explore a wide array of social and spiritual topics in poetry and prose.

Often described as the “poet laureate of Deep Ecology,” Snyder has become a spokesman for the preservation of the natural world and the cultures that seek to protect it.

In 1955, he famously read his poem “Berry Feast” at San Francisco’s Six Gallery reading, alongside fellow Beat poet Allen Ginsberg and in front of his friends, Jack Kerouac and Lawrence Ferlinghetti.

The following year, Snyder moved to Japan to study Zen Buddhism and later traveled extensively throughout Asia. His poetry is influenced by Japanese haiku and Chinese verse, as well as the study of anthropology and oral traditions.

Snyder is the author of nearly two dozen books of poetry and prose. In 1975, his collection Turtle Island was awarded the Pulitzer Prize for Poetry.

He received the American Book Award in 1984 for Axe Handles, and his 1992 collection, No Nature, was named a National Book Award finalist. And in 2012, Snyder received the Wallace Stevens Award for lifetime achievement by the Academy of American Poets.

It was created to continue Marcus’s tradition of bringing acclaimed poets to Santa Cruz County, to acknowledge the significant role poetry has played in the community’s history, and to help preserve poetry’s influence in the county’s culture.

The event will also include a special appearance by UC Santa Cruz alumnus Tom Killion, who is internationally known for his vividly colored woodcut prints of the California landscape.

Killion has collaborated on several books with Snyder, including California’s Wild Edge, Tamalpais Walking, and The High Sierra of California.

Admission is free, and the public is invited. A book signing and reception will follow the reading.

The festivities begin at 6 p.m.