V-Day concert to celebrate centennials of both The Armistice and Yale Bands - EduBlog.News 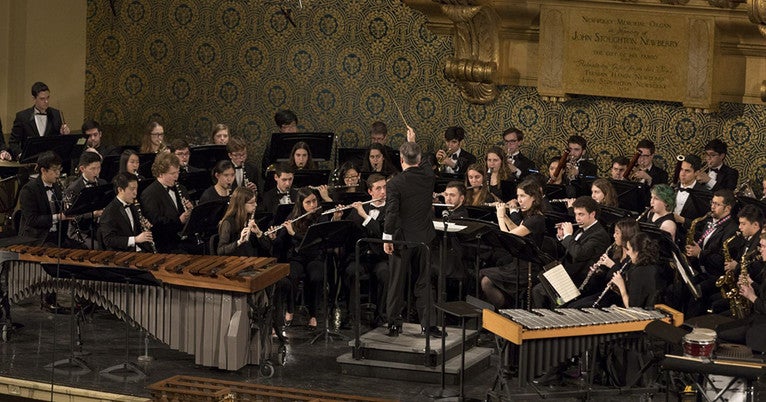 The Yale Concert Band will celebrate two centennials at its Veterans Day concert — the signing of The Armistice to end World War I and the 100th anniversary of the founding of Yale University Bands.

To mark its founding in November 1918, the Yale Band — under the direction of Thomas C. Duffy, music director — will perform “Three Dance Episodes from ‘On the Town’” by Leonard Bernstein (who was born in 1918). Originally a ballet, “On the Town” is a musical about three sailors exploring New York on a 24-hour leave. The work being performed reflects the varied, emotional dance styles of the ballet.

The band will also mark its 100th year with a performance of “Twist” by Jodie Blackshaw, a piece inspired by the shape, spirit, and history of Australia’s waterway, the Murray River. The work is divided into six movements subtitled “Survival,” “Reflection,” “Discovery,” “Obsession,” “Carnevale” and “Ascension.”

In addition, the Yale Concert Band will present a collection of patriotic songs and marches to commemorate the signing of The Armistice of Nov. 11, 1918. These will include “Over There” (George M. Cohan), “Yankee Division AEF March” (Fred W. Clement), “America, the Beautiful” (music by Samuel Ward, lyrics by Katherine Lee Bates); and “Down the Field” (Stanleigh P. Friedman, Yale Class of 1905; arrangement by Erik W.G. Leidzén).

The Yale University Bands comprise three groups: the Yale Concert Band, an ensemble of 45-60 wind, brass, and percussion players that perform repertoire ranging from wind band classics to premieres, commissions, and the newest wind band literature; the Yale Jazz Ensemble, a 17-piece big band that performs a wide variety of music, from pieces from Yale’s Benny Goodman archive to the newest, most progressive jazz compositions; and the Yale Precision Marching Band, a scatter-style marching band that performs at Yale football, hockey, basketball, and other  games throughout the year.

In honor of its 100th season, Yale Bands is highlighting a different photo or document from its archives each week throughout the 2018-2019 season. These can be found at the Centennial Moments site.