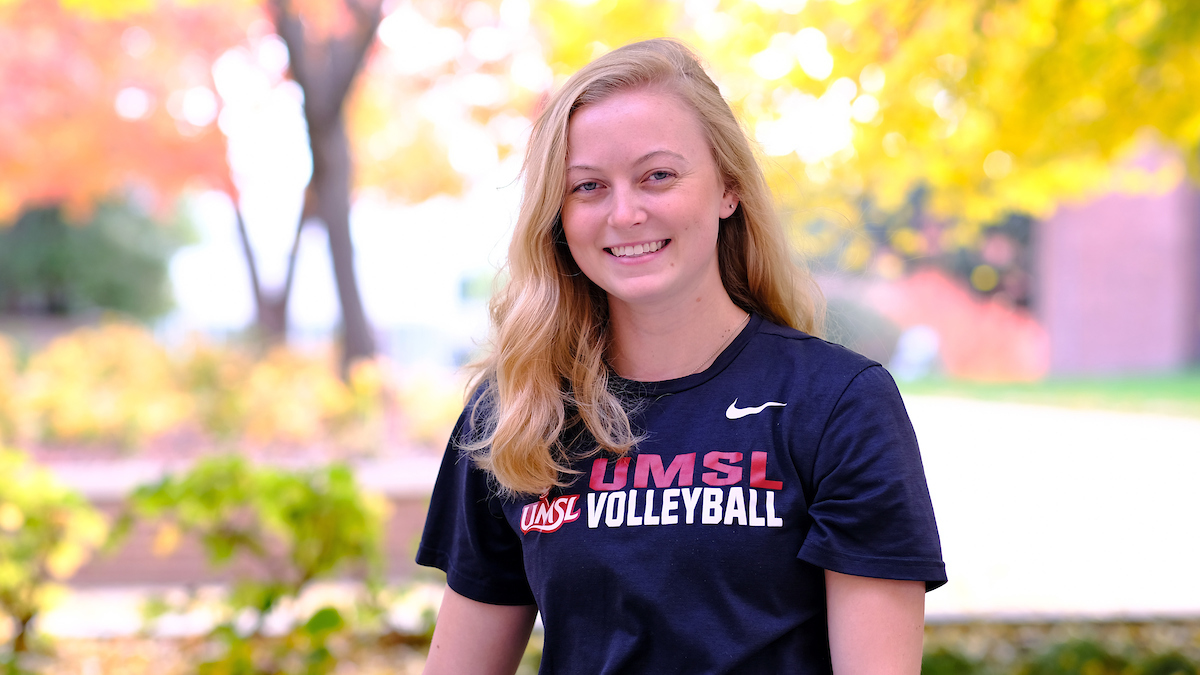 Grace Goedde was starting to get a little anxious.

It’d been months since she’d first started watching friends and volleyball teammates at East Central College give verbal commitments to continue their athletic and academic careers at schools around Missouri and the wider Midwest.

But as her final junior college season wrapped up last fall, Goedde still didn’t have any idea where her next college home would be.

“I was just kind of like, ‘I don’t know. Nobody has my major,’” the University of Missouri–St. Louis junior recalled recently. “I kind of was freaking out a little bit.”

Goedde already was certain of her intended career path.

Her statistics teacher at Parkway West High School – recognizing Goedde’s aptitude at math and her affinity for analyzing statistics – suggested several years earlier that she look into becoming an actuary, measuring risk and uncertainty and their potential financial cost.

He’d even introduced her to a friend in the field so she could job shadow and get a sense of what the work would be like.

Goedde decided pretty quickly it would be a good fit, especially when she learned that some actuaries work a consultants and travel and meet face to face with clients.

It’s been seen as a small but growing profession for several years as the insurance industry expands. The Bureau of Labor Statistics estimates that the number of actuaries employed will increase by 22 percent over its 2016 totals by 2026. In May 2017, the median annual wage for actuaries was $101,560.

But there still aren’t that many universities in the country offering actuarial science degree programs, and there were far fewer that would have allowed Goedde to continue playing volleyball and remain near her home and family.

Luckily for Goedde, UMSL was able to check all three boxes by last spring when its new actuarial science degree program won final approval from the Coordinating Board of Higher Education.

This semester UMSL became one of only two institutions in the St. Louis region to offer actuarial science as a major.

Goedde, a defensive specialist on the volleyball court, already liked what she’d learned about coach Ryan Young’s program as she reached out to various schools while exploring opportunities to continue her playing career. She’d visited UMSL and clicked with the players she’d met here.

“The fact that they had the actual degree now, that’s what made my official decision,” Goedde said recently as she chatted between classes at a table in the Fireside Lounge in the Millennium Student Center.

Goedde, now more than halfway through her first semester at UMSL, so far is one of seven students who’ve declared majors in actuarial science.

“We were only expecting maybe three students the first year,” said Teaching Professor Michael Allison, who’s had a role in launching the program. “We hadn’t marketed it at all. It just got final approval in the spring.”

UMSL had already offered a certificate in actuarial studies, signifying that students had taken some of the courses needed to enter the field. But at most two or three people would graduate with it in a given year.

Allison acknowledges there could have been others who took the requisite courses to prepare to become actuaries, but they never bothered to declare the certificate because doing so didn’t carry much weight on their resumes.

“To be a fully certified actuarialist, there are 12 check-boxes that you have to complete, and some of those are courses to take,” Allison said. “Those are called VEEs – or Validation by Educational Experience. Then you have to take a series of exams.”

Allison and his colleagues spoke with alumni in the field when devising the curriculum for the program, and they intended it to help prepare students to begin passing the required exams while simultaneously providing them the breadth of knowledge needed to be successful in their careers.

There are classes from each among the 62 hours of coursework required to earn the degree.

All those requirements don’t leave a lot of flexibility in the schedule, especially for a transfer student such as Goedde.

She got most of her prerequisites out of the way at East Central College and has jumped right into a heavy load of math, statistics and economics courses this semester while redshirting on the volleyball team.

“So far it’s been really smooth,” Goedde said. “I think that East Central College did a lot for me because it’s known for engineering and mathematics. I definitely think I came in very well prepared.

“I like all my UMSL professors a lot, and they’ve all been really helpful, so that’s definitely been really nice too.”

Goedde is expecting to need 2½ years to complete her degree, so she will compete for two more seasons on the volleyball court before graduation. By then, she hopes to have passed at least two of the required actuarial exams, setting her on course toward her intended future.

Allison is confident she won’t be the last.

“It’s not for everybody,” he said. “But if you’re someone who likes math, who enjoys statistics, and you’re saying, ‘What can I do with this?’ This is something you can. This program is an affordable choice for people in the area. It’s interdisciplinary in nature, so it’s not a pure math degree, and those who successfully complete the program and the exams have set themselves up for a pretty lucrative career.”