Yale researchers have developed a procedure that can replicate surface structures at the atomic scale – a breakthrough that could lead to better catalysts, improved data storage, and other novel applications. It could also aid in unlocking some long-standing mysteries about the nature of the glassy-liquid state of certain materials. 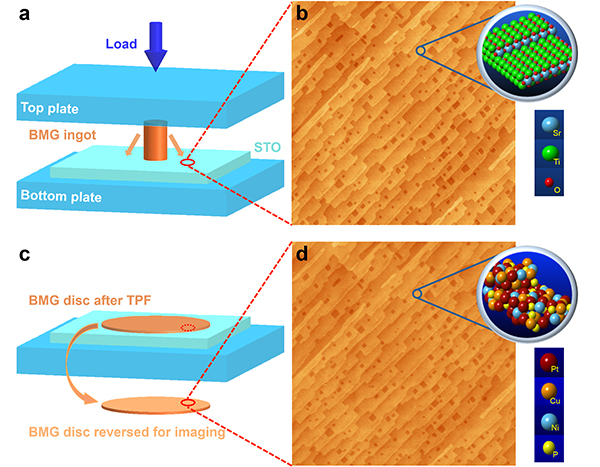 Led by Udo Schwarz, professor and chair of mechanical engineering & materials science, the research team demonstrated the ability to reliably and repeatedly replicate the terraced surface structure of strontium titanate (SrTiO3) single crystals, which serve as a mold, by embossing it into a metallic glass. In doing so, they were able to recreate all the details of the mold’s surface, right down to minute atomic-scale features, such as surface steps, kinks, and depressions featuring dimensions of only one unit cell of the original SrTiO3 crystal. The results are published today in Communications Physics, a Nature journal.

The process involves heating a metallic glass alloy predominantly containing platinum and then compressing it so that it flows into the mold. It’s similar to routine molding techniques used with polymer-based plastics to make things such as toys and casings, but on a much smaller scale. The work builds on previous research led by co-author Jan Schroers, professor of mechanical engineering & materials science, an expert in metallic glass alloys that can be produced in bulk quantities.

Key to the breakthrough was the choice of strontium titanate for the mold’s material.

“It took us a couple of years to figure out what type of mold is well-suited to this,” Schwarz said. Other materials, such as sodium chloride and graphite would stick together or transfer material to the object it was replicating. Strontium titanate, a brittle oxide-based crystal, has the perfect properties for the project.

“When you cool the crystal/glass stack down after the imprinting, it falls apart right along its interface and you have a 100% accurate copy of your mold’s surface structure,” Schwarz said. “Every last detail is exactly the same. For example, there are often small unit-cell deep depressions on the crystal’s surface and they replicate perfectly. The resulting surface of the metallic glass then looks like a reflecting crystal with all the usual features, such as atomically flat terraces, even though it’s a glass.”

The other critical component is the choice to form the replica from bulk metallic glass, a material with the strength of metal, but with the pliability of plastics when heated above its glass transition temperature. Schwarz said polymer-based plastics have worked “relatively well” for similar projects, but because their atoms move together in chains, there’s a limit to how much detail can be achieved. “In a metallic glass, each atom moves on its own. That’s why you can replicate anything with such precision.”

There are numerous potential applications for the technology, such as surface functionalization through atomically precise surface patterning. “With this, you could create just the right surface for maximum adhesion, or perhaps for minimal adhesion,” Schwarz said.

By maximizing the surface area of metals to its theoretical limit, it also opens a wide range of potential breakthroughs in the fields of sensors, catalysts, and batteries. It could also shed some light about the mysterious structure of metallic glass. Schwarz notes that so far, no one has been able to directly visualize the atomic structure of a three-dimensional glass – this includes both metallic glass and the conventional kind, such as those used in windows. In 2005, Science Magazine included the question “What is the nature of the glassy state?” in its list of “100 fundamental questions we don’t know.” Little progress has been achieved since, but being able to replicate at this level of detail could go a long way to better understand these materials.