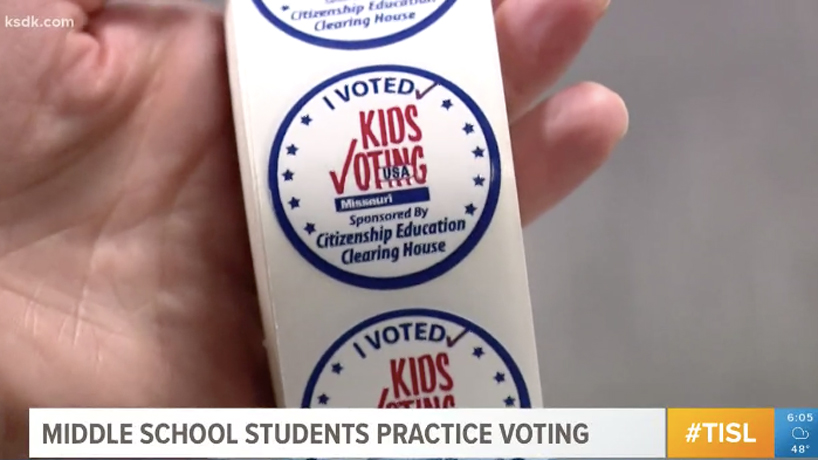 A youth voting program sponsored by the Citizenship Education Clearing House at the University of Missouri–St. Louis was featured on KSDK Channel 5 on Monday, the day before this year’s much-anticipated midterm elections.

Students were encouraged to research the issues and candidates and hold civil debates in class. They went to voting stations at their schools, showed their voter ID cards, signed in and submitted digital ballots.

“It’s really surprising how easy it is for us to vote and that we’re learning how to do it this early,” Hixson student Bailey Allen told KSDK, “which I think is really good because it’ll give us experience and know that our vote matters. When we’re older, hopefully, this generation will know that they need to vote.”

Webster Groves is one of 18 St. Louis area school districts – plus one private school – that is taking part in Kids Voting Missouri this year. The program, run through UMSL’s College of Education, started with the 1996 presidential elections with just one school district: Ritenour. That inaugural year, 6,600 K-12 Ritenour students had an opportunity to vote, with 47 percent casting a ballot.

Since then, more than 985,000 student votes have been cast through Kids Voting Missouri.

“Schools have been loyal to the program,” said Sandy Diamond, a long-time civic educator who has been leading the program for UMSL since 1999. “The success mainly depends on when you think about voting becoming a habit. It’s like picking up an instrument: You might start out with just a few songs, but you progress and get more and more involved.”

Students from 18 St. Louis-area school districts and one private school are making their voices heard in this year’s midterm elections through the Kids Voting Missouri program. Since 1996, more than 985,000 students have cast ballots through the program. (Photo courtesy of Sandy Diamond)

Participating school districts determined their own voting windows between Oct. 15 and Nov. 6. Diamond said she made specialized ballots for different grade levels and districts, and the voting push is part of an educational curriculum centered around making students more involved citizens.

High schoolers, for example, can vote on items such as U.S. Senate and Missouri Senate and House of Representatives races, State Auditor and ballot initiatives. Kindergartners through third graders can vote on issues such as their favorite St. Louis landmark, favorite past U.S. president and whether they think they should be allowed to set their own bedtime.

In the Parkway School District, which wrapped up voting Friday, the bedtime initiative went down in a landslide, 56 percent to 44 percent.

“We tell the students to be respectful of other people’s opinions, even if they’re different from yours,” Diamond said. “We teach them to say, ‘I understand what you’re saying, but I respectfully disagree.’ No arguments, no insults, no fistfights. The more you coach them to say it, the more they do.”

From 1996-2016, 66 percent of K-12 students in participating districts voted during presidential election years and 52 percent voted during midterm years. This year, with Parkway’s tallies already in, 90 percent of the 17,949 students cast a ballot.

“There’s a trickle-up effect with this program,” Diamond said. “The kids are engaged, and they go home and get mom and dad engaged. They talk about the issues over the dinner table or in the car. It starts a dialogue, a conversation.”

Participating students get to learn their voting results after the close of the polls Tuesday.

“It’s helped us a lot to realize our opinion matters and that we have a voice,” Hixson student Ozee McCollum told KSDK.