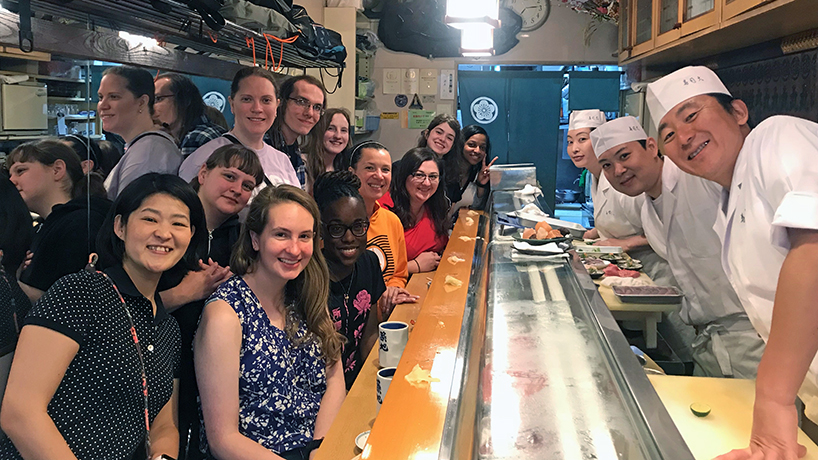 A group of study abroad students from the University of Missouri–St. Louis met the chef at a sushi restaurant in the Tsukiji district in Tokyo last summer on the Japan Study Tour. Seated at the counter are, from left: Assistant Professor Hiroko Yoshii, Harper Wieldt, Danielle Toney, Lana Aleksandrova, Fatima Omerovic, Molly Motes and Erikah Taylor-Allen. Standing in the back are, from left: Melinda Yarber, Emily Mixson, Kevin Flood and Brittany Henry. (Photo courtesy of Hiroko Yoshii)

Drake Anderson spent most of his nights in Spain getting lost – on purpose.

The University of Missouri–St. Louis senior was in Spain last summer on a two-week, study abroad trip led by Assistant Professor of Psychology Bettina Casad and Curators’ Professor of Comparative Politics and Gender Policies Joyce Mushaben. He took pleasure wandering the streets, eager to see where he might end up and what he might stumble upon. Thanks to the logic of city planning, he always found his way back.

“In the United States, I’ve always lived in the suburbs, so I don’t have a lot of experience being in cities and exploring,” Anderson said. “I had the realization that cities are all kind of built the same way. It’s really valuable to go and see that and experience the world more than your own backyard.”

The previous summer, Anderson had gone on a trip to Italy with Casad, but it was not until he was walking around Madrid that the similarities among most cities struck him. The unexpected bit of insight was one of the biggest takeaways Anderson brought back from his study abroad experience, but it certainly wasn’t the only thing he learned. 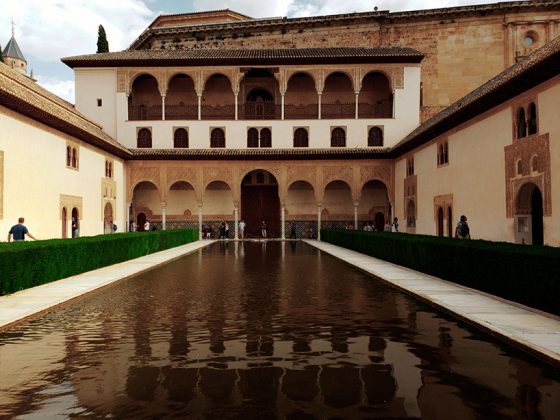 Drake Anderson snapped this shot in Granada at the Alhambra, one of the last Muslim held fortresses in Spain. (Photo by Drake Anderson)

The last are also known as short-term because the trips run from two to six weeks and take place over the summer or winter intersession. There are approximately 25 such programs with most occurring every other year. About 200 students study abroad every year, which comes out to about 2 percent of UMSL’s full-time, degree-seeking population.

“Given the large commuter demographic, the large Pell Grant demographic and that almost all of our students work full time or nearly full time, I think that’s not bad,” said Nathan Daugherty, senior study abroad and international exchange coordinator in International Studies and Programs. “We’re not happy with those numbers in the sense that we want to make them better.”

In his quest to recruit more students and faculty leaders, Daugherty finds himself myth-busting obstacles that he says are “more in the mind than reality.” The top myth concerns cost.

“Students often think we make money, but we don’t,” he said. “I run everything at exactly zero, but if we have more students, I can divide expenses by more people.”

On UMSL’s study-abroad portal, the Triton Globetrotter, Daugherty breaks down costs for every program and stresses that students can find airfare deals. Location determines cost, and there are some trips, such as the Lithuania exchange, that are less expensive than a semester at UMSL’s campus. 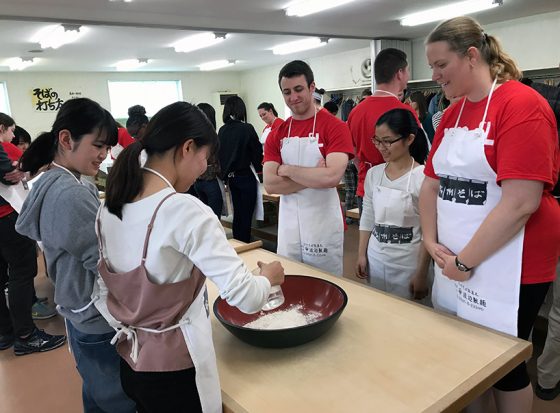 UMSL students made soba, a traditional Japanese noodle made out of buckwheat. From left, in red: Cameron Jensen and Emily Mixson. (Photo courtesy of Hiroko Yoshii)

Students can use their financial aid, and there are scholarship options internally from ISP and select departments as well as external options such as Rotary International.

Other commonly cited obstacles include the challenge finding courses that work for students’ degrees and graduating late because of study abroad.

“Nursing majors always tell me, ‘Oh, I can’t study abroad – I’m a nursing major,’” Daugherty said. “Well, that’s not true. Engineers, same thing. ‘It won’t go for my degree.’ Well, that’s not true. A lot of our students get classes abroad that they can’t get here. If anything, it helps you go faster, especially for the students that take the faculty-led programs. They earn credits in the summer when they may not have taken any classes at all.”

The faculty-led programs include a plethora of options, such as designing posters in Amsterdam, Netherlands, learning about international business in the United Arab Emirates or touring China.

Or they can research attitudes toward immigrants across Europe like Anderson did on Casad’s trips. In Spain, he was in a group of six that learned about the history of the Muslim empire in Spain, current gender issues and domestic violence. They had the chance to witness attitudes toward immigration firsthand when Spain accepted a boat of stranded immigrants from Libya.

While in Barcelona, Spain, the travelers met with students from the Goethe-Institut, a German cultural-relations center, to meet and speak with the German students interning there. Next May, Casad heads to the United Kingdom for part two of a Brexit study just as the UK formally separates from the European Union.

“Getting the students involved in the research strengthens the academic component of the program, and then, depending on the students’ level of involvement, they can present at conferences, they can get publications,” Casad explained. “A couple of my students have gotten their own grants. It’s nice that students can get involved at a high level.” 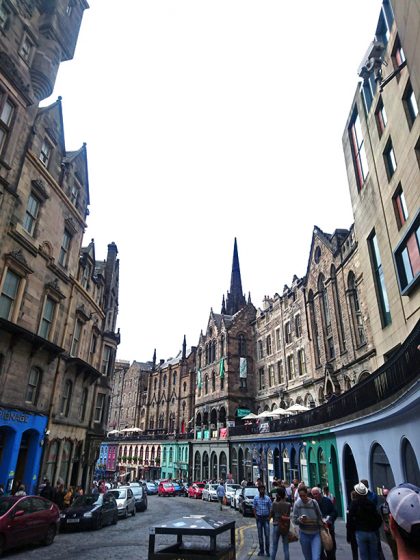 Anderson will be attending the UK trip, and his collective study abroad experience has helped shape his ambitions.

“I want to be a professor and do research,” Anderson said. “If I would be able to do study abroad trips, that would be cool or even just travel on my own, but in some way I’m sure I’ll be traveling for a long time.”

The biannual trip, which offers culture, business or non-credit tracks, is UMSL’s largest, with 24 attendees. The travelers spent nine days in Tokyo and then moved west for the remaining five. They visited shrines, attended an expat panel and visited businesses and universities to talk and exchange ideas with their peers. They also made traditional buckwheat noodles known as soba and visited Nagano’s Jigokudani Monkey Park, where macaque monkeys bathe in the area’s hot springs.

“I got interested in the program because I’ve never been abroad before, and I really wanted to go to Japan since that’s a good way to get immersed in the language,” Motes said. “I was scared to just jump right in and go for a semester or whole year since I had no clue what I was doing.”

The students dubbed Ueda and Yoshii “okaa-sensei” or mother-teacher. The nickname reflects a wider sense of how faculty-led trips are a safe way to experience international travel for the first time, which is not unique to the Japan trip.

For seniors Bobby Nickel and Megan Baskin, their Oxford, England, pre-law trip led by Associate Teaching Professor Michael Costello was the first time either had traveled internationally, and both had trepidation about the long plane ride.

“I took a photo of the food on the overnight flight because I had never seen that before,” Nickel said. “The first time you fly over there you feel like it is taking forever, and on the way back, even though it’s a longer flight, technically, it felt like nothing.”

The trip was the inaugural collaboration with the University of Missouri–Kansas City School of Law’s Oxford Continuing Legal Education. Costello attended as a CLE student, then started thinking about how undergraduates would benefit. 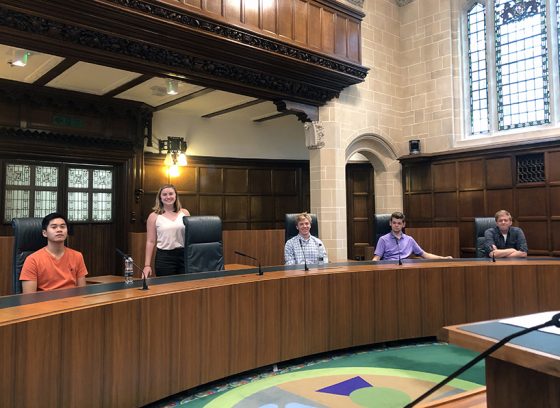 From left: Richard Phan from MU, Megan Baskin and Bobby Nickel from UMSL and Kris Sturm and Landon Volkmann from UMKC. (Photo by Michael Costello)

“I envisioned what a wonderful opportunity it would be for undergraduate students thinking about a pre-law or an international affairs career to spend time with 25 lawyers and business people being taught by British lawyers, judges and professors from Oxford,” he said. “The students got mentorship out of it. The lawyers enjoyed interacting with them socially and professionally.”

Costello received permission to make it an intercampus course, and the first cohort of five included students from UMSL, UMKC and the University of Missouri–Columbia. They attended lectures in the morning then toured in the afternoon, visiting the Supreme Court and Parliament and hiking to Arthur’s Seat in Edinburgh, Scotland. On free days the students and lawyers took other trips, visiting Wales and Bath and even going as far as Florence, Italy.

They supped in the Great Hall at Christ Church, the Harry Potter dining hall film site. English food, such as the full English breakfast, clotted cream and fresh smoothies, impressed Nickel, and Baskin was amused to learn that Winston Churchill invented the romper during World War II. Both were struck by the differences between American and English culture, such as how fashionable and formal everyone in the UK dressed.

“It was an extraordinary experience, and I’m so glad I went,” Baskin said. “It’s a great opportunity to network and meet people and learn about different culture and people from different nations and how they go about their lives. I think I am a lot more independent and a lot more open-minded and understanding now.”

Nickel feels similarly and he plans to return to Oxford soon, possibly as a student.

“I’m applying to three UK law schools,” he said. “Mostly for kicks, but you never know.”