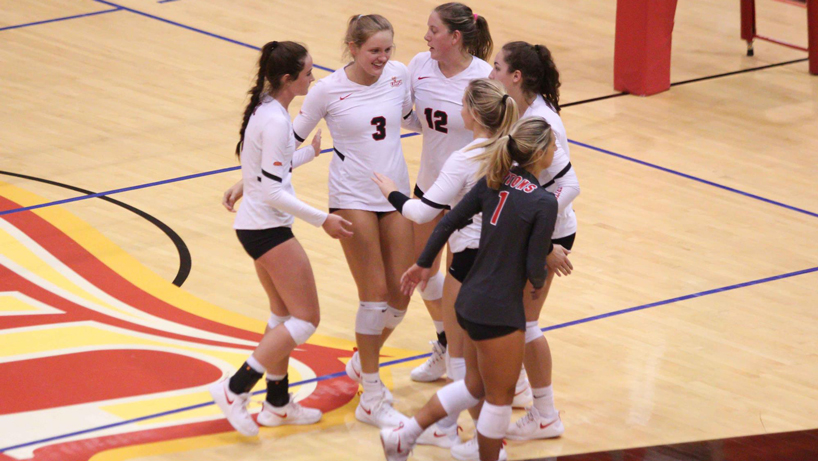 The UMSL volleyball team finished off its season with a 3-0 sweep of Maryville on Saturday, closing out the year with a 14-15 overall record and a 7-11 mark against Great Lakes Valley Conference competition.

Volleyball
UMSL wrapped up the 2018 season on Saturday with a 3-0 win at Maryville, bouncing back from a 3-2 loss to co-Great Lakes Valley Conference champion Illinois Springfield earlier in the week. Freshman Megan Woll averaged 7.00 digs per set in the two matches and ended the year with 620 digs, a single-season record. Offensively, junior Kylie Rudsinski averaged 3.75 kills per set. The Tritons finished with a 14-15 record, including a 7-11 mark in GLVC play.

Men’s Basketball
UMSL took to the court for the first time this season with a Thursday exhibition game at NCAA Division I team Saint Louis University. The Tritons trailed by 10 at the half and fell to the host Billikens 71-49. Sophomore Shane Wissink and senior Johnathan Matthews each scored 14 points. UMSL will open the regular season this Friday and Saturday at the GLVC/GMAC Challenge, hosted by Maryville. The Tritons face Walsh on Friday and Tiffin on Saturday.

Men’s Golf
UMSL wrapped up the fall portion of its schedule with a runner-up showing at the McDonough Cup in Orlando, Florida. Paced by top-10 finishes from senior James Henderson and freshman Joel Sylven, the Tritons put together a 54-hole score of 877 (294-297-286). Henderson tied for third, shooting a season-best 214 (73-69-72), while Sylven picked up his third top-10 finish of the year with a tie for ninth, carding a 217 (69-77-71). UMSL opens its spring schedule Feb. 18-19 at the Newberry Invitational in Kiawah Island, South Carolina.