James Bates eats an early lunch on the porch of his turn-of-the- century brick bungalow on the South Side of Chicago. At the moment, the sun is shining and the sky is clear, a nice reprieve from the heavy rains the day before.

Yet, just half a block away, water is still pooled a few inches deep at the corner at 71st and South Michigan. Its presence is a wet reminder of what happens every time it rains in this part of the city. After forty years in his house, James no longer keeps anything valuable in the basement. To do so would create a moldy mess.

“It gets pretty bad all the way up 71st. If it’s raining hard, it’s gonna come up over the sidewalk. Sometimes it rains so bad, if you’re on the west side of the city,” James says, “you can’t get back this way because all the viaducts are flooded. You got to go all the way down to 90-some- thing to get back here.” 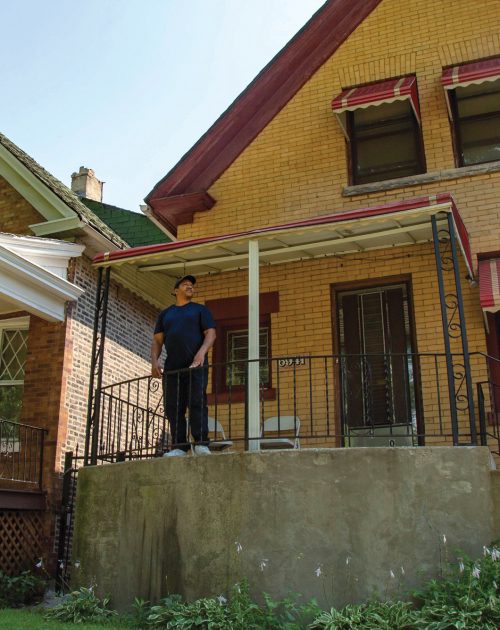 James Bates stands on the front porch of his South Side home.

City officials and organizations are very aware of the condition James and thousands of other Chicagoans find themselves in every time it rains.

In fact, for its entire 180-year existence, the city has been shifting, manipulating, and even fighting against the flow of water to prevent not only surface flooding and the spread of disease, but also the contamination of Chicago’s freshwater drinking supply, Lake Michigan.

This issue has literally shaped the city of Chicago.

Mary Pat McGuire, an Illinois landscape architecture professor with homes in Urbana and Chicago, is joining the efforts to address urban flooding. With funding from Illinois-Indiana Sea Grant, a land-grant university program that focuses on coastal community issues, she and her graduate student, Jinyu Shen, are leading an ambitious research project looking at how to sustainably design stormwater solutions in the Chicago region—above and below ground.

Mary Pat’s attention is on ecological sustainability, that is, creating a way for stormwater to infiltrate and be absorbed by the ground in a way that is nourishing for the city, not crippling. Mary Pat and her interdisciplinary team of landscape architects, geologists, and civil engineers from the university are focusing on the southern part of the Chicago landscape, an area where fewer projects like this are taking place.

“See, Cook County comes down to here,” says a state geologist, Andrew Phillips, pointing to a faded map in his office at the Illinois State Geological Survey. “This green here, that stretches all the way up to here? That’s all ancient lake plain. And then the yellow bits are ancient beach ridges. They were the shoreline of the lake at various stages.

“I don’t think most people in Chicago know that before the glaciers retreated, Chicago itself was a lake bottom.”

What the glacier left behind thousands of years ago as it carved out the basin that is Chicago was “glacial till,” or the sediment the ice was carrying as it melted. The sediment was made up of a wide mixture and composition of clay, sand, silt, gravel, cobbles, and boulders that handle stormwater very differently.

When Native Americans, and then European settlers, first populated the area we now define as Cook County, they navigated swamps, wetlands, creeks, and rivers. They made their homes on ridges and bluffs—the highest ground they could find.

Today, close to 60 percent of Chicago’s land mass is paved or covered by buildings.

But it didn’t take long for Chicago’s population to increase at an exponential rate—from about four thousand people in 1837 to over 9.5 million in 2018. In those intervening years, so much of the area has been covered by impervious surfaces, like pavement and asphalt, that the original ecological function of the land has been impaired.

Today, close to 60 percent of the city’s land mass is paved or covered by buildings. This expansion has greatly reduced the ability of the ground to absorb stormwater, leaving aging pipes to handle both stormwater and sewage. When the system becomes overwhelmed, the unfortunate mixture ends up in streets and basements.

Andrew, along with fellow geologist David Grimley, is examining the soil, adding greater detail to what was done by renowned geologists a hundred years ago. With so much of the soil in the area having been altered in some way or covered by concrete, there are still some fundamental unknowns. Just accessing the soil in a populated urban area is challenging, too. Permits need to be pulled in order for holes to be dug.

The geologists’ work on the project is the first step in looking for further solutions for flooding in this area using green infrastructure. With a sound evaluation of the characteristics of the soil, the effectiveness of green infrastructure design improves, helping residents like James avoid frequent flooding in their homes. A better understanding of the soil could mean the difference between a failed effort and a successful one.

Calumet City and Midlothian, two towns just south of Chicago in the Calumet Corridor, have agreed to serve as pilot sites and have their soil tested for its makeup and permeability— or how quickly the water goes through the soil. While not in the Chicago city limits, these two municipalities share the same geographic characteristics—and same problems—as the South Side.

In the 1970s, the city began the Tunnel and Reservoir Plan, or TARP, that has built massive underground tunnels and regional reservoirs to take on these issues and act as a receptacle and/or conduit for stormwater. The entire project, due to be entirely completed in 2029 at a cost of over $3.7 billion, has accomplished a great deal of what engineers intended, but it still hasn’t been enough. With climate change bringing more frequent and intense rainfall to the area, urban flooding is all but guaranteed to continue.

The tunnels and reservoirs, referred to as “grey infrastructure,” have created unintended consequences.

Water that falls on and is used in the city today travels by way of these tunnels to the Mississippi River, ultimately ending up in the Gulf of Mexico. This treated wastewater containing high levels of phosphorous is a contributor to the Gulf’s “dead zone,” an area of water void of oxygen that is unable to support aquatic life. The dead zone is roughly the size of Connecticut.

While the TARP tunnels have been a successful approach to stormwater management overall, the city acknowledges that additional innovations are necessary. Chicago has employed green initiatives even before it introduced a green infrastructure strategy in 2014. Since then, even more green roofs, rain gardens, and permeable pavers have been scattered throughout the city. Mary Pat’s team hopes to take what they learn through their scientific research and add to this expansion of green solutions with a target on strategies to retrofit impervious and compacted land.

Ashlynn Stillwell, professor of environmental and civil engineering at Illinois, and her graduate student Reshmina William plan to use the soil data that Andrew and David gather to inform the green infrastructure model they are developing.

They are doing this by evaluating “hydraulic conductivity,” a measure of how quickly water will flow through the soil. Ashlynn likens the process to a sponge: There is the actual soil material—that’s the sponge—but there are holes. Pour water in the sponge, some of it soaks in, some of it drains out the bottom, and some of it remains in the sponge making it feel wet.

The pair will apply their calculations to different types of soil, which will provide them with the data to calibrate green infrastructure recommendations by McGuire based on the soil conditions.

“Green infrastructure is sometimes perceived to be a bit of a risky investment. We haven’t studied the role that native and urban soils play,” Ashlynn says. “That’s the gap we’re working to fill with this project.”

GOING WITH THE FLOW

Landscape architects have always been involved in integrating nature into cities. Parks such as Lincoln Park, Central Park in New York City, and Back Bay Fens in Boston were all early forms of storm- water design and management. More recently, the profession has adapted and expanded its role within highly modernized urban areas to tackle stormwater in a more constructed manner, retrofitting cities for climate adaptation.

Mary Pat, as a landscape architect and the lead on this project, is part of wave of designers who are at the forefront of trying to change the stereotypes of what people in her field actually do.

“I believe that if landscape architecture is going to be an effective profession in climate adaptation, we need to tackle and redesign our primary medium—the urban ground plane itself—by working in partnership with cities and engineers,” Mary Pat says.

“Water has become a significant focus of designers and some of us have taken a particular interest in trying to figure out how we can make the ground act as a large-scale contributor to stormwater infrastructure.”

Still, Mary Pat is just as concerned about the aesthetic appeal of her design recommendations as their ultimate functionality, and she is not hesitant to rely on others; she knows her designs are only as good as the data she receives from her team.

“That’s the coolest thing about this project,” says David. “We have this interdisciplinary group working with a landscape architect who has a really keen vision on how to integrate this all together. That’s been Mary Pat’s vision: to bring the natural landscape, geology, and soils together.”

This past spring Mary Pat’s work caught the attention of Houston Public Media, which dedicated a segment to flood mitigation. Houston, like Chicago, grew at such a rapid pace that impermeable surfaces, like buildings, streets, and pavement, took over much of its native marshes and swamps.

The city, which saw catastrophic destruction from Hurricane Harvey in 2017, is weighing its options on how to prevent future flooding events: rely on tunnels, turn to green infrastructure, or incorporate both like Chicago has done.

What Harvey demonstrated with unprecedented force were the horrifying complications that arise when water has nowhere to go.

“We’re understanding that the future of cities is not about trying to control nature and get rid of ‘nature,’” says Mary Pat. “Instead, the future of cities relies on how we integrate natural processes for greater resiliency so that when storms come in with increasing frequency, we have actually designed for them.”