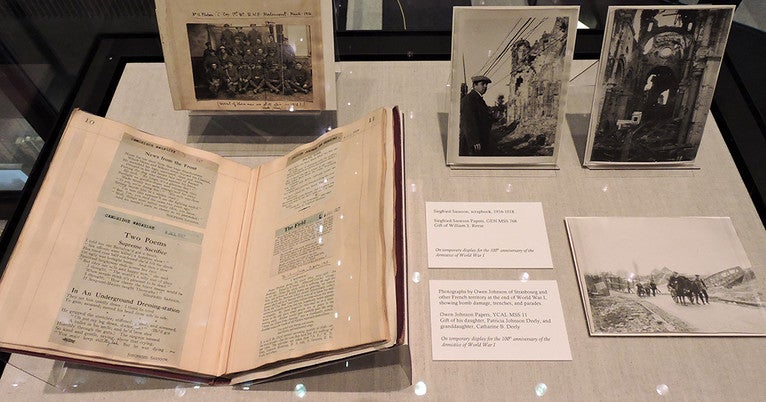 In conjunction with the 100th anniversary of the armistice of World War I, the Beinecke Rare Book and Manuscript Library will host the temporary display “Siegfried Sassoon: Scrapbook & Owen Johnson: From ‘Stover at Yale’ to ‘The Wasted Generation’” Nov. 6-12.

Michael Morand, the library’s communications director, will lead a discussion about the display on Monday, Nov. 12 at 4 p.m., as part of the weekly “Mondays at Beinecke” series of gallery talks. It will be followed by tea on the Beinecke mezzanine.

Siegfried Sassoon (1886-1967) was an English poet, writer, and soldier. He was awarded the Military Cross “for conspicuous gallantry during a raid on the enemy’s trenches” during his service in World War I. The citation noted, “He remained for 1½ hours under rifle and bomb fire collecting and bringing in our wounded. Owing to his courage and determination all the killed and wounded were brought in.”

Sassoon became one of the leading poets of the war and an outspoken anti-war advocate. His poetry speaks to the horrors of war, and Sassoon satirized those he held responsible for World War I and its associated patriotic pretensions.

The Siegfried Sassoon Papers in the Beinecke Library consist of correspondence, writings, photographs, a scrapbook, and other papers by or related to Sassoon, from the beginning of the First World War to his death in 1967. The scrapbook in the temporary display at the Beinecke Library includes a photograph of Sassoon and fellow soldiers and clippings of some of his poetry.

Owen Johnson (1878-1952) was an American novelist and short-story writer. He is best remembered for juvenile stories about his student days at the Lawrenceville School in New Jersey and a best-selling novel, “Stover at Yale” (1911), in which he criticized many aspects of college life, including the senior societies at Yale, from which he had graduated in 1901.

He did most of his early writing in Paris, where he lived after his first marriage in 1901. During World War I, he served as war correspondent for The New York Times and Collier’s and wrote “The Spirit of France” (1915), a nonfiction book about the heroism of the French people. This was followed by “The Wasted Generation” (1921), a novel about an American who enlists in the French Foreign Legion at the outbreak of the war.

The Owen Johnson Papers in the Beinecke Library contain drafts of novels, plays, and short stories, plus a variety of personal papers, including records, photographs, and papers on the Committee on Allied Tribute to France. The library’s temporary display in connection with The Armistice centennial includes first editions of Johnson’s books and photographs he took in France.

The Beinecke Library’s exhibition hall is free and open to the public daily. Visit the library’s website for information about daily hours.