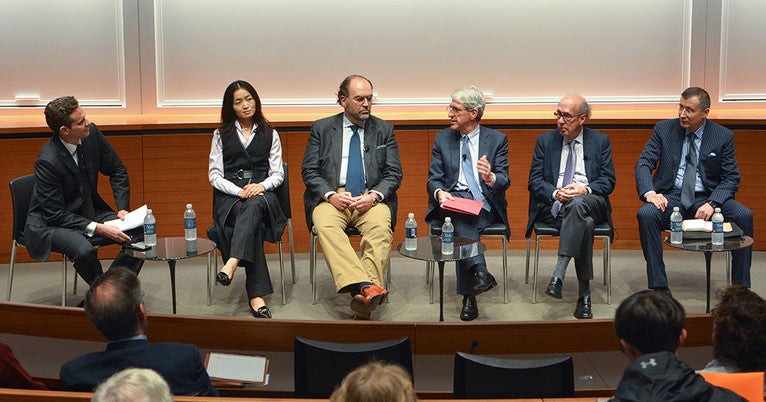 President Xi Jinping of China has marked 2049 — the centennial of the founding of the People’s Republic of China — as the date by which his country will be a fully developed and prosperous global power. A panel of Yale faculty on Nov. 2 considered China’s chances of meeting the goal and the implications for the United States should it succeed.

To me, 2049 is China coming back to its long-term track and occupying its rightful place.”

Tsyvinski, who has studied China’s economic growth, said the nation’s rise as a global economic power can be viewed as China returning to its historical position following the “century of humiliation” — a period between 1839 and 1949 when the country was subjected to interventions and invasion by Western powers and Japan.

Anderlini asked the panelists whether the United States ought to consider China a substantial threat to its dominance of the global order.

Roach, former chair of Morgan Stanley Asia, explained that a bipartisan narrative that has formed in Congress and the U.S. government casts China as a major threat that has gained advantage through various unfair practices.

Salovey noted the mutually beneficial relationships between investigators in the United States and China. He asked members of the audience, which filled a large lecture hall at SOM’s Edward P. Evans Hall, to indicate whether they had collaborated with Chinese colleagues on research. More than a dozen people raised their hands.

“I would argue that such collaborations have led to discoveries that could help the world,” he said. “Of course, we have to be careful … not to be naïve or put our heads in the sand with respect to fair competition, but we should try to appeal to the best possible outcomes of a developed China and the United States. We could build on one another’s strengths to find solutions to pressing global challenges.”

The U.S. has been very successful with selling the idea of democracy and capitalism with lightly regulated markets as the best way to manage society.”

Monteiro posited that whether or not China becomes a major threat to the United States could hinge on its ability to develop a brand — a vision of the ideals the country represents — that it can sell to other countries.

“This has been the core of the U.S.’s success,” Monteiro said. “The U.S. has been very successful with selling the idea of democracy and capitalism with lightly regulated markets as the best way to manage society.”

China needs to develop its own narrative for marketing its system to the globe, he said.

Tsu explained that China has couched its rise over the past several decades in the narrative of the underdog and has adopted elements of Western system while maintaining its own cultural and political identity.

“For China, assimilating the best parts of the West was never about becoming the West,” she said. “It was about a stepping stone to becoming something better … What the rest of the world sees at the very least is an alternative to the U.S.-centric worldview.”

Anderlini, noting that the average Chinese citizen knows more about the United States than a U.S. citizen knows about China, asked the panelists to identify what they think Americans should seek to learn from its rapidly growing rival.

Tsu urged the audience to watch Chinese movies, particularly its summer blockbusters, and read Chinese science fiction to gain insight into the country and its society.

“As much as I think economics is very important, I think it’s equally important to look at history and culture,” she said. “Self power is also a very strong component of China’s presence in the world at the moment.”

Salovey suggested the United States should learn from China’s infrastructure projects, such as the high-speed rail system and modern airports.

“The economic and political contexts are dramatically different, but we have not developed needed infrastructure like railways and subways in this country, and we are paying the price for it,” he said.

Anderlini asked the panelists to weigh in on the resilience of China’s economy.

Roach said that many commentators have been incorrectly predicting the demise of China for the last 20 years. China has the ability to meet its challenges, including environmental degradation, demographic concerns, and excessive investment, he noted.

“They do it in a position of strength with the largest reservoir of domestic saving in the world,” Roach said. “They can deploy their saving to build infrastructure; to shore up the social safety net … They’ve got a lot of staying power.”

The Chinese government’s attempts to control the flow of information presents a potential vulnerability in a world economy that increasingly depends on sharing information, Monteiro said.

“There is a tension between the need to control information for the purpose of maintaining the current regime on the one hand, and on the other hand, the need to drive innovation, which requires spreading information around,” he said. “I’m not sure it’s a manageable process for them.”