Notre Dame Forum speaker Wenders: ‘I hope being eye to eye with Pope Francis somehow gets to you’ - EduBlog.News

Notre Dame Forum speaker Wenders: ‘I hope being eye to eye with Pope Francis somehow gets to you’ 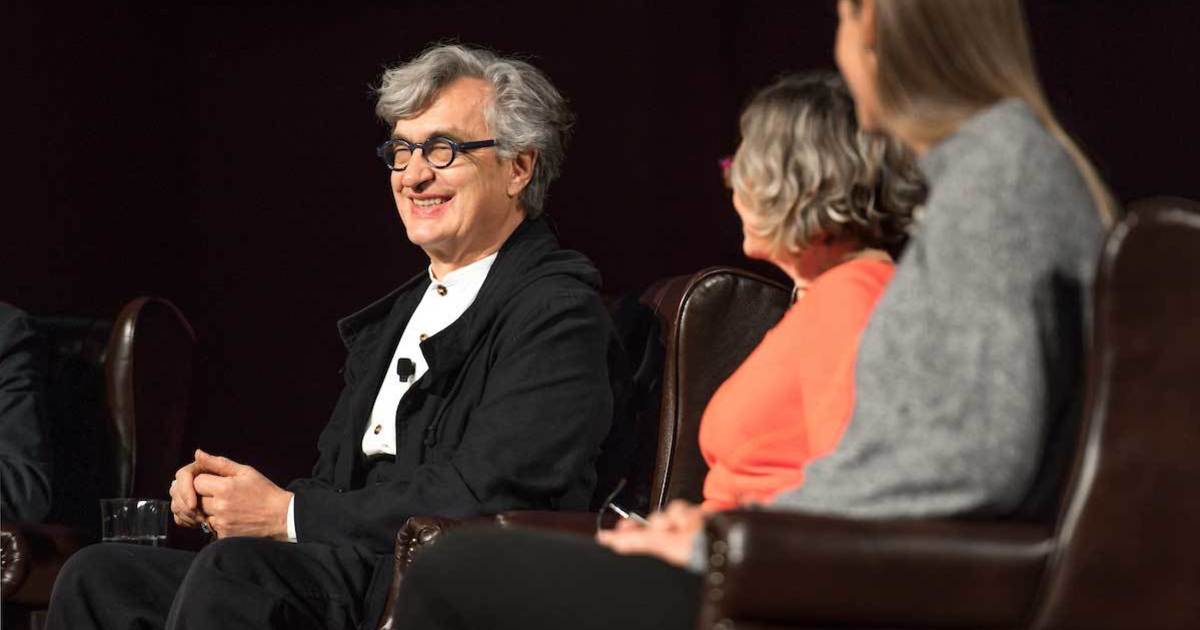 In the second of three Notre Dame Forum fall 2018 events, Wim Wenders, internationally acclaimed filmmaker and photographer, spoke to an audience of 750 following a screening of his newest documentary, “Pope Francis: A Man of His Word,” in the Leighton Concert Hall of the DeBartolo Performing Arts Center at the University of Notre Dame.

Jim Collins, professor and chair of the Department of Film, Television, and Theatre; and Kathleen Sprows Cummings, associate professor of American studies and history and director of the Cushwa Center for the Study of American Catholicism, co-hosted the conversation with Wenders about the film, Pope Francis and the responsibilities of art.

When the Vatican’s communication office approached Wenders about making a film and he agreed to direct a documentary, he said he had some sleepless nights, realizing during the editing process that “this was a different sort of responsibility than any film I’ve ever made.”

Commissioned with making a film accessible to everyone, Wenders wondered how to convey the pontiff to the widest possible audience. He wanted his creation to align with the Holy Father’s values, and he was on a limited budget.

“I realized this film was not about Pope Francis; it was a film with Pope Francis,” Wenders said. “I decided it could not be expensive — it had to be a ‘poor’ film. We wouldn’t go on each of the journeys because there were already film crews wherever Pope Francis went.”

Wenders had unprecedented access to Pope Francis, including eight hours of face-to-face interviews, and as he began shooting, he realized the work itself was about closeness.

“I believe Pope Francis’ unique talent is to be close to people,” Wenders said. “If I was going to be granted this closeness, then that was exactly what I wanted to pass along.”

However, providing this closeness to viewers required Wenders to give up some of his own proximity to his subject during the interviews. Using a technique developed by filmmaker Errol Morris, Wenders interviewed Francis by facing away from him and transmitting his own face to a teleprompter. Francis watched Wenders ask questions on the teleprompter’s glass, and the effect created for the viewer is that of having Francis look you directly in the eye.

Wenders added: “The freedom Pope Francis takes, and the courage … I realized he was fearless. I had never seen that in a man that I had encountered that closely. I felt that translated in the film.

“My hope is that some of the courage and positive energy and deep belief of Pope Francis rubs off, and that being eye to eye with him somehow gets to you.”

Asked how making this film affected him personally, Wenders said that in spending that amount of time with Pope Francis, memorizing his words in the process of editing the film and being in contact with his endless energy and fearlessness, he began to ask himself: “Well, what am I afraid of? I don’t really have to be afraid.”

Wenders’ filmmaking career spans five decades and multiple continents. His numerous honors include three Oscar nominations (for “Buena Vista Social Club,” “Pina” and “The Salt of the Earth”), a BAFTA award for best director and a best director award at the Cannes Film Festival for “Wings of Desire,” perhaps his best-known film, which is about an angel falling in love with a mortal. At the 2015 Berlin International Film Festival, Wenders received the Honorary Golden Bear, the highest prize awarded, for his lifetime achievement.

Since its establishment in 2005, the Notre Dame Forum has featured major talks by leading authorities on issues of importance to the University, the nation and the larger world, including the challenges and opportunities of globalization, the role of presidential debates, immigration, sustainability and the place of faith in a pluralistic society. The 2018-19 Notre Dame Forum is themed “The Catholic Artistic Heritage: Bringing Forth Treasures New and Old.”