Teach in 12 student hopes to bring passion for the outdoors into a classroom setting - EduBlog.News 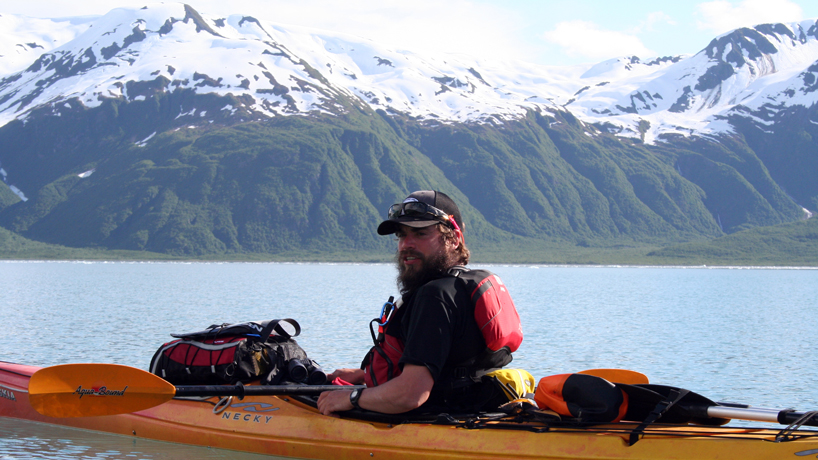 Bobby Schultz, who is getting his teacher certification through the UMSL College of Education’s Teach in 12 program, has held a variety of jobs since earning his bachelor’s degree, including a stint as a sea kayak guide in Alaska. (Photos courtesy of Bobby Schultz)

Bobby Schultz had long wanted to go back to school to get his teaching certification. Things just kept getting in the way.

Like in 2011, when he landed a job tracking bears in Glacier National Park for the Northern Continental Divide Grizzly Bear Project. Or in 2015, when he again gave serious consideration to starting a postgraduate education program only to get pulled away to a gig as a sea kayak guide in Alaska.

He wanted to be a teacher. The call of the wild was just too strong.

This August, after six months studying goshawks in Pennsylvania, he finally enrolled in the University of Missouri–St. Louis College of Education’s Teach in 12 certification program, with an expected graduation date of December 2019. He wants to become a high school biology teacher.

A St. Louis native, Schultz plans to migrate back home soon for his year of in-school practicum teaching at one of UMSL’s studio school partners in the area. But that doesn’t mean he can’t fit in a couple more salamander-tagging sessions with his friend in Pennsylvania before he does.

“Something I care about a lot is conservation,” Schultz said. “I’m a huge believer that people aren’t going to care about things unless you teach them about it. What originally got me even thinking about environmental stuff was what my teachers had taught me. More than anything, I want to teach because I want to inspire the next generation to care.”

You’d be hard-pressed to find a science teacher with a more varied work history than Schultz.

“Wouldn’t you just want Bobby as your teacher?” said Associate Professor Nancy Singer, who has Schultz in class this semester. “He’s so enthusiastic. He loves kids. He wants to teach his content. Part of teaching is just sharing that love of what you do. He has that.”

Schultz earned his bachelor’s degree in psychology and sociology from the University of Missouri–Columbia. His urge to be an educator began in earnest when he started working as a wilderness therapist at Elements Wilderness Program in Utah in 2007.

He would take at-risk youth backpacking and teach them self-reliance while also assisting in counseling them. Although his involvement with the program lessened over the years, he would still pick up a shift or two when he could, all the way through February 2017.

“I really loved helping the kids,” Schultz said. “A lot of these kids have never had to take responsibility. We’re backpacking through the mountains and desert, which is hard enough for kids who aren’t super into that stuff. Then we’re starting fires with bow drills, living outside, cooking our own meals. Then we’d do a lot of group therapy and stuff like that. Through that job I just picked up a lot of outdoor skills, just learned a ton about backpacking and orienteering. Living out there, you kind of become an expert, you know?”

Schultz parlayed that expertise into a job hanging out with grizzly bears. His role was to install barbed wire on trees in Glacier National Park that would catch the bears’ fur when they rubbed on it, or he’d collect fur from trees that had already been wired and send it back to the lab for testing.

That way, they could track which bears were populating different areas of the park. Schultz said he routinely got closer to grizzly bears than most people would want, but he never felt in danger.

The bears were very accommodating to their human interlopers.

“People get concerned about the barbed wire hurting the bears,” Schultz said. “Not even a little. And, honestly, they almost seem like they enjoy it. Like maybe it gets their itch a little better or something.”

From there, Schultz was off to Alaska for three years, to guide tourists through the choppy surf on their sea kayaks and throw out interesting facts about any whales, seals, sea otters or other marine life they might encounter along the way. Then he was on to Pennsylvania to help his longtime girlfriend on her master’s project studying goshawks. 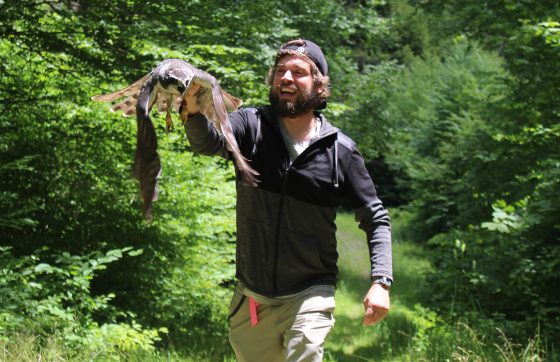 Schultz, who wants to be a high school biology teacher, tagged goshawks in Pennsylvania over the spring and summer before starting the Teach in 12 program in August.

From February through April, they recorded the songs of the small birds of prey. Starting in May, they played the calls back into the forest and saw how many responded to get an idea of the population size.

“They’ll respond if they hear their call,” Schultz said. “Pretty aggressively, because they think a competitor is there.”

It’s not necessarily in Schultz’s nature to settle down, but he hopes to make a career for himself as a teacher in St. Louis. Singer said Teach in 12 is perfect for people such as Schultz who are looking for a simple, yet rigorous, path to a career in education.

UMSL started the program in fall 2015 as a way to get teacher candidates all the coursework they’d need for certification in a little more than a year. Students work through an accelerated course of study that includes two semesters of teaching at one of UMSL’s studio schools, where the College of Education’s regular undergraduate teacher candidates also do their practicums. When they’re through with Teach in 12, students also only have four more courses to take for a master’s degree.

“It has been wildly successful,” Singer said. “Bobby is very much like a lot of the student portraits we see in Teach in 12. It was designed for working adults, for people who wanted to be career changers. A lot of them have real experience in jobs that are related to their fields. Bobby is going to be a biology teacher, and he was just out there tagging hawks. How cool is that?”

Schultz said Singer and Academic Advisor Ellen Duncan have been extremely helpful during his transition back into the world of academia. Any day now, he will find out his practicum teaching destination for next year.

He’s compulsively checking his email in anticipation, eager to start sharing his passion for the outdoors with his future students.

“If I’m out there doing conservation work, I’m just one person,” Schultz said. “If I can teach, over my career, hundreds or thousands of kids, that’s a way bigger difference.”