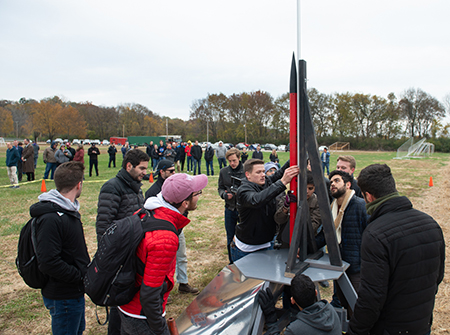 The sky’s the limit for a new student organization at Southern Illinois University Edwardsville! On Thursday, Nov. 8, the Cougar Rockets successfully launched their first high-powered rocket on SIUE’s campus near Korte Stadium.

“We are thrilled with the support we have received and the outcome of our first launch,” said Cougar Rockets Founding President Egemen Erten, BS ’18, who is pursuing a master’s in mechanical engineering. “We launched a 63-inch rocket that reached 5,000-feet before its parachute deployed and it landed safely.” 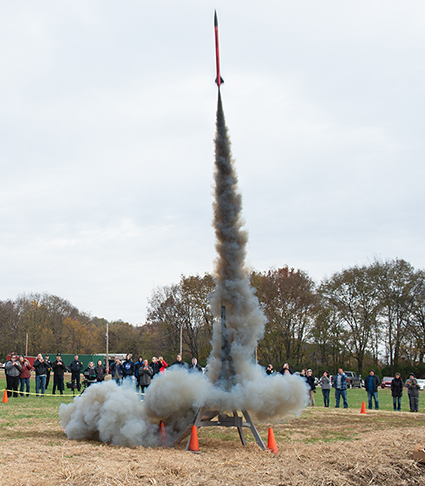 Erten and founding vice president Franklyn Hernandez, a senior studying electrical engineering, share a belief that the goal of a successful engineer is to create, build, design and innovate to make a difference.

“This has been a team effort with our members putting in many hours to assemble this rocket and prepare for our launch,” he added. “This organization offers students opportunities to build leadership and teamwork skills and apply technical knowledge to real rocket systems.”

A crowd of 65 campus and surrounding community members viewed the rocket’s spectacular climb. The Cougar Rockets’ faculty advisor Michael Denn, PhD, instructor in the School of Engineering’s Department of Mechanical and Industrial Engineering, noted the achievement will launch the group into more advanced rocketry.

“This was fantastic,” Denn exclaimed. “It’s the largest rocket we’ve launched, and it’s just the beginning of where this organization will go, as we’ve got a lot more planned for the future. I’m proud to be working with these enthusiastic students who came up with the idea to create this organization and have worked diligently to see this launch come to fruition.”

The Cougar Rockets’ long-term plan is to participate in the 2020 Intercollegiate Rocket Engineering Competition. This competition consists of launching a rocket with an 8.8-pound payload and target altitudes of 10,000-30,000 feet above ground level. “This is considered high-powered rocketry (HPR), which is defined by the size and thrust of the rockets,” Denn said. “Some of the team members will earn National Association of Rocketry certifications in order to purchase HPR motors and ensure they are complying with safety codes.”

“I wanted to make a difference in SIUE’s history by creating a brand like the Cougar Rockets and giving others the opportunity to create and build something new. Space is the future.”