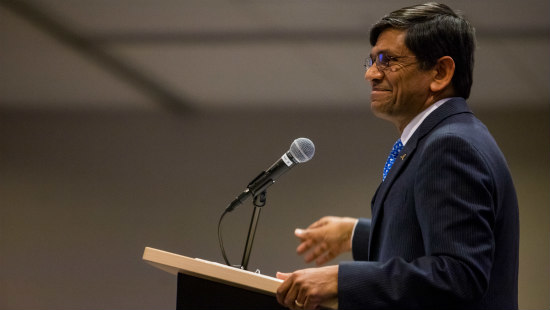 Chancellor Mauli Agrawal announced a $20 million investment in student scholarships and outlined the university’s goals for the years ahead. Photo Credit: Brandon Parigo.

On Nov. 8, University of Missouri–Kansas City (UMKC) Chancellor C. Mauli Agrawal, Ph.D., delivered his first State of the University Address since he began his tenure as the leader of UMKC this past June. His message was ambitious and hopeful.

“True greatness can be achieved here,” Agrawal said. “UMKC has the potential to move into the top ranks of the great urban public research universities in America. All of the ingredients needed are already here – we just need to put them together in the correct fashion.”

“KC Scholars provides financial aid and other forms of support to low- and modest-income families in the Greater Kansas City metropolitan area so that young people can attend college,” Agrawal said. “Unfortunately, there are far more students who qualify for this assistance than KC Scholars has the resources to serve. So, I am proud to say that UMKC is stepping up to meet that challenge. As the university that was created to serve this community, this is our role and our responsibility.”

Much like President Choi’s address last September, another major theme in Agrawal’s address was the role of research in the university’s mission. “Our community and the world need new knowledge and new discoveries to solve our most pressing problems,” he said. “[This task] is at the core of our public service mission and one that we must embrace.”

To meet these challenges, the chancellor announced an intent to increase research funding by 50% over the next five years, with an overall goal to reach $60 million in funding by 2028. Agrawal also highlighted UMKC’s potential to advance research by partnering in the UM System’s Translational Precision Medicine Complex (TPMC) project, especially since the addition of the university’s new Data Science Institute (DSI).

Throughout his address, Agrawal emphasized the importance of UMKC’s service to the community. “Our new strategic plan makes one point very clear: our foundational commitment as a university is to provide an unwavering commitment to the development of our people,” Agrawal noted, signaling UMKC’s commitment to the UM System’s mission of pursuing excellence and advancing success for Missouri.