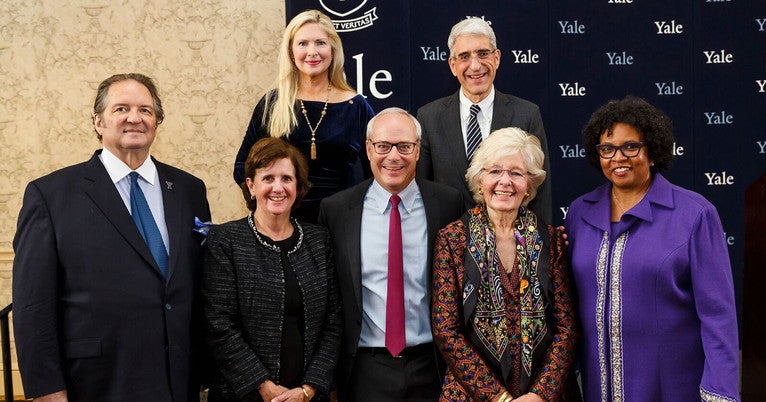 The annual Association of Yale Alumni Assembly and Yale Alumni Fund Convocation is a time to celebrate leadership, volunteerism, and the enduring connection between Yale and its alumni.

It is also a time to celebrate those who have given back — to the alumni community and the university at large.

Over the two-day AYA Assembly and Alumni Fund Convocation, Nov. 8 and 9, scores of volunteers were honored for their service across a number of disciplines, including awards for public service; for excellence; for leadership and service to the AYA, the Yale Alumni Fund, and the Office of Undergraduate Admissions; and for individuals and organizations.

The headlining event of the weekend was its closing one: the Yale Medal ceremony Friday evening. The Yale Medal, the highest honor awarded for volunteer service to the university, was presented to Lise Chapman ’81 M.B.A., Gregory Hall ’77, Bo Hopkins ’86 M.B.A., Margaret Marshall ’76 J.D., ’12 LL.D.H., and Sheryl Carter Negash ’82 in an emotional, raucous ceremony that featured singing, cheering, and a series of standing ovations — one for each medalist.

“I could not have become who I am without Yale,” said Marshall, sounding a note echoed by her fellow honorees. “I have a boundless sense of loyalty to it and have tried to repay what it has given me in every way possible way. My debt to Yale is great.”

That sense of reverence and love of Yale pervaded the awards ceremonies, starting with the Thursday evening reception for the AYA Board of Governors Excellence Awards, AYA Leadership Awards, and Alumni Schools Committee Awards. Much like the Yale Medal ceremony, the Thursday gathering was a celebration from start to finish, with multiple award winners, speeches by Yale staff and volunteer leaders, and flashes from phones and cameras lighting the space at Yale on York.

In the most sweeping of the ceremonies, the Board of Governors Excellence Awards honored 19 separate organizations in the regional club, Yale College class, shared interest group, and Graduate School of Arts and Sciences and professional school categories. Meantime, the AYA Leadership Awards recognized those who have made significant individual contributions, a group that included Yale veteran leader Glen Gechlik ’05 M.B.A. And the Alumni Schools Committee Awards honored outstanding contributors who exemplify the ambassadorial mission of the program and excellence therein.

“It’s always inspiring to be around so many alumni leaders who have done such great work and accomplished so much for Yale,” said AYA Executive Director and former Yale Medal recipient Weili Cheng ’77. “Having the opportunity to honor these incredible contributors is truly one of the highlights of my year.”

The Yale Jefferson Awards and Alumni Fund Chairman’s Awards took center stage during Friday’s lunch at the Omni New Haven Hotel, with more than 400 filling the ballroom to pay tribute to those honored. Awards presented at the gathering were the Yale Jefferson Awards recognizing an undergraduate, a graduate student, and an alumnus who have given back to their communities in extraordinary ways, and the Yale Alumni Fund Chairman’s Awards, which acknowledged exemplary fundraising volunteers.

“Honoring our volunteers is at the very core of what makes the AYA Assembly and Alumni Fund Convocation such a special event,” said Jocelyn Kane, managing director of the Yale Alumni Fund. “These are alumni who selflessly give back to Yale year after year to make a difference for students and fellow alumni alike. It’s nice that we have a chance to shine a spotlight on them and celebrate all that they have done and will continue to do for Yale.”

Here is a list of all the award winners recognized during the 2018 AYA Assembly and Alumni Fund Convocation:

AYA Board of Governors Excellence Awards