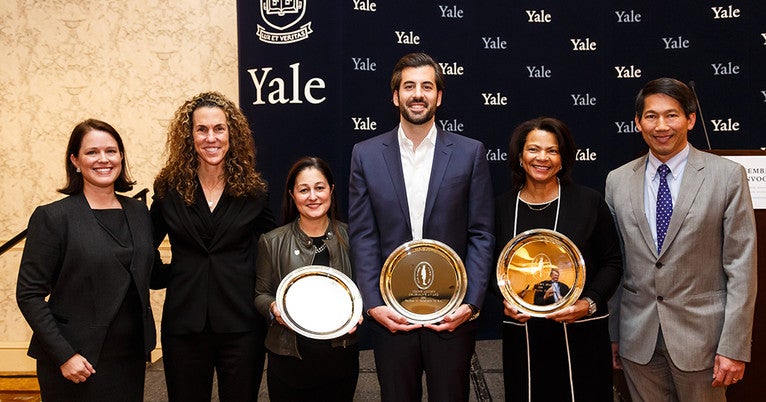 “Evangeline, Andrew, Rebecca, and Thomas go above and beyond for Yale and the Alumni Fund,” said Michael Tom ’83 M.D., chair of the Yale Alumni Fund board of directors. “They are wonderful examples of hard work, devotion, and creative leadership in service to our alma mater. We are honored by their efforts on behalf the Alumni Fund, and we are delighted to present them with this year’s Chairman’s Awards.”

Organized by Yale alumni in 1890 to secure operating funds for the university, the Yale Alumni Fund relies on a class-based network of volunteers to solicit annual gifts from alumni and parents in Yale College, the Graduate School, and the 12 professional schools. In the 2017–2018 fiscal year, 39,232 donors contributed $40.4 million to the fund, which is directed to current-use needs of the university, including financial aid, facilities, faculty support, and student activities. In the 128 years since its founding, the Yale Alumni Fund has raised more than $1 billion.

Evangeline Wyche Tross has been a class agent for more than 25 years. In June 2018, she completed two terms of service on the Yale Alumni Fund board of directors, where she was a member of the executive and nominating committees. Tross was also instrumental in leading the board as it planned last year’s combined Yale Alumni Fund Convocation and AYA Assembly. Tross volunteers for the Alumni Schools Committee, was a member of the YaleGale delegation to China in 2010, and has been an AYA Assembly delegate several times. She has twice been president of the Yale Club of Central New Jersey, served on her 25th and 40th reunion gift committees, and has sponsored sites for the Yale Day of Service. She says she enjoys making connections with fellow alumni.

Andrew Wallach is a longtime class agent who joined the Yale Alumni Fund board in 2005. He has served several terms since then, including on the executive committee and the volunteer education and training workgroup. He was a member of the reunion gift committees for his 20th, 25th, 30th, and 35th reunions and was co-chair for the latter two. He is the founding co-chair of the Leadership Giving Council and presented at the 2008 Convocation. Wallach is one of the original members of the Yale Nursing School Dean’s Leadership Council and is currently in his second term on the Yale Development Council. He was involved in the Yale Tomorrow Campaign as a board member of the Yale School of Management campaign committee and spoke as an alumni panelist for the Careers, Life, and Yale initiative. Wallach is co-chief executive officer of Spring Owl Management, providing investment management services to private, pooled investment vehicles. He and his wife, Peggy, have three sons, two of whom are Yalies: Marc ’12 and Eric ’21.

Becky Schamis has chaired the Yale School of Management Alumni Fund since 2016. Since then, SOM’s alumni participation in annual giving has grown to 54.8%, the highest percentage of all Yale’s schools. Schamis is a passionate spokesperson for annual giving and serves as a role model to other Alumni Fund agents. She provides invaluable advice and support to the development team as a member of the Yale SOM Advisory Board and was a committee chair for her 15th Yale SOM Reunion. Schamis is currently a consultant with The Acceleration Project, which provides strategic advice to small businesses, as well as a vice president of marketing and communications for The Ed. Foundation, a non-profit in her community serving local public schools.

Thomas Ginakakis has been the Class of 2009’s Yale Alumni Fund co-chair since 2011. He was a member of the Alumni Fund board of directors from 2011 to 2017 and rejoined the board this year after a hiatus. Ginakakis says he is passionate about Yale, and as co-chair of agents, he is dedicated to helping his class push beyond all fundraising goals for their upcoming 10th reunion. Ginakakis has also been a member of the Alumni Schools Committee since 2014. He has served Yale in several advisory capacities, including as a member of the Yale Alumni Fund Young Alumni Task Force in 2011, as a member of several board workgroups including the technology group in 2016–17, and as a new board member mentor. Ginakakis lives in New York City and works at VR Capital Group as an alternative asset manager.