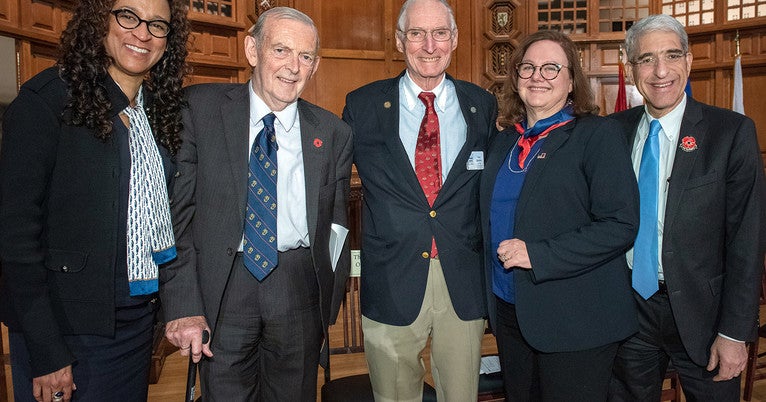 The Yale community gathered to honor veterans in a ceremony in Battell Chapel on Nov. 12. Part of a week-long series of events, the university’s annual Veterans Day celebration also commemorated the 100th anniversary of the signing of the armistice agreement between the Allied Powers and Germany that ended World War I.

Members of the Reserve Officers’ Training Corps (ROTC) and the Yale Police Department Color Guard participated in the ceremony along with representatives from campus veterans organizations.

“Memorials and ceremonies, like ours today … ensure that we never forget the human toll of war,” said President Peter Salovey. “Men and women have made and continue to make extraordinary sacrifices in service to this country. We gather here today out of gratitude and respect.”

The Veterans Day Brass Ensemble, composed of Yale School of Music students, performed the national anthem, taps, and a medley of service anthems. Veterans were asked to stand and be recognized when their service song was played.

One-hundred sixteen cadets and midshipmen, including 87 Yale students, meet their military commitments through the Air Force and Naval ROTC on campus, said Janet Lindner, vice president for human resources and administration. She noted that current and former service men and women from across “multiple generations and conflicts” were part of the ceremony.

Hillary Browning ’20, an Eli Whitney student who served in the U.S. Navy from 2010 to 2016, spoke about the important lessons she learned in the military. “You are forced to live up to your leadership’s expectations. By being forced to own up to your missteps, you learn to grow and mature and become the kind of person who can handle the massive amounts of responsibility the military will demand of you.”

“Each of you have made many sacrifices in the name of your service — missed birthdays, holidays, and quiet moments with your families,” Browning said, addressing veterans in the audience. “I commend you for staying true to your oath to honor and serve our country even when it wasn’t convenient or easy.” She also urged her fellow veterans to stay in touch with and support friends from the service, citing the scourge of suicide among veterans.

Beecher credited Opladen’s leadership as a driving force behind the return of ROTC to Yale in 2012. “His work was patient, determined, and relentless,” Beecher said.

Opladen, who served in the U.S. Navy 1967-1971, described the support he has received from across the university in building the veterans organization. “The AYA [Association of Yale Alumni] has been fully behind the effort we’ve made,” Opladen said. “Many organizations and people have come together as a community to make veterans feel comfortable on campus.”

Events such as Heroes Day at Yale Bowl, a partnership with the Athletics Department that brings veterans from the West Haven VA Hospital together with cadets and midshipmen, exemplified this campus-wide embrace of veterans, Opladen said. The AYA spearheaded the first veterans conference in the Ivy League — an effort that has been replicated at other institutions.

Paul Kennedy, the J. Richardson Dilworth Professor of History, spoke about the United States’ and Yale’s involvement in World War I. “In 1917 and 1918, American stepped forward to a new role, and so too did Yale,” he said.

Soon after the U.S. entered the war, “there was a whirlwind of activity on Yale’s Cross Campus and on the New Haven Green,” Kennedy said. “Yale was a great Gothic training camp, hardly a university at all.” The newly founded ROTC, an artillery training school, and faculty-led research in science, engineering, and medicine transformed Yale’s campus, he said.

Nearly 9,500 Yale students and alumni served in the Great War, and over 200 Yalies were killed. Their names are carved into the walls of Woolsey Hall, and the World War I memorial on Hewitt Quadrangle in the center of campus honors them.

“As we walk away from our ceremony today, we do so in gratitude and humility, and we walk away in the hope that one day we may cease to ravage this globe,” Kennedy said.

Yale is commemorating the armistice throughout the week with a series of lectures and events open to the public.