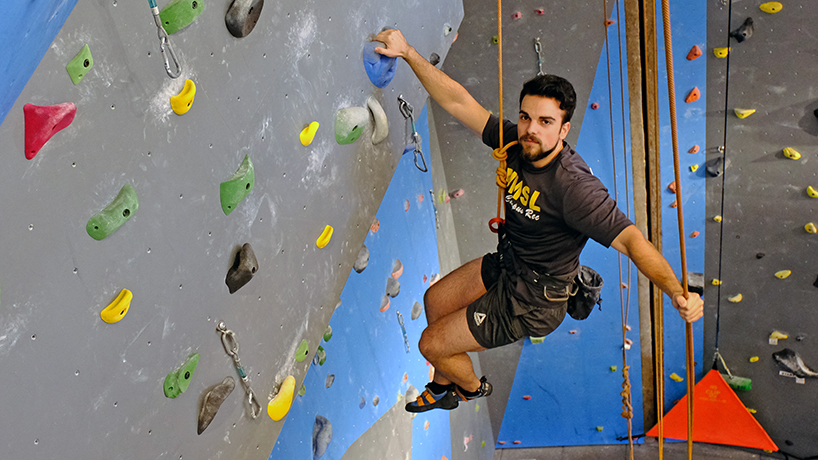 Angelos Kokkinis became invested in climbing – and eventually setting the different routes at the Climbing Center – after he started studying at UMSL. (Photo by August Jennewein)

Angelos Kokkinis might have grown up on a mountain, but he started climbing at the University of Missouri–St. Louis.

The UMSL/WUSTL Joint Undergraduate Engineering Program student hails from Greece’s Thessaloniki region, specifically the small town of Chortiatis, which is situated about 2,000 feet above sea level on Mount Chortiatis. When Kokkinis came to UMSL, he started working at the Recreation and Wellness Center and found himself drawn to the Climbing Center.

Before long, he started working there. Soon, he started designing the different rock wall configurations.

“I just was climbing a lot, and I liked it, and then the next thing was just do my own routes,” he said. “We needed someone to route set, and I volunteered.”

UMSL’s Climbing Center contains areas for top rope climbing, where the climber is secured by an anchor at the top of a 33-foot wall, and bouldering, un-roped climbing done on a 12-foot wall over an area cushioned against falls. It also sports two automatic belay devices and a thick rope for climbing.

Anywhere from 10 to 40 people a day climb in the rec center, depending on the time of year, and the frequency at which Kokkinis and others switch out routes depends on use and how often climbers request a change. At the very minimum, he will put up a new route once a month.

The process starts with the top-down removal of the old route. After selecting difficulty, Kokkinis maps out the route and installs the holds. He grades the routes on difficulty based on his climbing experience, and one of his goals is to ensure consistency among the various routes in the climbing area.

“The more you climb, the more you feel where the holds should be, and also, the more routes you put up, the better you become,” Kokkinis said. “If you want to make an easy route, you’d put bigger holds, easier holds. Easier to grab, closer together, and then you would have all the foot holds necessary, and it would be on less incline. If you want to make something harder, you would put harder holds, you would try to force different moves that are harder to perform like not just climbing up – maybe you would have to flag your foot or just use two fingers or something like that.”

Certain signature features define Kokkinis’ top rope routes and problems, as the shorter paths on the bouldering wall are called. He likes to start with a large, interesting hold and, from there, conceptually develop the whole. Though others help, he is the main route setter.

“I think not a lot of people know that the students route set,” he said. “It’s a good opportunity. I’m trying to have all of the people that work with me at least know how to do it, and if they choose to do it, they will have the tools needed, but I think it’s also a thing where you have to want to do it and like what you’re doing in order to be successful.”

Kokkinis is on track to graduate in December 2019 with a degree in electrical engineering, so he has about a year to pass on his trade. He started his undergraduate work thinking that he would study physics and computer science but soon realized that the first few years of study were indistinguishable from the engineering program and decided to switch.

“It’s more practical rather than theoretical,” he said. “It still has a lot of theory behind it, but compared to physics and computer science, which are pure sciences, it’s a bit more practical and applied in the real world. I’m still learning a lot of general stuff even though I’m into my electric engineering courses. I do like my courses right now though I’m not sure where I want to end up. I have to find out.”

Kokkinis discovered UMSL thanks to his middle and high school education at Anatolia College, an American-founded school in Pylaia, Greece. He felt included in the community at UMSL right away because of the International House.

Aside from school and work, Kokkinis enjoys understanding the mechanics and upkeep of his car, which is part of what attracted him to engineering in the first place, as well as being outdoors. He occasionally climbs outdoors, and he encourages anyone interested to come try it out for themselves, by take a climbing course or stopping by to chat.

“It’s a nice place to hang out,” Kokkinis said. “We want to have people just talk and climb if they want to. We’re a really friendly group.”