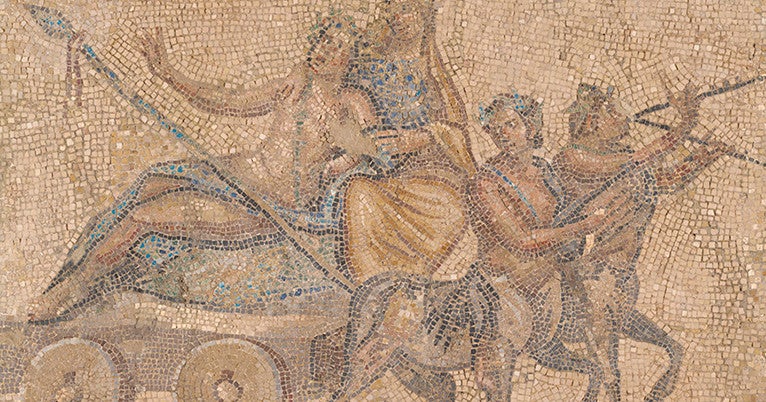 In ancient Egypt, rituals honoring the goddess Hathor could be noisy affairs. Worshippers shook sistrums — rattle instruments — to mimic the sound of the solar deity moving through rushes and grass as she strode to her temple.

A dazzlingly blue sistrum greets visitors to “Sights and Sounds of Ancient Ritual,” an exhibition at the Yale University Art Gallery on view through March 3 featuring more than 80 works spanning three millennia from the gallery, the Yale Babylonian Collection, and the Yale Peabody Museum of Natural History. The objects on view represent ancient civilizations of Greece, Rome, Western Europe, Mesoamerica, China, West Africa, the Near East, and Egypt.

Like the sistrum, the objects displayed were used in rituals. They include musical instruments, drinking vessels, artwork depicting deities, incense burners — items that made ancient rituals multi-sensory experiences that could incorporate music, wine, feasting, vivid colors, incense, and even an occasional hallucinogenic.

“Though we now encounter the ancient world through the objects displayed in quiet, contemplative museum spaces, in antiquity, the visual arts were, more often than not, intended to be used in religious and funerary rituals — rich ceremonies that would have been enhanced by both visual and auditory spectacles,” said Carolyn M. Laferrière ’17 Ph.D., exhibition curator and postdoctoral associate at Archaia, the Yale Program for the Study of Ancient and Premodern Cultures and Societies.

By bringing together objects from a number of cultures, the exhibition encourages visitors to make connections between how people across the ancient world used sights and sounds to produce vibrant rituals, said Laferrière.

Made of vivid blue and lustrous faience — a glazed ceramic — the sistrum provides the show an eye-catching opener. Hathor’s head, depicted with bovine ears and faces on either side, forms the instrument’s base. A temple-like doorway rising from the goddess’ head contained the noisemaking mechanism.

“In its very appearance, the sistrum underscores just how important a visually striking object was to ritual and how important the sounds it made were for ritual,” Laferrière said. “It’s from this one object that we’ve developed the exhibition’s themes.”

The exhibition’s first section focuses on the representation of deities. Maya gods of drunkenness decorate a drinking vessel from western Mesoamerica, forming a fearsome rogues gallery. One god holds a massive insect. Another is decapitating himself with an obsidian blade. Yet another is wielding a rock as if to throw it.

I think the message would be ‘drink responsibly’ because these are deities of death, darkness, and chaos.

“I think the message would be ‘drink responsibly’ because these are deities of death, darkness, and chaos,” said Andrew D. Turner, a postdoctoral associate in the gallery’s Department of Ancient Art, who helped organize the exhibition. “Drunkenness isn’t really a state of pleasure and merriment; it is a state of mock death.”

The Maya vessel is presented beside a Greek kylix, or drinking cup, with a similar message about responsible drinking. It shows Dionysus, the god of wine, holding out a cup requesting a refill. A satyr with a wine jug seems to be cutting him off. On each side, two other satyrs, looking soused, dance ecstatically.

“This is one of the fabulous points of comparison that we discovered in selecting objects for this exhibition,” Laferrière said. “Very disparate cultures that had no contact with each other but express very similar ideas about drinking and the supernatural.”

Dionysus appears again in a mosaic fragment, reclining as if intoxicated on a cart pulled by centaurs playing musical instruments. A fragment of the same scene features Pan, god of pastoral life and music, slumped drunkenly on a goat as someone hands him his flute.

A small tablet on loan from the Babylonian Collection bears a text in Neo-Babylonian cuneiform script composed of nine lines — each representing a string on the Mesopotamian lyre. Every line is a prayer title that equates a string, and its corresponding pitch, to the characteristics of a god, Laferrière explained.

A translation allows visitors to enter the mindset of an ancient worshipper playing a lyre and singing lyrics like, “May Daragal make you rival the fierce weapons and the raging storm,” which is the text for the third string.

The tablet transitions to the show’s next section, which highlights the importance of music and visual spectacle in ancient ritual.

“Ritual was not just about saying the right things at certain times or performing the prescribed actions, but also very much about the sensory experience,” Laferrière said. “Having a specific experience was essential to the perceived success of the ritual.”

The section on music and spectacle opens with a Greek bell krater, or large vase, with a scene of the ritual sacrifice of a goat. A fire burns on an altar at the center. A young attendant leads the doomed goat toward the altar. A priest prepares to wash his hands. Beside him, a musician plays an aulos, a double-reed wind instrument.

“Music was thought to be so essential that it was included in the scene as an element as crucial to the ritual as the sacrificial animal,” Laferrière said.

Parchment pages from 15th- and 16th-century graduals — liturgical books that contain the lyrics and musical notation to sung portions of a Mass — represent the role of music in Christian ritual. The pages are sumptuously decorated with gold leaf and intricate illuminations.

“They show the importance of the visual spectacle and auditory element for the Mass and present them together in a single evocative and elaborate experience,” Laferrière said.

The sensory experience of ancient ritual could involve interacting with deities while in an altered state. Followers of the Tiwanaku religion in the Central Andes around 500 C.E. used a snuff tablet on display to crush vilca seeds collected in the distant Amazon basin into a hallucinogenic powder that they snorted to help them commune with their gods.

The idea is not that you’re doing this recreationally, but that you’re entering into a different state so you can perceive a new layer of existence…

“The idea is not that you’re doing this recreationally, but that you’re entering into a different state so you can perceive a new layer of existence and interact with supernatural beings on that level,” Turner said.

Two ghostly earthenware figures of dancing women, drapery trailing from their arms, draw visitors into a section on funerary ritual. The figures, which date to China’s Tang Dynasty (618-907 C.E.), likely were part of a larger group of earthenware musicians and dancers. They would be placed in a tomb to entertain the deceased with music and dance for eternity, Laferrière said.

“They are among my favorite pieces in the exhibition because they are so evocative,” Laferrière said. “They are dancing with such abandon and yet we can’t hear the music they’re dancing to. There is this element of viewer interaction in these objects that was very much part of the experience of funerary ritual in China.”

In Greek and Roman mythology, the afterlife is envisioned as a realm where gods, heroes, and mythical creatures interact. Sirens were fearsome temptresses with heads and torsos of women and the legs and wings of birds, whose songs lured people into danger. They are associated with the underworld through the goddess Persephone, whom they searched for after her abduction by Hades, the god of the dead, Laferrière explained.

The creature’s musical and funerary aspects are combined in a limestone figurine of a siren singing a lamentation — her head propped on her hand in mourning.

“She seems almost consumed by her grief and lamentation,” Laferrière said of the figurine, which dates to ca. 350-300 B.C.E.

Ancient cultures from China to Mesoamerica paid homage to the dead by burning incense. Among several incense burners on view is an elaborate example from the Teotihuacan culture in Esquintla in southern Guatemala. Its lid bears the figure of a fallen warrior — his radiant eyes of inlaid mica staring out from under the beak of a bird costume, which represents the belief that the souls of warriors killed in combat transformed into birds or butterflies that lived on in a flowery paradise, Turner said.

“Cremation was an important way to transition the deceased from one state to another,” Turner said. “When incense was burned it re-enacted the practice of burning the mortuary bundle and releasing the bird or butterfly soul. The figure has a nosepiece shaped like a stylized butterfly.”

The fragrant incense might attract butterflies, thereby allowing mourners to communicate with the dead, Turner noted.

The exhibition’s final section recalls the brilliant blue sistrum that opens the show by exploring the manufacture and importance of blue pigments and faience in ancient cultures. Organized by undergraduate Daphne Martin, the Betsy and Frank H. Goodyear, Jr. ’66 B.A. Intern, the section includes digital reconstructions of the original colors of two sculptures in the exhibition from Egypt and ancient Greece, highlighting research conducted at Yale’s Institute for the Preservation of Cultural Heritage.

About the Yale University Art Gallery

The oldest U.S. college art museum, the Yale University Art Gallery houses more than 200,000 objects, both ancient and modern. The Gallery stimulates active learning about art and the creative process through research, teaching, and dialogue among communities of Yale students, faculty, artists, scholars, alumni, and the wider public.

Located at 1111 Chapel Street, the Gallery is free and open to the public. For more information about current and upcoming exhibitions, hours and directions, memberships, and more, visit the Gallery’s website here.