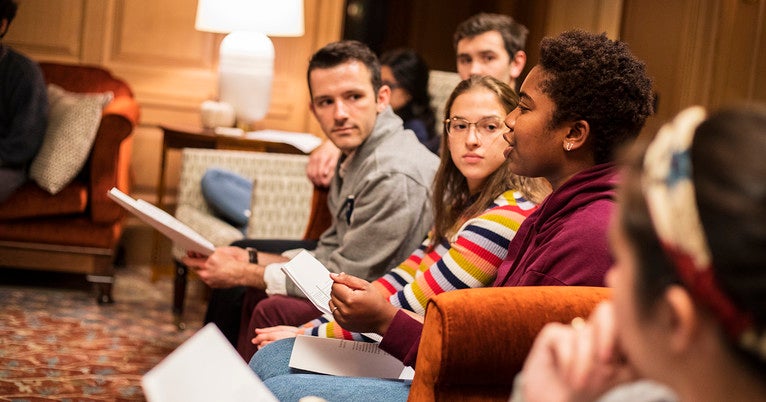 In her book “Song in a Weary Throat: Memoir of an American Pilgrimage,” Pauli Murray ’65 J.S.D. writes about defending her right to enter Harvard Law School as a woman against an unmoving bureaucracy. At the time, she jokingly told law professor Caroline Ware: “One person plus one typewriter constitutes a movement.” She explained: “Even if I could not compel admission to Harvard, at least I could raise the issue in such a way that its law school would be unable to avoid it.”

The reading was one of several given to students prior to a pre-birthday celebration honoring Murray at her namesake Pauli Murray College, one of Yale’s newest residential colleges. Beth Ward, a longtime personal friend of Murray’s, spoke to students at a tea on Nov. 8 in Murray’s honor. Murray’s Yale doctoral robe, which Ward gifted to the college, and Murray’s typewriter, which she loaned, were on display in a dedicated case in the college’s library.

Tina Lu, chair and professor of East Asian languages and literatures, and head of Murray College, says she knew little about the civil rights activist, lawyer, and co-founder of the National Organization for Women before taking the role. “Reading her autobiography and her other writings has been a revelation to me,” Lu says.  “I love how prickly and alive her voice remains, and our students respond to those traits too.”

Murray was a trailblazer who advocated for equal opportunity for African Americans and for women at a time of great divide. She unsuccessfully campaigned to be admitted to the all-white University of North Carolina in 1938, instead graduating with a B.A. from Hunter College and later a J.D. from Howard University.  Murray befriended Eleanor Roosevelt, who became a fierce advocate for Murray as she attempted to break down barriers. This included her efforts for a fellowship to study at Harvard Law. It was the convention for the valedictorian from Howard, which Murray was, to be given the Harvard Law fellowship, but the honor was denied to her because she was a woman. Despite often meeting resistance, Murray wrote eloquently of her need to dedicate her life to working toward a fully equal society.

In the essay “An American Credo,” Murray writes: “When my brothers try to draw a circle to exclude me, I shall draw a larger circle to include them. Where they speak out for the privileges of a puny group, I shall shout for the rights of all mankind.”

In addition to reading selected works and discussing her life at the residential college event, students were also treated to an unveiling of a new sculpture of Murray gifted by local sculptor Susan Clinard. At Yale Law School, Dean Heather Gerken unveiled their own homage to Murray on Nov. 18 — a portrait by artist Daniel Mark Duffy.

Murray’s birthday is Nov. 20, and each year brings new ways to celebrate her life and influence, said Lu. “Her birthday provides an opportunity to expand and amplify her reputation. She was a part of so many important causes.”