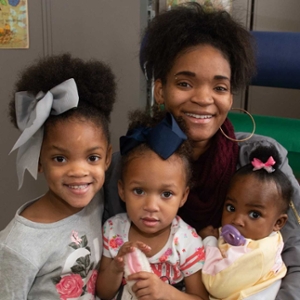 The big, beautiful eyes of Tyra Parker, of East St. Louis, filled with water as she talked about the horrifying experience of losing her home to a fire on the evening of Oct. 26. The pregnant woman’s tears remained there as she gave thanks for the lives of her four children, and the generosity of the Southern Illinois University Edwardsville community.

“I want to say thank you to everyone who contributed to me and my family. This school, and people I don’t even know from SIUE, have truly been a blessing,” said Parker, a parent at the SIUE Head Start/Early Head Start Bluffview Center. “I didn’t know what we were going to do at first. I lost everything in a blink of an eye.”

A fire that ignited a mattress started in one of the children’s room. When Parker got to the room, the mattress was engulfed in flames. Her meager attempts to douse the roaring blaze were fruitless. Parker, her four children, Antonio, 5; Au’Bree, 4; A’va, 2; Dream, 10 months; and her brother, Tony Young; all made it out safely. Antonio graduated from and Au’Bree is currently attending Bluffview Head Start.

“I got everyone out of the house as the smoke start getting bad,” recalled Parker. “The back room was completely damaged by fire, and the rest of the house had smoke and water damage.”

The night of the fire, the family was sheltered in a hotel, where they stayed for several weeks. The American Red Cross and Catholic Urban Programs in East St. Louis paid for the lodging.

Parker and her four children now reside in furnished transitional housing, paid for by an agency whose name must remain confidential.

“This has been a big relief with another baby coming,” said Parker, who is due March 27. “But they still let you know that you are homeless, because after 18 months we have to leave.”

“But I am grateful for all the outpouring of love and support we have received,” continued Parker. “People have tried to give us furniture, but I don’t have anywhere to put it. From SIUE, I have received lots of clothes, socks, gift cards and more.”

“We are so grateful for the wonderful support that the SIUE community has shown Tyra and her family,” said Kathleen Appleby, Bluffview Head Start/Early Head Start Center director. “I am proud to work at a place where the people don’t just believe in the University’s values, but live them.”

“This tragedy has showed me how truly good and kind people can be,” reflected Parker. “It has also made me grateful for the lives of my children, and make me love them even more.”

After giving birth, Parker hopes to go back to work as a forklift driver at Amazon, where she had previously worked.

With a focus on empowering people and strengthening communities, the SIUE East St. Louis Center is dedicated to improving the lives of families and individuals—from pre-school through adult—in the Metro East region. The Center offers programs that give the community renewed hope and an opportunity to reach educational, career and life goals. It does so by providing comprehensive programs, services and training in the areas of education, health, social services and the arts.

Photo:
A pregnant Tyra Parker is grateful that she and her children escaped the Oct. 26 fire that damaged her East St. Louis Home. Her children from (L-R) Au’Bree, 4; A’va, 2; and Dream, 10 months. Not pictured is Antonio, 5.