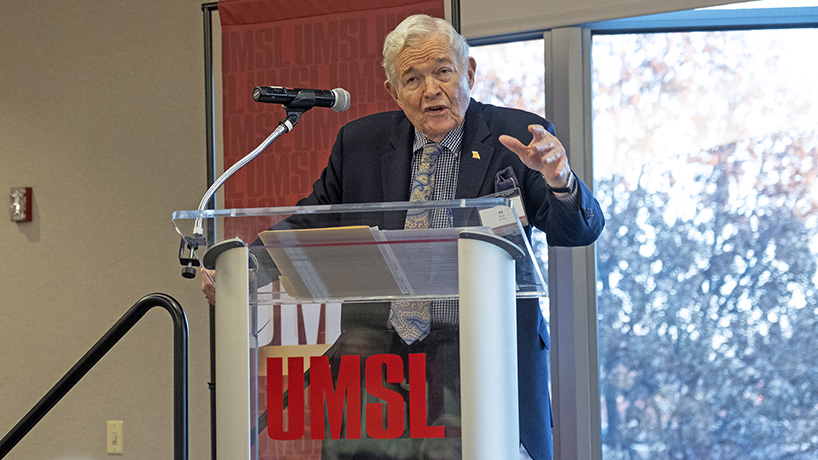 Bond served two terms as governor and four terms as senator – retiring from public office in 2010. He’s since resided primarily in St. Louis, working as a practicing attorney and chairman of Kit Bond Strategies – a firm that helps clients establish and maintain worldwide relationships. 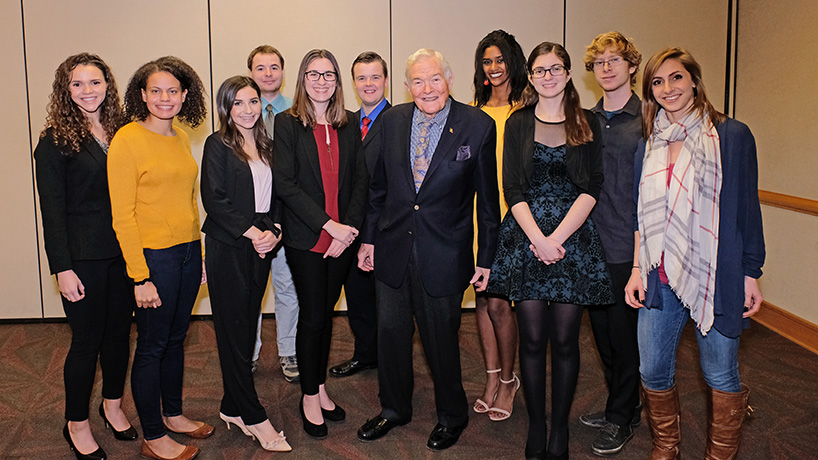 “A very special welcome to the wonderful young people who’ve been selected at the University of Missouri­–Columbia and the University of Missouri–St. Louis to be the first scholars going abroad,” Bond told the students and an audience of a few dozen people. “As I’ve told some of you, there’s so much to see and so much to learn. I can’t wait till you get back because I’m going to grill you, and I know that you’re going to be willing to talk about this and convince others that this is something they ought to be interested in.”

Bond and university officials hope to award a higher number of scholarships next year by raising additional funds and repurposing the entire lecture series endowment.

“My experiences growing up in a family engaged in international business gave me an appreciation for the interdependence that is the foundation of today’s global society and economy,” Bond said. “Throughout my career in public office, both as a Governor and as a United States Senator, and now in the private sector, a top priority for me is to help build bridges between different cultures and nations and to ensure Missouri remains competitive.

“Study abroad programs are one of the best ways to help build the relationships that are key to addressing coming global challenges. These new scholarships will empower MU and UMSL students to become the next generation of global citizens and the future leaders Missouri needs.”

Bond credited university officials, including recently retired UMSL Associate Provost Joel Glassman, the longtime director of the Office of International Studies and Programs, for driving the creation of the new scholars program.

“Kit Bond has been and continues to be one of Missouri’s leading citizens,” UMSL Chancellor Tom George said. “His list of accomplishments in service to the state and nation is immeasurable. We’re certainly thankful that he is including UMSL students in the new Bond International Scholars program – an experience that will benefit them and our state for decades to come.”

“I want to thank Senator Bond for his leadership in this area and for his recognition of the importance of global citizenship,” MU Chancellor Alexander Cartwright said. “The future of our state, the future of our country depends on our ability to be able to work within a global economy. The time that you spend internationally, you learn so much more – don’t tell the professors this – than what you can learn in a classroom. I’m so happy to be part of giving such a great group of students the opportunity to participate in an international experience.”