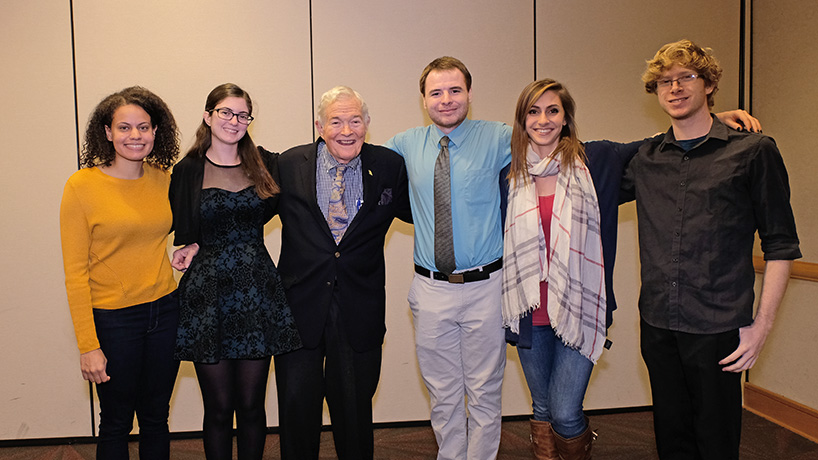 Five University of Missouri–St. Louis students have been selected as first-ever recipients of Bond International Scholars awards – providing them each $5,000 toward study abroad opportunities in spring of 2019.

The UMSL recipients were announced Wednesday during an event, where they met with former Governor and U.S. Sen. Christopher “Kit” Bond – the program’s namesake. A native Missourian, Bond served two terms as governor and four terms in the U.S. Senate. The award stems from an endowment created by the senator’s friends upon his retirement in 2010. The program includes students from UMSL and University of Missouri-Columbia.

The UMSL awardees are:

Cole Alves is a senior from St. Charles majoring in computer science. He will be going to the University of Basel in Switzerland where he hopes to learn more about artificial intelligence. He also hopes to continue his involvement in hackathons by attending a few in Europe while he is there.

Eric Eggers is a senior from Arnold majoring in Japanese. He will be studying in Tokyo at Rikkyo University. Here at UMSL Eggers has been very active on campus, particularly in his role as a founding member and officer of KHAOS, the K-pop student organization and an officer for the Japan-America Student Association.

Jordan McCain is a sophomore from St. Louis who is double majoring in Spanish and political science. She will be spending her spring semester at Pontifical Catholic University in Valparaiso, Chile. It is not her first time in South America – she spent some time after high school backpacking around – but she is looking forward to improving her Spanish in an academic environment.

Sara McFarland is a junior from Maryland Heights majoring in Japanese who will be studying at Rikkyo University in Tokyo, Japan. She is involved in a number of student organizations, including serving as an officer for KHAOS and the Japan-America Student Association.

Lauren Wilson is a returning learner and a sophomore from Manchester who is participating in the UMSL/WUSTL Joint Undergraduate Engineering Program. She will be attending the University of Limerick in Ireland this spring. Wilson wants to be an environmental engineer, so she looks forward to taking classes at UL that will help her explore that field further.