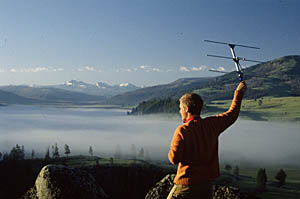 From tracking wolves in Yellowstone National Park to studying lions in Africa, Environmental Studies Professor Chris Wilmers has studied animals in the wild throughout his career.

“The world is witnessing two great ecological changes: a warming climate and the redistribution of animals across the surface of the earth,” said Wilmers. “Our work highlights how these two processes are intricately related and why we can’t fully understand climate warming without accounting for the role of animals in the carbon cycle.”

Advances in remote sensing technologies are helping scientists to better measure how global landscapes—from forests to savanna—are able to store carbon, a critical insight as they evaluate the potential role of ecosystems in mitigating climate change.

One factor often ignored in these carbon cycle assessments, however, is the role of wild animals. Compared with the vast capacity for trees and plants to store carbon, the conventional wisdom goes, low-abundant animal populations simply can’t have much effect on these global systems.

In a new paper published in Science, a team of researchers including Chris Wilmers, a professor of environmental studies at the University of California, Santa Cruz, makes the case that the very presence of wild animals can trigger direct or indirect feedback effects that alter a landscape’s capacity to absorb, release, or transport carbon. In reviewing a growing body of research, they find that animals can increase or decrease rates of biogeochemical processes by 15 to 250 percent or more.

Indeed, they argue that failure to account for the role of animals can undermine the accuracy of any evaluation of ecosystem carbon budgets. They offer insights into how researchers might integrate animal ecology, ecosystem modeling, and remote sensing to more accurately predict and manage carbon cycling across landscapes.

“The world is witnessing two great ecological changes: a warming climate and the redistribution of animals across the surface of the earth, often as a result of the loss of large predators and herbivores,” said Wilmers. “Our work highlights how these two processes are intricately related and why we can’t fully understand climate warming without accounting for the role of animals in the carbon cycle.”

Oswald Schmitz, the Oastler Professor of Population and Community Ecology at the Yale School of Forestry & Environmental Studies, and lead author of the paper, hailed the team’s findings: “Some of us have been saying for a long time that it’s not just animal abundance that matters but what these animals do that is important.”

Experimental and observational analyses have shown that changes in animal abundances can cause major shifts in capacity of ecosystems to store or exchange carbon. In some cases, these changes have even caused ecosystems to switch from carbon sources (when animals are not abundant) to carbon sinks (when they are).

In the Serengeti, for instance, the decimation of wildebeest populations during the mid-20th century allowed ground vegetation to flourish, eventually promoting wildfires that consumed 80 percent of the ecosystem annually and led to a net release of carbon dioxide into the atmosphere; when disease management and anti-poaching efforts helped animal populations recover, a greater share of the carbon stored in vegetation was consumed by wildebeest and released as dung, keeping it in the system and restoring the landscape as a CO2 sink.

In tropical forests, the conservation of large mammals maintains vital functional roles—including seed dispersal by frugivores and support of plant production by herbivores—that promote carbon storage; a 3.5-fold increase in the number of mammal species, one study finds, increases carbon retention by 230 to 400 percent.

But the presence of grazing herbivores in other places—such as caribou and muskox in the Arctic or moose in boreal forests—can cause a 15 to 70 percent decrease in CO2 uptake and storage.

Human impacts increasingly shape these relationships, whether it’s through the reduction of wildlife populations through poaching, overfishing or lost habitat, or the reintroduction of species to landscapes.

Wilmers says that humans have played a huge role in shaping animal communities, from the composition of species to the distances, directions, and speeds at which they move across landscapes.

The authors review advances in spatial ecosystem ecology that can reveal the link between animal movements and patterns of carbon uptake and storage across landscapes. And they highlight developments in remote sensing that are enabling scientists to collect and analyze data needed to make these connections.

“We show the effects of animals are large and important, but also that remote sensing can greatly inform what we know about how animals alter ecosystems through time, whether appropriating biomass through herbivory or trampling or enhancing productivity through nutrient and seed dispersal,” said Scott Goetz, a professor at Northern Arizona University who has conducted satellite remote sensing research for more than three decades, and another co-author. “New remote sensing technology, like the GEDI Lidar instrument launched this week to the International Space Station, will help us do a much better job of capturing the influence of animals on plant biomass and productivity dynamics.”

The impact of wild animals on the carbon cycle becomes increasingly relevant as researchers and policy-makers consider the use of natural ecological processes to recapture and store atmospheric carbon within ecosystems as a tool to tackle climate change.

“They think that animals either aren’t important enough or that you can’t take up carbon and conserve animals in the same landscape,” he said. “Our message is that you can and should. It can be a win-win for both biodiversity conservation and carbon uptake.”