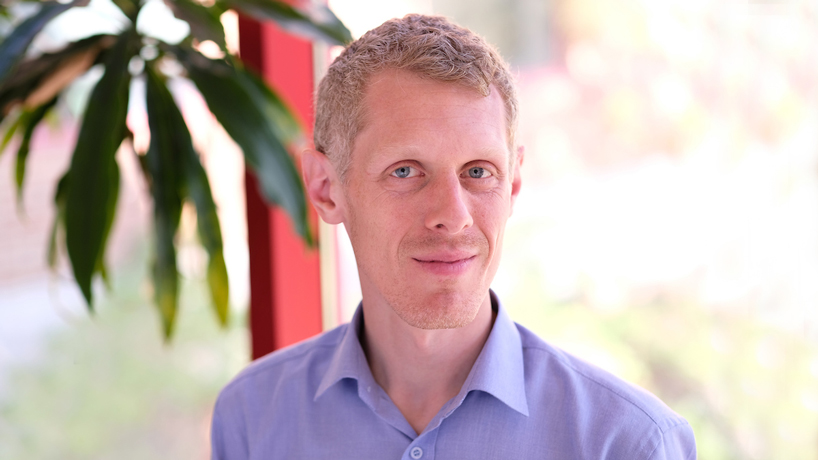 Alumnus Robbie Hart, now a curator at the Missouri Botanical Garden, is part of a network of scientists doing work as part of the Global Observation Research Initiative in Alpine Environments. (Photo by August Jennewein)

Robbie Hart and his colleagues spent a dreary week earlier this year in the mountains of western Bhutan. They were doing fieldwork below Mount Jomolhari, studying the effects of climate change on Himalayan flora as part of the Global Observation Research Initiative in Alpine Environments, more commonly known as GLORIA. They had a film crew with them, but it left after a few days of limited visibility in the cloudy, rainy, frankly depressing conditions.

Before their work was finished, Hart, a PhD graduate in biology from the University of Missouri–St. Louis and now an assistant curator at the Missouri Botanical Garden, joined his colleagues for the long ascent up to their highest field site, more than 4,900 meters above sea level. 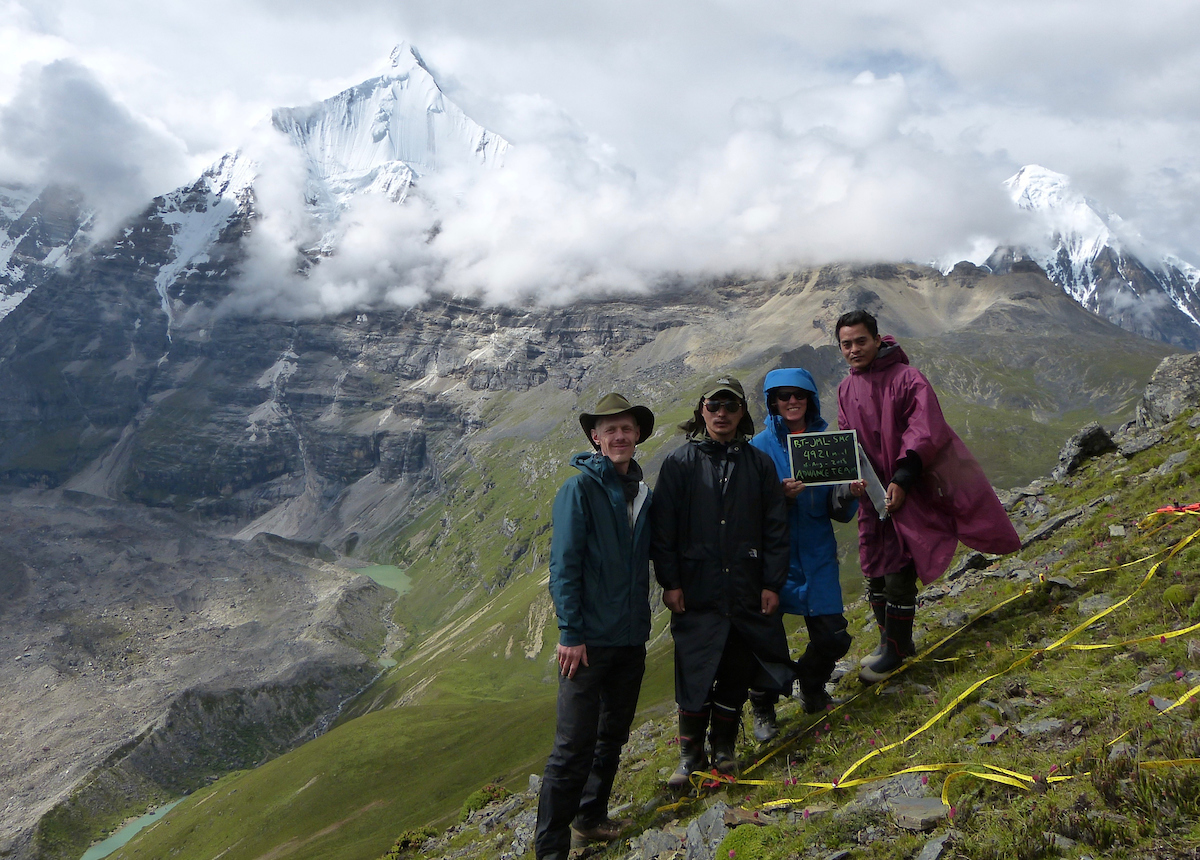 Alumnus Robbie Hart, at left, and his research partners celebrate an ascent to their highest field site on Mount Jomolhari, 4,900 meters above sea level. (Photo courtesy of Robbie Hart)

The weather cleared as they got closer to the peak, and by the time they arrived, out of breath, at the top, Hart found himself gazing in amazement at Jomolhari and the other summits that emerged before him.

“Is this really my life?” he thought to himself.

Hart took a roundabout path to get where he is after growing up the son of two biologists in proximity to the Olympic Mountains in Washington.

He used his time as an undergraduate at Swarthmore College to study linguistics, and it was that work that first brought him to the Himalayas as he spent time doing research in Nepal.

Hart was fascinated by the rich information about the natural world he found packaged into the languages of local and indigenous people. After finishing his degree, he assisted noted linguist David Harrison on the book “When Languages Die,” which documented how this environmental knowledge can be lost when speakers of these place-based languages switch to speaking a global language such as English or Chinese.

Hart also started looking into graduate programs, including some in anthropology and environmental science. But he was drawn to a National Science Foundation-funded studentship working with Jan Salick of the Missouri Botanical Garden to research changes in biodiversity and local livelihoods in China’s Yunnan Province while pursuing a degree in ecology, evolution and systematics in UMSL’s Department of Biology.

He got a jump start on his fieldwork with assistance from two scholarships through the Whitney R. Harris World Ecology Center designed to help new students to rapidly begin collecting preliminary data. Ultimately, his dissertation contained three chapters about the ecological and evolutionary implications of the changes he observed and another on the ethnobotanical significance, including knowledge within local languages.

Hart learned of the garden’s involvement with the GLORIA network and the permanent plots it was tracking in the Himalayas during his time as a doctoral student. He even got involved in some of the work as a side project while writing his dissertation.

He felt fortunate to be able to make that a central part of his work when he joined the garden’s research staff full time after earning his PhD. He now makes annual trips to the Himalayas to do fieldwork.

“We’re on the mountain for maybe two weeks,” Hart says. “Then we also spend time doing ethnobotanical work, doing interviews with local people about their perceptions of climate change and how climate change is affecting them.”

The high-elevation plants he studies often have important medicinal uses or make their way into beauty products, aromatics and food supplements.

Hart believes it’s important to educate a broader audience on the significance of climate change on these useful mountain plants. Earlier this year, he submitted a plain-language summary of the work his collaborator Hassan Sher is doing in Pakistan’s Swat Valley in the Western Himalayas and won a BioOne Ambassador Award for his efforts.

This story was originally published in the fall 2018 issue of UMSL Magazine. If you have a story idea for UMSL Magazine, email [email protected].