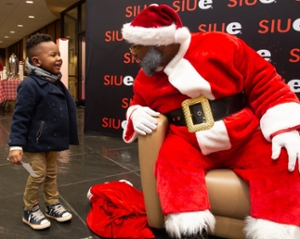 “I want a black dump truck,” 4-year-old Charles Johnson told Santa. Charles is the son of junior Tyrone Johnson, who is majoring in exercise science. 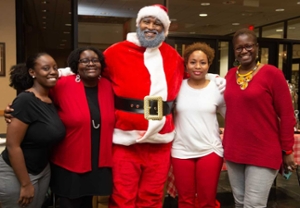 “It was a surprise to see Santa at SIUE,” said Johnson, “but then Santa goes everywhere.”

“This can be a stressful time for us all with it being the end of the semester and final exams approaching. Having an African-American Santa visit us today brought holiday cheer along with a demonstration of our commitment to diversity,” said Lakesha Butler, PharmD, BFSA president, and clinical professor in the School of Pharmacy. “It especially warmed my heart to hear several students say this was their first encounter with a Black Santa.” 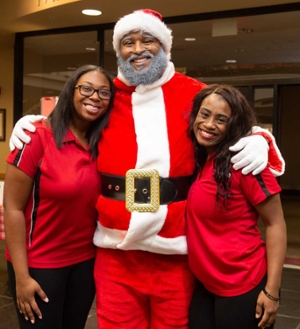 “I thought it was fun. It was a creative way for us students to interact with faculty and staff,” said LaShata’ Grayson, graduate student majoring in College Student Personnel Administration. “This is also a good way for SIUE to further show we are family oriented. Also, as an African American student, I appreciated having a Black Santa. It shows diversity, equity and inclusion.”

Greeting Santa are (L-R) Tarsha Moore, assistant director of the Center for Student Diversity and Inclusion; Jessica Harris, PhD, interim assistant provost; BFSA President Lakesha Butler, Pharm D, and clinical professor in the School of Pharmacy; and Kathryn Bentley, director of the Black Studies program and associate professor in the Department of Theater and Dance. 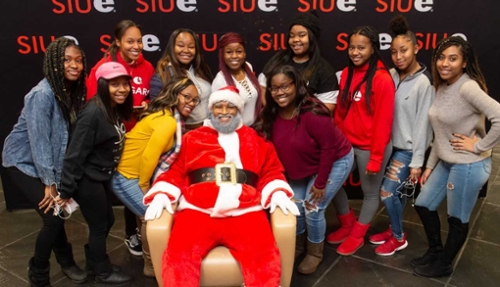