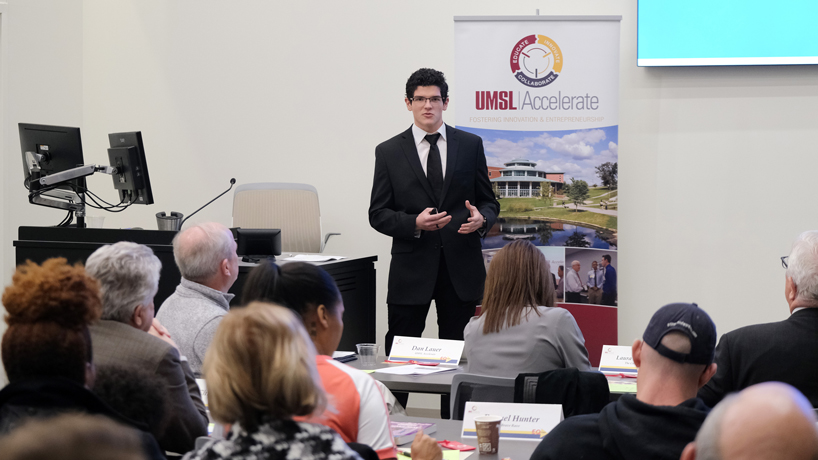 Mechanical engineering student Tim Bragg pitched his startup, Blue Automation, during the EQ Student Accelerator competition on Nov. 29 in Anheuser-Busch Hall. His company was one of 11 selected for the first cohort. (Photos by August Jennewein)

Tim Bragg was in the process of outlining his plans to create the first autonomous asphalt sealer on Nov. 29 when a timer sounded, preventing him from explaining further.

The University of Missouri–St. Louis student had just five minutes to sell a panel of 10 judges on his complex business idea during the first Entrepreneur Quest Student Accelerator pitch competition. Through a swift but thorough presentation, he did so successfully.

Bragg will now join a group of 10 other semifinalists to form UMSL’s first cohort in the EQ Student Accelerator program, a University of Missouri System initiative that launched in September. The accelerator offers educational programming, mentorship opportunities and a chance at $15,000, $10,000 or $5,000 for students on each campus.

The individual pitch competitions hosted at the four universities are the initial steps toward earning the top three cash prizes. 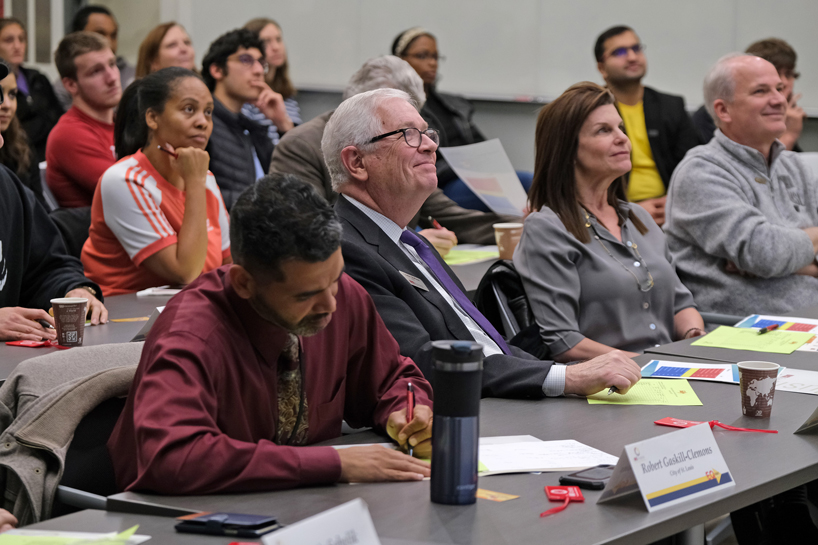 A crowd of community members, students and UMSL administrators, including College of Business Administration Dean Charlie Hoffman (center), gathered to hear the student pitches on Nov. 29.

“I say a lot that 90 percent of being an entrepreneur is showing up,” Founding Executive Director of UMSL Accelerate Dan Lauer said during the pitch competition hosted in Anheuser-Busch Hall. “Showing up tonight demonstrates your commitment. There were 17 students selected for tonight, and to get here was a lot of work. We talk about educate, innovate, collaborate – this is the first step in that journey. It’s a great time to be an entrepreneur and innovator at UMSL.”

While only 17 startups could earn a spot in the pitch competition, the UMSL Accelerate team received 37 applications that represented six of UMSL’s schools and colleges. The accelerator program is intended to be multidisciplinary, so administrators are pleased by the initial student response.

“We are excited about our entrepreneurial program as well as UMSL Accelerate,” said Kristin Sobolik, UMSL’s provost and executive vice chancellor for academic affairs, “because it really infuses the academic community in the types of learning experiences they need to go out into the real world and make the St. Louis region successful.” 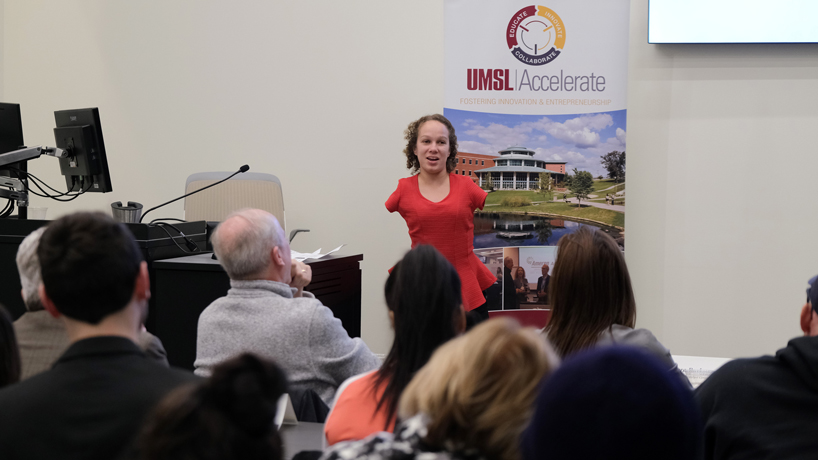 Letisha Wexstten, who was born without arms, was motivated to develop HireMe, a LinkedIn-style app that helps individuals with disabilities find jobs, after struggling to find work herself. She will now have a chance to compete for $15,000, $10,000 or $5,000 as a member of the first EQ Student Accelerator cohort.

During the pitch competition, students stood in front of a panel of 10 judges that included community entrepreneurs and business practitioners as well as UMSL faculty, alumni and administrators. The judges were tasked with narrowing the field to 11 teams that could participate in the eight-week educational program that begins in January.

In addition to Bragg, the selected students, which were announced Thursday, include: