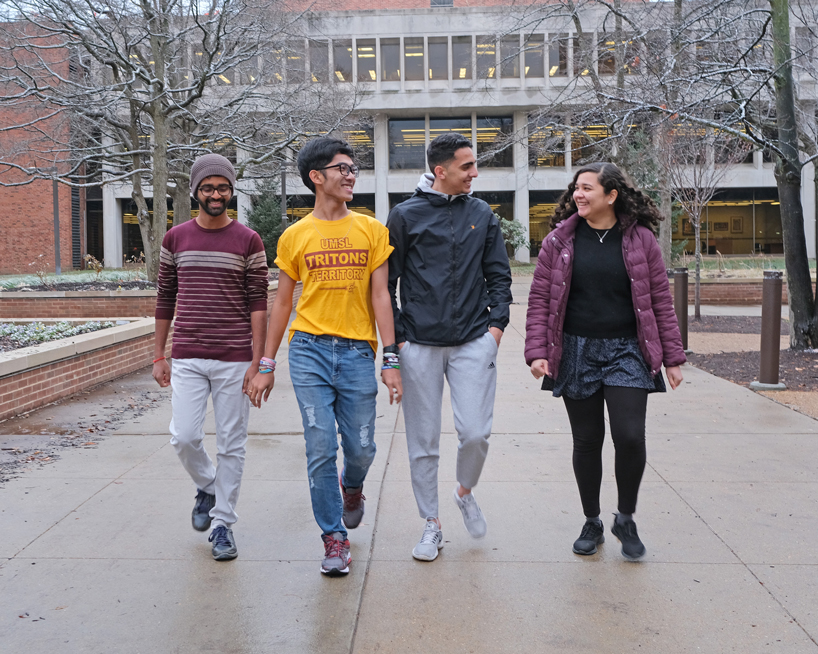 Global UGAD and Global UGRAD-Pakistan students (from left) Prem K., Oudom Von, Isaac Alzaghari and Sudenly Bello stroll through the Quad during one of their final weeks at UMSL. The international students participated in a semester-long exchange program and will return to their home countries on Friday. (Photo by August Jennewein)

Editor’s note: Per Global UGRAD-Pakistan guidelines, a student participating in the program is referred to by only his first name and last initial.

Within a few days in November, Oudom Von logged more travel time than he ever had in his life.

The week started on the northeastern edge of the United States with stops in Philadelphia, New York and New Jersey. Then he headed west with a one-day stop in his temporary St. Louis home before catching yet another flight to California.

While an extensive travel schedule for anyone, it’s particularly impressive for an international student who had first stepped onto a plane three months earlier.

“I hopped on and off airplanes, trains and buses. It was crazy,” he said of his cross-country excursion. “I couldn’t believe that I could do it, but I’m glad I did. Life in the United States has taught me how to be more independent. It’s been one of the biggest turning points of my life.”

In between his travels, the Cambodian native has spent the fall semester at the University of Missouri–St. Louis thanks to a new partnership with the Global Undergraduate Exchange Program. The U.S. Department of State-funded program offered scholarships to three students to study at UMSL for the semester, and a fourth student joined the cohort through Global UGRAD-Pakistan.

The scholars who traveled to UMSL include Von, Sudenly Bello of Venezuela, Prem K. of Pakistan and Isaac Alzaghari of the Palestinian territories.

“These students were selected from a massive pool of applicants, and they are exceptionally bright,” said Melanie Tucci, the students’ international advisor. “I have spent a lot of time with these students since they arrived, and they are fantastic young people who made a great impact on our campus during their short time here.”

The goal of both programs is to provide undergraduate students with cross-cultural understanding and the tools to provoke civic and economic changes in their communities. Global UGRAD sponsors students from 63 countries and territories and received 4,880 applications during the 2018-19 academic year. Ultimately, 251 students were selected and matched with 78 host institutions.

Alzaghari’s academic interests are focused on the Israeli-Palestinian conflict, on which he has been able to gather a different perspective through the five courses he’s taking this semester. He’s enrolled in three classes that cater toward his political science minor and has found that he’s been able to better retain what he’s learning thanks to the teaching methods of his UMSL professors.

While the academic interests and career aspirations vary between the students, they share a curiosity about other cultures and a desire to improve their communities. They each saw the Global UGRAD experience as a way to satisfy those interests.

“What’s so special about Global UGRAD is that they don’t just pay for you to study abroad, they have a lot of requirements that help you better understand the United States and American culture,” Von said. “We are doing community activities and are engaged with the local people in the United States in addition to the academic purpose.”

To become better ingrained in their new communities and gain a deeper understanding of local culture, students are encouraged to become involved on campus and are required to participate in community service projects. The students also lived in Oak Hall, allowing them to experience all the offerings of campus life.

“At the beginning, it was a little bit hard to adjust to a new environment. Everything was new for me,” Prem said as he reflected on leaving Pakistan for the first time in August. “But over time, I got involved on campus and made friends from different parts of the world. Now it is a second home for me.”

He became so comfortable living in another country that he hopes either go to Germany or return to the United States for an astronomy graduate school program. Bello shares the same sentiment and hopes to continue studying anthropology outside of Venezuela upon graduation this summer.

But as she prepares to return home for at least a few months, she plans to take back lessons on persistence and self-determination.

“One of the things that I learned here is that if you want to do something you don’t need to be depending on other people,” she said. “It’s a hard reflection, but if you trust yourself, you can do it – no matter how many obstacles you have in your path. The only limitations you have are the ones that you place on yourself.”

And while Von has slowed his travel schedule to focus on school, he’s eager to resume his new hobby.

“This experience has been life changing and a big twist in my life,” he said. “It’s taught me not to be narrow-minded or just looking around my environment, but to go over to see things on a more global scale. I’m studying international relations, so I have to see the outside world rather than just being at home. I’m trying to find a way to go out and see the rest of the world.”