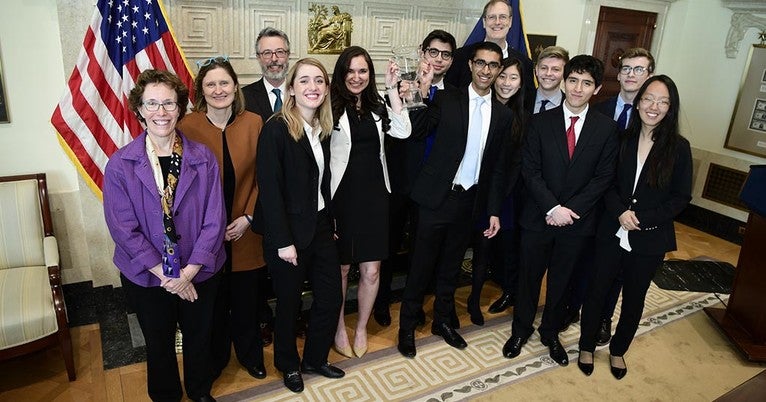 A team from Yale has won the Federal Reserve’s College Fed Challenge, in which competitors analyze the nation’s economic and financial conditions and make monetary-policy recommendations in the style of the Fed’s Open Market Committee.

The finals were held on Nov. 29 in Washington, D.C. at the Eccles Building, which houses the offices of the Board of Governors of the Federal Reserve System. The teams gave 15-minute briefings on their analyses and policy prescriptions, followed by a question-and-answer session before a panel of judges.

William English ’82 B.A., the team’s faculty adviser and professor in the practice of finance at the Yale School of Management, praised the undergraduates for their hard work and dedication.

“They threw themselves into the competition in a serious way,” said English, who was director of the Division of Monetary Affairs and secretary to the Federal Open Market Committee at the Board of Governors of the Federal Reserve System from 2010 to 2015. “I think all of them would make very good candidates to work at the Fed one day. They are all very capable in this area. They showed a lot of interest, a lot of knowledge, and a lot of brains.”

The team advanced to the finals by winning the district competition, which was held at the Federal Reserve Bank of Boston in early November.