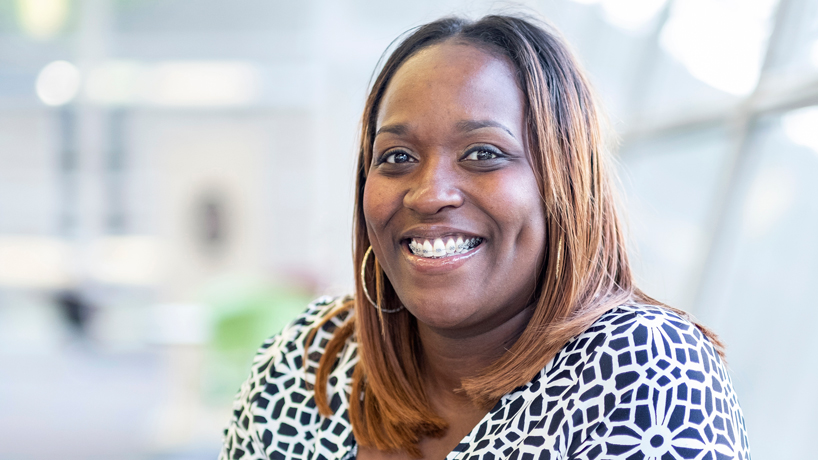 During her time at UMSL, Kristin Bass assumed guardianship for her two nephews following the death of her mother. She had to take some time off school but returned determined to finish her degree and earned her MEd in 2014. (Photo by August Jennewein)

By the time her mother passed away in August 2011, Kristin Bass was less than a year into her course of study for an MEd with an emphasis in adult and higher education at the University of Missouri–St. Louis.

Bass took over guardianship of her nephews, Kenneth Moore and Kristopher Conner, for whom Bass’ mother had been caring since Bass’ sister passed away in April 2006.

It all got to be too much for Bass, who stepped away from school for more than a year. Still, she kept her goal of graduation in mind. And she had a powerful ally in UMSL College of Education Associate Dean Shawn Woodhouse, who explained that one of the most important program goals is student retention.

“Dr. Woodhouse helped me whip my life into shape when it was falling to shambles,” Bass says. “I didn’t know how to deal with it. You don’t really know what to do, but I knew not to stop.”

Bass returned to UMSL and earned her MEd in 2014. While progressing toward her degree, she started as a graduate assistant in the Office of Student Financial Aid and was promoted to financial aid coordinator by the time she left the school’s employ in 2016.

While in the department, she took over a financial literacy program that her predecessor Tiffany Izard started, finished its components and turned it into a hit on campus, exporting it to different departments and showcasing it to prospective students.

“She has always struck me as a person with an amazing resilience,” Woodhouse says. “It has a lot to do with her inner drive to want to impact others within the community in some very significant ways.”

In February, Bass started a job with the Hazelwood School District, working as the assistant to Deputy Superintendent Natasha Baker. Her primary role is project management, and part of her duties involve evaluating the discipline system and figuring out ways to help students through tough times in their lives, like Woodhouse did for Bass during her break from UMSL.

The higher education MEd emphasis, catered to students who are interested in working as staff or administrators in educational environments, helped prepare her.

“You want to get students in the mindset of planning for the future and hope that will guide some of their behaviors now, so they can rethink some of those decisions they’re making,” Bass says.

Her nephews came through the storm as well: Moore is in medical school, and Conner is a junior at the University of Central Missouri. Bass says she can’t take credit for their success, though. They were just as important to her as she was to them.

“I can say with 100 percent certainty that I would not be where I am had it not been for God’s grace and a support system that valued not only where I was wanting to go but that was willing to help me put one foot in front of the other,” Bass says. “That’s my obligation now.”

More information about programs in the College of Education can be found at COE.umsl.edu.