Science of Addiction Symposium is first step for UM System to provide solutions for Missouri - EduBlog.News 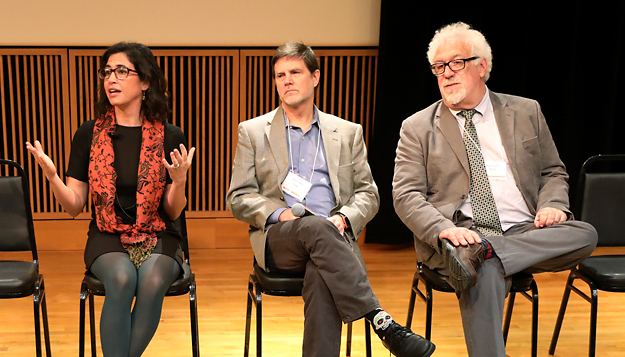 On Dec. 6, researchers from across the University of Missouri System (UM System) and the nation’s leading addiction experts gathered at the Bond Life Sciences Center on the University of Missouri-Columbia (MU) campus for the Science of Addition Symposium. The symposium also attracted policy makers and healthcare providers from across the state. Participants had the opportunity to collaborate, learn about the latest developments in addiction science, and take new knowledge back to their communities.

The symposium marks the beginning of a new era for an improved relationship between the UM System and the citizens of Missouri. UM System Vice President for Research and Economic Development Mark McIntosh provided opening remarks that set the tone for the event.

“This symposium is a very good first step, but it’s not the only one. The University needs to be in a position to offer the sustained research and patient care contributions that Missourians need,” he said.

McIntosh also announced the UM System’s commitment to developing the Missouri Center for Addiction Research and Engagement (MO CARE). He described the goals for the center, saying “MO CARE will address the growing needs of Missouri’s citizens affected by addictions, by training treatment providers in enhancing remote access to care. Importantly, MO CARE will increase the investment of state and federal funding to maximize exceptional interdisciplinary addiction research and training programs at MU and across the UM System.”

Throughout the day, over a dozen UM System faculty described their research findings and shared their experiences, with the hopes of fostering collaborations and getting fresh perspective from colleagues. The presentations were notably diverse and addressed the problem of addiction from multiple perspectives, including: basic research on the consequences of substance abuse; the culture of alcohol use on university campuses; and Missouri’s response to the opioid overdose crisis.

Guest speakers at the event included Sandra Brown from the University of California San Diego and Robert Messing from the University of Texas at Austin. Both researchers have close ties with MU faculty and noted the uniqueness of the UM System, particularly for its ability to host a high-quality research symposium that was open to the public with no cost to attend.

A recurring theme among UM System presenters was the issue of turning their findings into solutions for all of Missouri’s communities. Rachel Winograd, a researcher from University of Missouri-St. Louis (UMSL), emphasized the need for health and social workers to use inclusive evidence-based strategies and outreach methods to combat the opioid overdose crisis. In a moment that demonstrated the new collaboration between the UM System and the state, an aide from Senator Roy Blunt’s office took the opportunity to ask Winograd what the next steps in the federal response to the overdose crisis should be.

The collaborative spirit and community-oriented sense of purpose was furthered emphasized at the end of the symposium, when UM System Chief Engagement Officer Marshall Stewart described a call that he had recently received from Missouri Governor Mike Parson’s office.

“The interesting thing about the call is they wanted to know, and this is a quote, ‘What can we do to help you?’… What that says is that we have begun to change the narrative a little bit about how we’re here to help… That’s a different tone than it was here 2 or 3 years ago… It’s a good thing and it’s because we’ve changed that narrative across the state.”

As reiterated by many speakers at the event, the Science of Addiction Symposium is only the first step for UM System researchers to provide solutions for Missouri’s problems and build a better relationship with the state’s citizens.