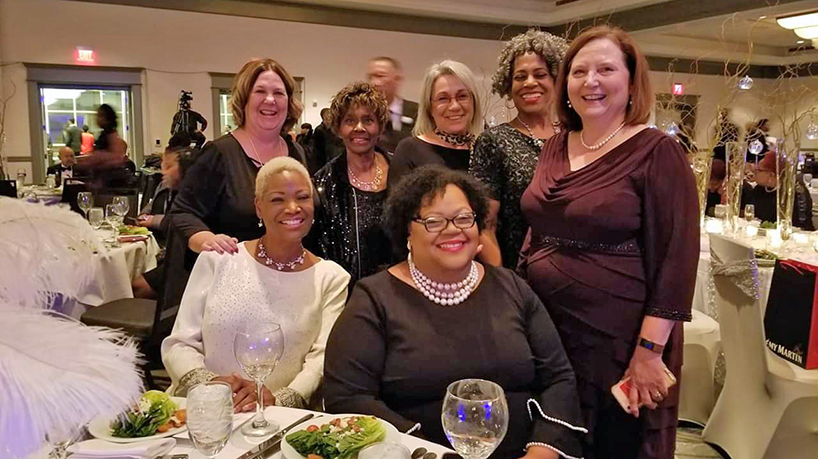 Sheila Grigsby believes in being a servant to the community. That is why, in 2010, she jumped at the opportunity to lead a group of nursing students for a day of preventative health screenings done in neighborhood barber shops conceived by the nonprofit 100 Black Men of Metropolitan St. Louis.

In the years since, the University of Missouri–St. Louis College of Nursing assistant professor of community health has rendered the Barbershop Tour virtually unrecognizable.

First, she recruited a collaborator in Keon Gilbert, an associate professor in Saint Louis University College for Public Health and Social Justice. She expanded the single day of screenings to each Saturday for two months. One group of clinical students transformed into the entire cohort – about 80 from UMSL and 20 public health students from SLU. The resulting Barbershop Tour now serves more than 300 community members a semester in barbershops spanning the many neighborhoods that comprise the greater St. Louis area.

On Saturday, she was recognized for her contributions.

During its annual gala, the 100 Black Men awarded its Pillar Award for Health and Wellness to Grigsby and Gilbert in recognition of their efforts for the Barbershop Tour.

“Sheila has worked very diligently with us, with the Barbershop Tour, to help bring some heightened awareness about health issues that affect the communities that we serve,” Board President Leroy Shumpert said. “It’s important because it’s really taken the needs to the community. Sheila and the student nurses at UMSL have been a tremendous partner with us in making sure we provide these services.”

Grigsby first heard the good news from Lennie Harrison, the 100 Black Men Health & Wellness Division Leader who coordinates the efforts from the nonprofit’s side.

“Well, I was really shocked,” Grigsby said. “I mean, I don’t do this work looking for awards or recognition. I really believe that what we are doing is important and needed in the community.  I want to show the nursing students that we can make a difference one person, one barbershop at a time.”

The tour first came to be in 2009 as a project between the 100 Black Men and an eight-student clinical group from SLU. The modern iteration is a collaboration among UMSL, the 100 Black Men, Saint Louis University and the City of St. Louis Department of Health. In 2018, the program ran on Saturdays in March and April and took place in 10 locations each month. The students provided blood pressure and diabetes screenings and educated patrons on HIV/AIDS and prostate cancer. Each day of volunteering started in a central location, where Grigsby, Gilbert and Harrison passed out supplies and gave last-minute instructions to the students.

“Barber shops are very unique, and they are neighborhood specific,” Grigsby said. “The barbers and beauticians that we interact with are key leaders in the community. The barber shop is where people come to talk about problems and the issues of the day.”

The to-be nurses participate in the tour during their last semester before graduation. Aware that the students haven’t had much experience interacting with patients outside of a clinical setting, Grigsby and Gilbert designed simulations where the 100 Black Men members act as patrons.

“Based on the responses that I have received from students, they were a little nervous going out,” Grigsby said. “Once they go and get into the shops and see how excited and appreciative the patrons, barbershop owners, barbers and beauticians are, they feel more comfortable, and really appreciate the experience with community members.”

She explained that the tour can be life changing for the students who are exposed to new communities and experiences. They also get a chance to mingle with the SLU students, many of who are advanced professionals such as social workers or doctors. But the largest benefit goes to the community members.

“The benefits are just so large for the community because they see the presence of these nursing students,” Grigsby said. “The patrons may not go to a doctor, but they will talk to the nursing students. I can’t tell you the number of times the students will come back and say, ‘I can’t believe everything they told me.’ This just demonstrates that nurses are critical in the health-care field, and sometimes the only point of entry that people have. We are the most trusted profession.”

Throughout the 10-plus years the Barbershop Tour has run, Grigsby and others have tracked data and collected patron surveys. As a result, this year the tour incorporated a dietician who performed healthy food demonstrations, and the organizers are in the process of thinking about the logical next steps, which might include new interventions or programs. First, however, there’s a lot of data to collate and much thinking to do about what might benefit the community the most.

In addition to the tour, Grigsby and her nursing students assist with 100 Black Men’s Community Health Day, an effort to increase awareness and raise research funds for tackling prostate cancer. In this, she finds a personal angle: Her father is a longtime prostate cancer survivor.

Grigsby came to UMSL in 2007 after working for the St. Louis City Department of Health and last year achieved a tenure-track position after completing her PhD. Her area of research is HIV prevention in the St. Louis African American community, and she primarily works with the faith community to spread awareness.

“I believe, now, it would be very hard to find someone who has not been personally touched by someone in their life that is living with HIV or has died from the complications,” she said. “The challenge is to continue to be innovative in ways to keep congregations engaged because they have many competing demands other than just addressing a particular issue or health issue. I’m working with congregations to develop health ministries and to find ways they can incorporate this information into the work they are already doing, which has been key in allowing us to continue to do this work. I feel strongly that we need to do everything we can.”