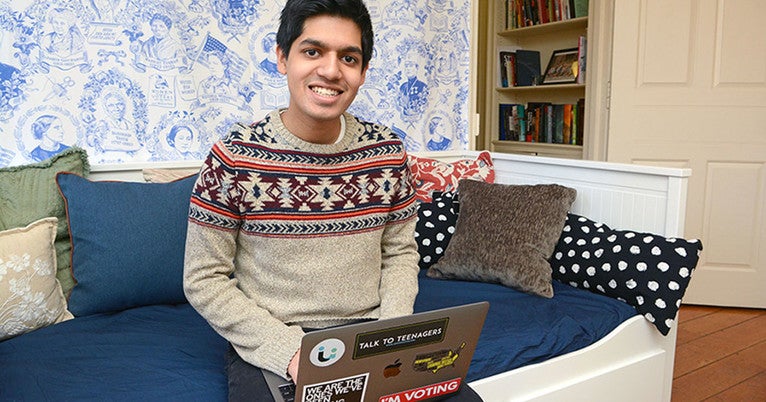 On his official website, Yale sophomore Ziad Ahmed describes himself as “just your average teenager grappling with identity, struggling to balance it all, pursuing his passions, and spending way too much time on Twitter.”

As of this writing, he had not yet added to his biography the fact that he was recently named to Forbes’ annual “30 Under 30” list, which takes note of what the magazine calls “the brashest entrepreneurs across the United States and Canada” who are under the age of 30. Ahmed was cited for his work with JÜV Consulting, a youth-run company he co-founded while still in high school.

The Forbes list features just over 600 individuals who are “shaking up some of the world’s stodgiest industries,” says the magazine, which this year divides the group among 23 categories. Ahmed and his JÜV co-founder Nick Jain are included in the “Marketing & Advertising” category; other honorees are listed in the categories of Art & Style, Law and Policy, Music, Social Entrepreneurs, Sports, Energy, and more. See Forbes’ full list.

As CEO of the now highly successful JÜV Consulting, the 19-year-old Ahmed works to give teens a voice in the business world. “Juv,” he explains, is the Latin root for the word “young” in numerous languages, as well as part of his company’s tagline: “rejuvenate your brand.”

Through a global network of nearly 150 young people between the ages of 14 and 22, JÜV Consulting provides advice to and shares ideas with companies, non-profits, and campaigns reflecting the perspective of Generation Z to help shape their clients’ products, social media campaigns, marketing tactics, and more. Among the clients JÜV has worked with are Viacom, Edelman, Unilever, and American Express. JÜV also has a network of over 1,000 young people that clients can send surveys to as well as get insights from.

I believe that instead of talking about teenagers, they should be talking to us.

“There are a lot of companies and individuals talking about the power of young people right now,” says Ahmed. “But I believe that instead of talking about teenagers, they should be talking to us. With JÜV Consulting, I hope to empower hundreds of young people by giving them real seats at the table and providing them with legitimate agency and economic opportunity. We identify and co-create products, campaigns, and ideas with our clients. We believe the world looks better and brighter when young people are part of something.”

Ahmed divides his time between Yale and New York City, where he and other members of JÜV Consulting’s executive team share an office in Times Square. Several fellow Yalies are also involved in the start-up: Harry Westbrook ’21 is the chief financial officer; Nico Trigo ’22 is a senior partner; and Neal Soni ’22 serves on the company’s technology team.

Ahmed has arranged his schedule so that he can take his Yale courses three days during the week and spend the other four days in New York.

As an eighth-grade student, Ahmed founded a teen organization called Redefy, which seeks to foster inclusivity and tolerance in schools and communities through the sharing of stories and discussion. The organization now has chapters across the country and around the globe. For his efforts to promote acceptance and tolerance, Ahmed was recognized by former President Barack Obama, was selected by the We Are Family Foundation as a 2017 Three Dot Dash Global Teen Leader, and was named runner-up of MTV’s High School Trailblazer award, among numerous other honors.

“I started to think about what it meant for me as a teenager to have a seat at the table when so often young people are left out of the conversation or treated as if we didn’t want to be there,” says Ahmed of the recognition. “I also realized how much misunderstanding there is about my generation. The current models of understanding young people are broken. Research takes so long to come out, and by the time it comes out, trends among young people have shifted. The memes and the vernacular that we use change every day.”

Being able to take part in discussions with a network of “incredible” young people was one of his inspirations for JÜV Consulting, Ahmed says, noting that he wanted to find a way to share the resource of teen intelligence, spirit, boldness, and commitment to making the world a better place.

JÜV Consulting began to take off after having some lucky breaks, among them articles about the marketing company in Bloomberg Business Week and in The New York Times.

“The New York Times article this past summer has opened so many doors for our company, which has since grown tremendously,” says Ahmed. “My days in New York are now filled with meetings with leaders of Fortune 500 companies, and then I’m usually doing emails till about 2 a.m. It has been pretty non-stop. Our most recent board meeting lasted 11 hours.”

Ahmed says the teen consultants for the company are selected via a rigorous application process and are purposely as diverse as possible. It is important to him and other JÜV executives that the company also have a social impact: The firm partners with nonprofits that work with underserved youth in order to offer resources to those groups as well as to have some of those students join the JÜV network, and Ahmed says that the young consultants also “push” companies to be mindful of their own social impact and responsibility.

We’ll… say to a company: ‘Put your money where your mouth is. If you claim to care about an issue, don’t just say it — do something about it.’

“We’ll ask a company to make an ad less heteronormative, for example, or say to a company: ‘Put your money where your mouth is. If you claim to care about an issue, don’t just say it — do something about it,’” Ahmed explains. “We encourage companies to empower young people. We get to partner with each other to come up with bold and constructive ideas to make tomorrow better.”

Originally from Princeton, New Jersey, Ahmed says he fell in love with Yale while participating in the Yale Young Global Scholars Program, a summer enrichment program for high school students. He says he hasn’t had a moment’s regret about his campus choice.

“I think Yale is one the most intellectually curious and politically active campuses,” says the Yale sophomore. “Here, you can be up at 2 a.m. and talking about the geopolitics of Myanmar. I wanted to be somewhere where I could learn not only from top professors but also from the activists around me. New Haven has a strong tradition of community-led activism.”

Ahmed is as yet undecided about his major but says he is interested in political science, global affairs, cognitive science, and psychology. “My interests basically boil down to ‘the mind and the world,’” he says, noting that he has a special interest in how social media in politics affects group behavior. Among the most influential courses he has taken so far, he says, are Nahid Siamdoust’s seminar “The Politics of Culture in Iran,” Zareena Grewal’s “Islam in the American Imagination,” Molly Crockett’s “Neuroscience of Decision Making,” and Mercedes Carreras’ “Legal Spanish.”

Despite the time he commits to managing a company, Ahmed has also devoted himself to as many extracurricular activities as he can manage. Last year, he volunteered for New Haven’s Leadership, Education & Athletics in Partnership Program as a Timothy Dwight Community Engagement Fellow and was active in the Yale College Democrats and the Muslim Student’s Association. In addition, he served on the executive board of the Yale International Relations Association (YIRA) and was executive director of Yale Model United Nations Institute, a week-long residential summer program for high school students. This year, he is continuing his engagement with YIRA and currently serves on the board of the Model United Nations Team at Yale.

“I may not be experiencing Yale like a typical student because I’m not here on the weekends, but when I am here, I want to be fully here and experience the amazing things Yale has to offer,” he says.

Beyond Yale, he has been an adviser to Women’s March Youth Empower and has served on the marketing advisory board of DoSomething.org, a digital platform for mobilizing youth to take action. He served on the organizing committee for the March 14th national youth walkout to protest gun violence and designed the t-shirts worn by many participants in the walkout. Last summer he also worked part-time for Eighteen x 18, which encourages young people to vote.

The son of Bangladeshi immigrants to America, Ahmed says that his family has always encouraged him to “ask hard questions and to interrogate the world around me.”

“I’m very grateful for the privilege I’ve had in my life,” he says. “I am very lucky for the opportunities I’ve had. Hopefully with my company I can fight for more people to have opportunity.”

Ahmed and JÜV Consulting co-founder Nick Jain, who is also 19, are the youngest people in their category on the Forbes “30 Under 30” list, and are among the youngest individuals honored in any category. They learned of the honor the day Forbes posted the list.

“I was very excited to make it on there before I turned 20,” says Ahmed. “It’s really exciting that I can be a full-time student at Yale and get that recognition. I’m anxious to keep growing and moving and to increase the social impact of our company.”