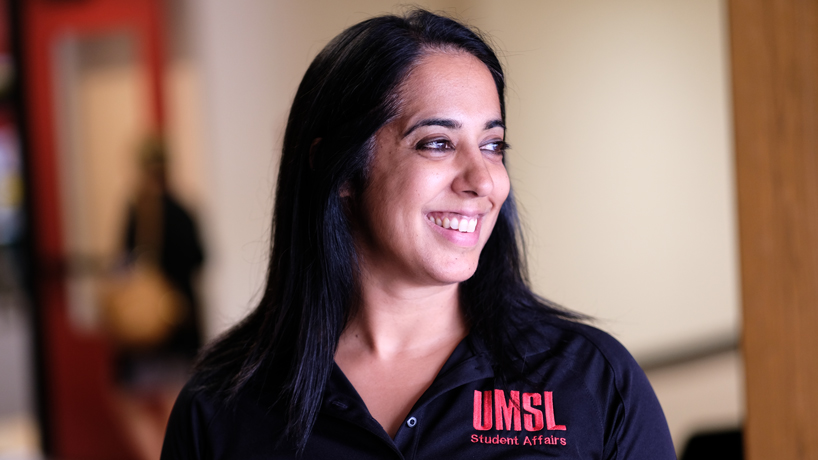 Robin Kimberlin, who holds degrees in political science and social work from UMSL, serves as the head of the university’s Student Social Services office, which creates programs to help students address issues such as alcohol and drug misuse, food insecurity, unstable housing or homelessness, crisis intervention and securing resources for students who are parents. (Photo by August Jennewein)

In the broadest terms, Robin Kimberlin is a social worker. Within that profession, she describes her specialty as “higher education case management,” which could end up being just about anything.

“In the field, you might work with only people who are homeless, veterans, people with addiction, or people with health disparities, for example. But here, we see a really diverse set of issues and people,” says Kimberlin, who serves as the associate director of Student Social Services at the University of Missouri–St. Louis. “The thing they have in common is they’re college students. It’s exciting, it never gets old and it’s very challenging. I didn’t know I wanted to do this, but I’m definitely hooked.”

Kimberlin started as the official social worker for the UMSL Division of Student Affairs by happenstance: She was finishing up her research assistantship with now School of Social Work Dean Sharon Johnson right around the same time student affairs was looking for a candidate to head a pilot program aimed at helping students who lacked basic needs.

Kimberlin was game to take on the role as a practicum for her MSW, with which she graduated in 2012.

Now, Kimberlin employs another case worker in the department and takes on a couple of UMSL practicum students each year. She estimates that her team helps 100 to 150 students a year through case management as well as 700 to 1,000 through efforts to quell food insecurity.

She credits Associate Vice Provost D’Andre Braddix and Vice Provost for Student Affairs and Dean of Students Curt Coonrod for giving Student Social Services the autonomy to grow organically at a time in which universities around the country are also realizing a need for dedicated social workers for their students.

“The need just kept coming,” Kimberlin says. “The more I communicated to campus that I was here, the more students I was able to serve. We’re mostly connecting students to resources in the community and on campus. We’re just helping students with any type of barrier going on in their lives that isn’t academic related.”

That has taken the form of creating programs that address issues such as prevention of alcohol and drug misuse, food insecurity, unstable housing or homelessness, crisis intervention and securing resources for students who are parents, which is an experience that’s especially familiar to Kimberlin. She had her first child during her junior year at the University of Missouri–Columbia.

She moved back to St. Louis, finished her political science bachelor’s degree at UMSL in 2002, then after staying home with her children, came back for her MSW.

“My kids have kind of grown up on a college campus, which is really cool,” Kimberlin says. “That’s something I definitely talk with student parents about. You might feel guilty that you have to study and do homework, but college will always be a part of your kids’ lives because they’re watching you.”