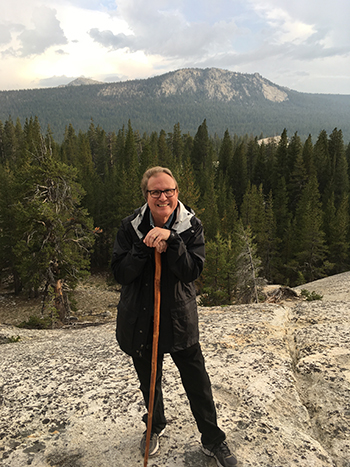 UC Santa Cruz literature lecturer Gary Young has just released That’s What I Thought, a new poetry collection which has been honored with the Lexi Rudnitsky Editor’s Choice Award from Persea Books in New York City.

Young’s eighth book of poetry, it contains a number of poems included in his recent limited edition artist’s book, In Japan, and features his own artwork on the cover.

“That’s What I Thought includes poems written over the past several years that investigate place, and how the external world generates and sustains a landscape of memory,” said Young. “I think that grammar can provide a kind of map that will guide us through the topography of a poem, and that we locate ourselves at the coordinates of internal maps drawn from experience and relived through recollection and reverie.”

“These poems address specific places and events that I’ve internalized, and which have become enduring, immutable aspects of my identity—my life as a parent, and my home in the Santa Cruz Mountains, but also my bonds to Wyoming, Mexico, Italy, and Japan,” he added.

Young has additionally just published Precious Mirror–a book of Zen priest Kobun Chino Otogawa’s calligraphy with Young’s translations from the Japanese–as part of the Companions for the Journey series from White Pine Press. The calligraphy includes original poems, as well as quotes from Zen Master Dogen, and from ancient texts.

“I met Kobun many years ago when he was living at my friend Hollis DeLancey’s house in Bonny Doon,” said Young. “After Kobun died, I was asked to print a memorial letterpress edition of a selection of his calligraphy. I spent a couple of years going through it, letting it soak in, and finally pulled out a selection I thought would make a good grouping and would also reproduce well.”

“After I’d compiled the group, I was asked if I’d be willing to translate the texts. I said yes, of course, and two weeks later I was in the zendo at the Hokyoji Temple in Japan.”

Young spent a week there, where he met Aramaki Noritoshi, a retired professor of Buddhism at Kyoto University, who agreed to help him with his translations.

“I spent three weeks working out the often hard-to-read calligraphy, prepared a rough translation, then a more ‘poetic translation,’ then spent a day with Aramaki making sure I was grasping all the Buddhist allusions,” Young recalled. “The poems and the bits of scripture are short, but naturally, there’s a lot packed into them.”

Young graduated from UC Santa Cruz in 1973 and received his M.F.A. from UC Irvine in 1975. He has taught poetry as a lecturer in creative writing in UCSC’s Literature Department since 2005. Young is also the director of the Cowell Press, where he teaches printing and book arts.

His previous books include Pleasure, Hands, The Dream of A Moral Life (winner of the James D. Phelan Award), Days, Braver Deeds (winner of the Peregrine Smith Poetry Prize), and No Other Life (winner of the Poetry Society of America’s William Carlos Williams Award for best book of the year published by a university, literary, or independent press).

Young’s print work is represented in collections including the Museum of Modern Art, the Victoria and Albert Museum, and The Getty Center for the Arts.

That’s What I Thought includes several poems about wildfires Young experienced near his home in the Santa Cruz mountains. Here are two fire poems from the book—the first is about the 2008 Martin Fire in Bonny Doon, and the second reflects on the 2009 Lockheed Fire in the same area.

The blaze spread quickly through the heavy brush, crowned
in the pines, and exploded in the redwoods. Flames rose and fell as
if the woods were breathing fire. My family was safe, evacuated
from the mountain, but I stayed behind to save the house if
I could. I sat in the dark and smoked a fat cigar, blew smoke at
the smoke that rose from the ruin of the forest. Sparks flew all
around. Everything was turning to smoke and snowy ash. I took
a breath, and held it. –Gary Young

The fire grew larger every day, an enormous arrow of flame
pointed at our house. For three days I hiked through the woods
to avoid roadblocks, and watered the garden and my trees. The
air was tinted yellow by the smoke, and even things close at
hand seemed far away. The few birds that remained sang songs
I didn’t recognize, songs I’d never heard. Our house was saved,
but when the flames turned away for good, I felt defeated. If it
all had burned, we’d have been free. Holding nothing but a few
photographs and a single suitcase, we might have carried on,
moving fast, traveling light. –Gary Young