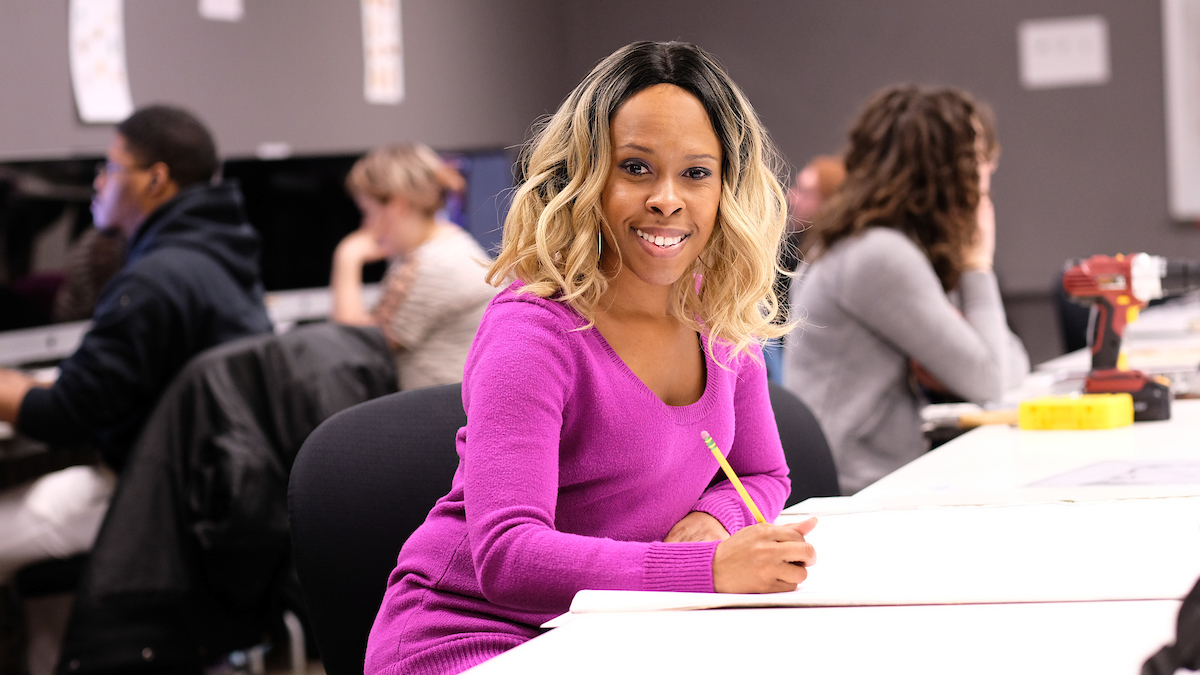 Trista Lewis was looking for an escape.

The University of Missouri–St. Louis marketing major had all but filled out her schedule last spring – including an economics course and another in supply chain – and knew she’d be taxed as she completed them.

“I was looking for a way to de-stress,” Lewis said.

She met with her advisor, who started throwing out some possibilities. That’s when she first heard about Studio Art 1080 – the Comics & Cartoon Illustration course taught annually by Professor Dan Younger in the Department of Art and Design.

Lewis, whose favorite things when she was younger included cartoons, Archie comics and Super Mario Bros. on Nintendo, didn’t need much persuading.

“Yeah, I think this is it,” she remembered telling her advisor. “It was something fun, something different. It wasn’t expected, but it was just a stress-relieving kind of thing.”

Lewis had no idea the impact it would have on her, even prompting her to add graphic design as a second major to go with her existing marketing emphasis. She hopes that will pave the way for a career that lets her use her artistic skills and creativity.

Younger, who debuted the Comics & Cartoon Illustration course at UMSL in 1997 after teaching a similar course at Louisiana Tech University, welcomes students to see the course the way Lewis did.

“It’s like sandbox,” Younger said. “If you go into an English class, you go into a math class – that’s work. In art, this is playtime, and if they don’t deal with it as if it’s playtime, it’s pretty silly because it really is. Just relax in here and draw some silly comics.” 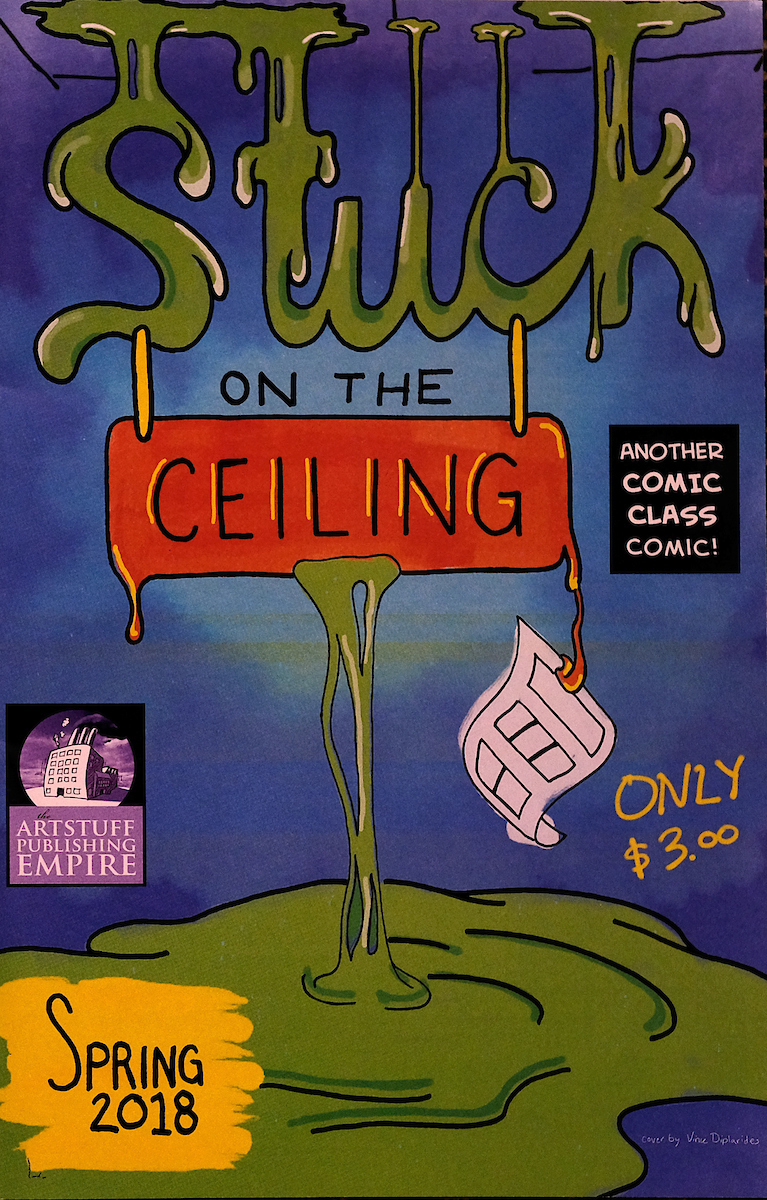 “Stuck on the Ceiling,” published this fall, was the latest comic book produced by Dan Younger’s Comics & Cartoon Illustration class.

Which isn’t to say Younger doesn’t demand a great deal from each of his students.

Among the students’ first assignments are drawing 100 heads and also coming up with a lengthy set of emotions.

“It was really a challenge,” Lewis said, “because you sit and think about emotions like happy, sad, angry – you have these basic emotions that you think of – but then once you draw those and you run out of ideas, you’re like, ‘Oh my goodness, I have to think of something else?’

“So you think about drawing distressed or curious, but how do you draw curious?”

It tests a student’s creativity.

Younger also has the 15-member class work on drawing each of their characters from different angles so they start to think beyond two dimensions.

It’s all building up to the second half of the semester when the class works on producing its own comic book with each student getting between two and four pages to tell an original story.

Younger’s been helping students create comics – first every other spring and more recently annually – for more than 20 years.

The finished products – printed by Ka-Blam Digital Printing – are now being collected by the St. Louis Mercantile Library on the UMSL campus as well as in three other museums: the Billy Ireland Cartoon Library & Museum in Columbus, Ohio; the Cartoon Museum in London; and the Missouri History Museum.

“Finding out our work was going to be distributed besides just at UMSL was really amazing,” Lewis said. “It definitely was a perk to the class.”

It can also add a bit of pressure.

Younger splits the class into two groups and assigns one student in each to act as editor, a role Lewis filled last spring.

“She was so good,” Younger said. “She cracked the whip and was really moving them right along – very responsible for getting that organized and getting that done.”

He works with each student on creating a narrative that can be developed through its conclusion in a short amount of space.

Lewis found inspiration for her story from her own experiences growing up and being short. She put her favorite alien character in her shoes in “Don’t Call Me Short” as he waits in line to ride a roller coaster only to be denied when he doesn’t meet the minimum height requirements. The alien gets his revenge when he zaps the operator into a pile of ashes, clearing the way for the alien’s joyride. 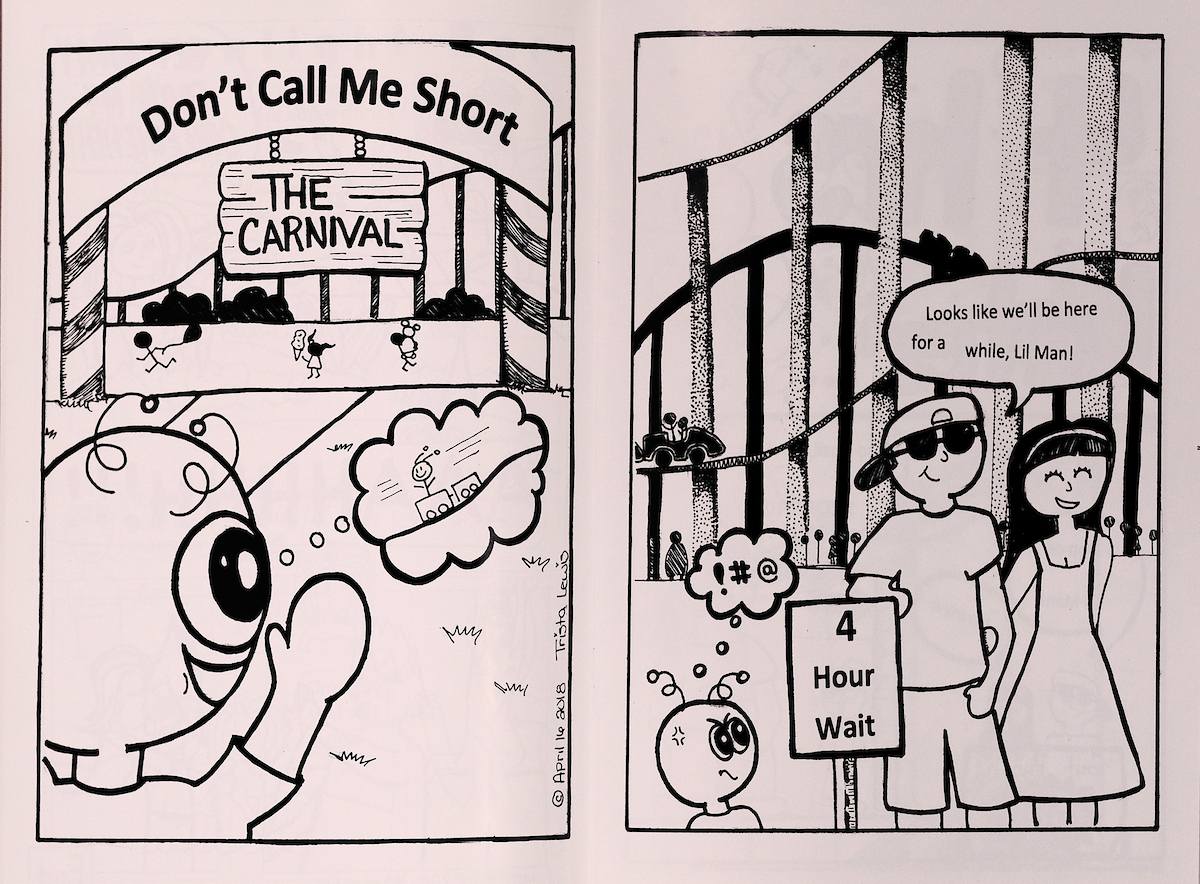 Trista Lewis found inspiration for her comic, “Don’t Call Me Short,” from her own experience being unable to measure up to the height requirements at amusement parks growing up.

“I just wanted to make it fun and kind of light-hearted and definitely something that my kids could read,” Lewis said.

Lewis worked on the project throughout the spring, watched closely by her two kids. Her son even took the opportunity to start drawing comics alongside her. So it was rewarding earlier this fall when she received her copies of the finished product, titled “Stuck on the Ceiling,” and could show them.

By then, Lewis had already gotten more than she dreamed out of the class.

“I finished last semester and went to my advisor and said, ‘I want to do graphic design,’ because I wanted to stay in the art industry and do something that I love,” she said.

Lewis has been searching for the right career path ever since a stint in the United States Army and more time as a military spouse to her husband, Kevin, that had her living as near as Kansas and as far as South Korea.

She came back home to St. Louis and enrolled at St. Louis Community College–Forest Park I the spring of 2015 to get back in the groove of going to school.

She toyed with studying petroleum engineering but knew a job would take her farther away from home than she wanted to be. Then she thought about microbiology but changed her mind after her first chemistry lab course.

Lewis settled on marketing shortly before she made the decision to transfer to UMSL, attracted in part by the presence of the Veterans Center and after being admitted into the Pierre Laclede Honors College.

She thinks she can find a way to fit both of her majors together in a future career.

“I always wanted to do more of the advertising aspect of marketing,” Lewis said, “so that’s what I’ve stuck with.”

The art requirements needed for a BFA have forced her to push back her expected graduation a bit, but she believes it’ll be worth the wait.