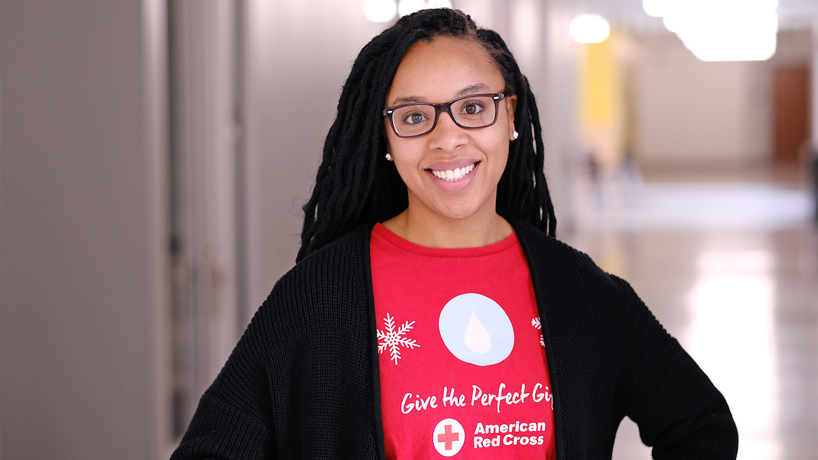 Destiny Walker hopes to enroll in an osteopathic medical school after graduating from UMSL. (Photo by August Jennewein)

Destiny Walker saw the proud faces of her mother, Alicia, and siblings among the crowd at the Mark Twain Athletic Center Saturday afternoon during the commencement ceremony for the College of Arts and Sciences at the University of Missouri–St. Louis.

But Walker could only imagine her father, Marcellus, there too, holding balloons and cheering her on in that voice people couldn’t help but pay attention to.

She received her BS in biology, making her the first member of her family to earn a four-year degree.

Walker’s father died suddenly with about a month remaining in the fall semester of 2016, and his passing has served as further motivation for her to reach this point, not only finishing college but planning to pursue a professional degree in osteopathic medicine.

“He taught me confidence in myself,” Walker said while reflecting recently. “He taught me perseverance and to be self-driven. He was also my biggest cheerleader and my supporter. He would call me and just see how my grades were, see how the exam went. It was great having him around.”

She’s determined to fulfill the dream she’s been chasing with her father’s support since she was in middle school in Sedalia, Missouri.

Her family had moved to Columbia by the time she started high school. After earning her diploma, she moved to St. Louis, wanting to forge her independence while remaining close enough to home.

Walker first enrolled at St. Louis Community College–Florissant Valley, spending two years there fulfilling her general education requirements before transferring to UMSL. She cited the affordable tuition as one of its biggest selling points. Walker received the UMSL Gateway Transfer Scholarship in each of her first two years and this semester benefited from the Degree Completion Scholarship.

UMSL also has proved to also be an ideal learning environment.

“I like all the professors, and I think they have enlightened me in a way that I couldn’t have asked for,” Walker said. “I know way more than before I came here. Also I think the people, the students – my colleagues – have been very respectful, and they’re very diverse. They have an inviting spirit. I think it’s a great community.”

Walker has worked throughout her academic career to pay her own tuition, spending the past seven years in customer service for UnitedHealthcare.

She did have to take a semester off because of financial hardship but finished out the semester in the fall of 2016. As the oldest of his and Alicia’s seven children, she took the lead in making arrangements for her father’s funeral in Kansas City, where he was living at the time of his death.

“It was a hard time,” Walker said. “Had I known, I probably would have worked with the teachers a bit better, but you have to understand, during that time you’re not really thinking about your teachers or contacting UMSL.

“I kept persevering. I finished the semester, and I did pass all courses, and that was just by the grace of God.”

In addition to her major in biology, Walker is also finishing with a minor in chemistry. She added it so she’d have more coursework to prepare her for the MCAT exam she’s scheduled to take in March before applying for medical school.

Walker is focused not on the more common MD degree but on becoming a DO.

“With the DO, they believe in healing mind, body and spirit, so working holistically,” Walker said. “It’s not just hey, ‘Let me give you blood pressure medications with all these side effects and treat the symptoms.’ No, let me look at you holistically and maybe you can change your lifestyle – exercise more, lose sodium in your diet. I’m more passionate about that, and I’m actually one that practices it.”

She’s followed that approach in dealing with her own health, lowering her blood pressure after being diagnosed several years ago with pre-hypertension.

Walker hasn’t pinned down what specialty in medicine she’d like to have. Maybe surgery. Maybe family medicine.

No matter what, she’s aiming to support patients and families in their time of need.

“When people are vulnerable, they just look for someone to help them, so why not me?” she said. “Not just that, I do have a passion for medicine and for the body. There are so many things that we still don’t understand about the body, and guess what, I can be the person that may find something that no one else knew. I won’t ever stop learning.”