Professor Anne Underhill, who is chair of the Anthropology Department, has collaborated with archaeologists at Shandong University, China, on regional surveys and excavation work since 1995—initiating one of the first Sino-American archaeology projects— to help understand the changes in regional settlements and economic organization that took place during the prehistoric and early Bronze Age periods in the Rizhao area of southeastern Shandong province. China is home to many important discoveries in world archaeology, and the on-going international collaboration is one of the longest. I recently sat down with Professor Underhill to learn more about the collaboration over the years between Yale and Shandong University and the discoveries that have resulted from it. The following is an edited excerpt from our conversation.

How did the collaboration with Shandong University come about?

I first met archaeologists from Shandong when I was doing my dissertation research in 1987 about changes in pottery production during the late prehistoric period of northern China. I approached them in 1994 about doing collaborative archeological research after the government of China gave permission for foreigners to be involved in collaborative fieldwork. They were very welcoming from the beginning and said, “Yes, we’d be glad to work with you.” We developed an archaeological survey project in the Rizhao region that started in 1995. It was one of the earlier Sino-foreign collaborative projects that actually got off the ground in China, and I’ve been very lucky to work with this university ever since.

Those early days must have been an exciting time for you!

Yes, it was! And it still is exciting all these years later. In the beginning, we did a long-term regional survey, and 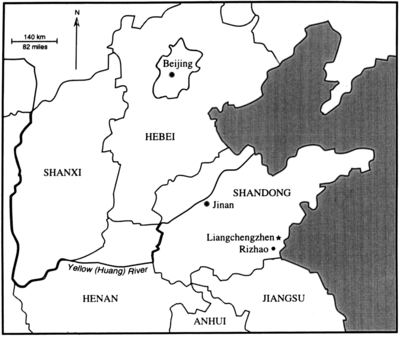 that means walking over farmers’ fields looking for broken pieces of pottery and stone tools on the surface of the ground to get an estimate of what may be underneath—what kind of settlements were there, and their approximate size. Later, we got permission from provincial and national administrators to excavate at one of the bigger settlements in the region called Liangchengzhen.

What was happening in the region during this time period?

The late prehistoric Longshan period is before the first dynasties developed, roughly from 2300 to 1900 BC. It’s a dynamic period when urbanization was taking place. Very large settlements were developing along with more than one kind of craft production, and social systems were changing. It’s also a period before any bronze metallurgy was fully in play. There are sites that are known from this late prehistoric period all over the Yellow River valley and other parts of China as well. It seems to be a period when people were experimenting with trying to get metallurgy to work, but in our area the ceramics were the kind of craft product that really represent a high level of sophistication in technology. It’s thought that there was already a very highly developed sense of social hierarchy, since some very large burials were found in the province with really beautiful black, shiny pottery and thin pottery. The pottery caught my eye immediately and I began to want to know what kinds of craft specialists made the pottery, how was it used, did every member of society have a right to use the pottery, and what was put in the burials versus what was used in daily life.

What have been some of the results of your collaboration? 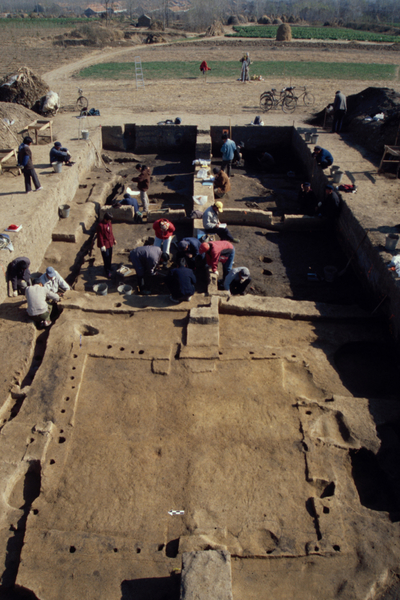 At the time I developed this collaborative project with colleagues at Shandong University, much of our understanding about the Longshan period was from burials. There hadn’t been as much information, at least in the English literature, about the settlements. We all agreed to do an excavation of a large site in the Rizhao area that we were terming as a regional center. We wanted to know just what kinds of people lived here and what activities were they involved in. Since 1995, we’ve had a number of publications on the survey component summarizing what we learned about the period as a whole and on the excavation component that speak to those questions. The culmination of the excavation was a four-volume site report, titled 两城镇—1998-2001 年发掘报告(Liangchengzhen—1998-2001 excavation report, edited by the Sino American Collaborative Team/中美联合考古队 （栾丰实/Luan Fengshi， 文德安/Anne Underhill， 于海广/Yu Haiguang， 方辉/Fang Hui， 蔡风书/Cai Fengshu， 科杰夫/Geoffrey Cunnar, which was published in 2016 by Wenwu (Cultural Relics) Press in Beijing. Last year the report received first prize from Shandong Province for excellence in recent publications in the social sciences (history).

This past October, a conference on the archaeology of Shandong province was held, along with a signing ceremony for renewal of the MOU between the archaeology programs at Yale and Shandong University. Why are both events significant?

The conference, “Early Cities and Economy: The Development of Urbanism, Regional Politics, and Economic Networks in the Shandong Peninsula before the Rise of Empire,” was held on October 25-27 at Columbia University’s Tang Center and co-sponsored by the Council on East Asian Studies at Yale. It was a collaboration between Shandong, Columbia, and Yale. It was the first time there had been a special academic conference on the archaeology of Shandong. Archaeologists from universities and archaeological institutes around the world attended, along with scholars from New York universities and Yale.

For the signing of the renewal of the MOU, the new president of Shandong University traveled to Yale. Shandong University is a very large University with several campuses, and its leaders are very forward thinking. They have seen how people like me and Yale students have opportunities to do research and travel abroad, and they would like to see the same opportunities for their students. I’ve had more than one PhD student here originally from Shandong University and visiting scholars as well. I would like to see what we can do to increase the flow of students and faculty between our two universities, and my colleagues from Shandong, who had been here previously, are very enthusiastic about it.

What does the future hold for Yale’s collaboration with Shandong University? What do you hope to discover?

Our ongoing research on the composition of pottery vessels excavated from Liangchengzhen is beginning to address the issue of local production versus exchange of vessels between settlements. So far it appears that there were many households producing both the coarse wares used for cooking and the fine, black wares. We plan this year to excavate a smaller contemporary settlement to the south– and by analyzing the composition of its pottery and stone tools, to learn whether any products were exchanged with Liangchengzhen. This will be important to find out, since early urbanization in other areas of the world often involves changes in regional economic organization including specialization of some kinds of craft production and exchange of goods. I am very grateful to the Council on East Asian Studies, my colleagues in Shandong, other international collaborators, and many at Yale for support of my team’s archaeological research.